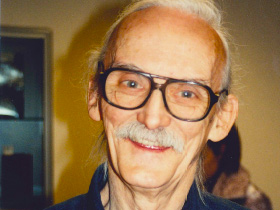 John Haag was an English professor at PSU who wrote three books of poetry.

John Haag was born April 6, 1926, in Sandpoint, Idaho. He went on to be a Professor at the Pennsylvania State University and has published three volumes of poetry. He retired after thirty years at that institution. Haag passed away in 2008.

John Haag was born April 6, 1926, in Sandpoint, Idaho, to Joseph Paul and Bertha Belleville Haag. After he graduated high school, he immediately started work causing a seven-year gap between his high school graduation and his freshman year of college. Before entering college, he served four years in the Merchant Marine during the Second World War. He was a graduate of the University of Washington and had a Fulbright Fellowship at Reading University in England.

While at the University of Washington, Haag was a Woodrow Wilson Fellow. Since he was seven years older than most students at the University, he was not involved in many typical undergraduate activities; however, he did spend time guiding the younger students. He graduated from the University of Washington as a member of the Phi Beta Kappa honor society. Haag also served in the United States Navy during the Korean Conflict. In 1988, he married Corene Johnston (his second wife after a first brief marriage).

Haag took a position at the Pennsylvania State University (Penn State) after graduate school where he taught English for more than 30 years. Some of his poetic influences included Theodore Roethke, James Wright, and Stanley Kunitz. Haag published three collections of his own poetry: The Mirrored Man (1961), The Brine Breather (1971), and his award-winning collection Stones Don't Float: Poems Selected and New (1997). Critics praised him for his ability to manipulate form and for the musical and lyrical aspects of his poetry.

When asked where he gets the inspiration for his poems, he stated, "Anywhere I can get it—mostly life itself! When something hits you as having a deep relevance I use it!" Many of his poems reflected directly on his life and his experiences in the Merchant Marines. InStones Don't Float, he hada whole section of poems devoted to the sea, one of which was "Sea Song."

The breast of the sea
swells in the fresh
breeze:
on the sand
the sea leaves
love marks:
in love
change must be constant.


On the bay, bulls heel,
rail awash, wind
ripening the sails: so
blood floods and fills.

In the water, sand
and wind, the sail
and swelling blood,
I feel you flow
and bend--
flesh and spirit held
in the same arching move:
the tongue of love.

Stones Don't Float also won the 1996 Ohio State University/The Journal Award in Poetry. Haag also had the honor of his poem, "Eggs," being set to music and performed by a local children's choir, which was done to celebrate State College's centennial and was titled "Mother Nature."

Following his retirement from teaching at Penn State, John Haag lived in Bellefonte, Pennsylvania, and was involved in the community there and surrounding the university. He frequently contributed letters regarding politics to the editor of Centre Daily Times (the local newspaper of State College).

In 2001, his poem "If a Simple Meditation Works, Trust It," from Stones Don't Float, was selected for publication by the Public Poetry Project of the Pennsylvania Center for the Book.

John Balaban, known for his translations of Vietnamese poetry and preserving ancient Vietnamese scripts, is a former student of Haag's and wrote the poem "For John Haag, Logger, Sailor, Housepainter, Poet, Professor, and Grower of Orchids," which appeared in the 2007, Volume 19 of War, Literature & the Arts: An International Journal of the Humanities.

After a period of declining health, John Haag passed away at the Hollidaysburg Veterans Home on November 24, 2008.