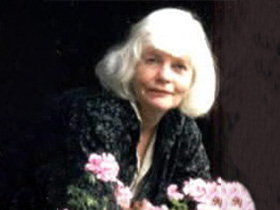 DuBois native, Ruth Halcomb is the author of books such as Money and the Working Ms (1974).

Freelance writer Ruth Halcomb was born in DuBois in 1936. Married twice, she has supported herself throughout her career as a writer, as both an in-house staff writer for companies and as a freelance writer of essays for magazines. She has also published several books aimed at helping women financially and in other dimensions. At the time of this writing, Halcomb lives in Santa Fe, New Mexico, and runs the Network for Living Abroad.

Ruth Halcomb was born on January 16, 1936, in DuBois, Pennsylvania. She was the daughter of Charles and Eliza Moore. Following her secondary education, Ruth Moore attended Antioch College in Ohio, earning her bachelors degree there in 1959. She took a leave during her time at Antioch to study at the University of Besan??on in France for the 1957-1958 school year. After graduation, Ruth Moore moved west to California and held a series of positions as a copywriter for a number of firms there. In 1968, she married for the second time (she does not speak of the first marriage) Jay R. Halcomb; the couple would divorce in 1976. She has one child from her first marriage, Steven Farley. Ruth Halcomb then studied at the University of California at Los Angeles from 1969 to 1971 and began a career as a freelance writer, public speaker, and editor.

Ruth Halcomb told an interviewer from Contemporary Authors that "most of the writing I have done has been an attempt to elucidate the problems of women-medical, psychological, vocational, and economic." Looking at the body of her published work certainly confirms that statement as an accurate assessment of her career. She has written on child development for Parents' Magazine and on finances for Modern Bride, among numerous other articles and outlets, such as Mademoiselle and Working Woman. She wrote in "True Stories" for 2Young2Retire.com that she has valued "making [her] own hours, choosing [her] own subjects and going on tangents that yielded more personal benefits than actual profits," calling that "the magic part of freelance." During the 1970s she wrote a number of advice-oriented books for women, including Money and the Working Ms in 1974.

While continuing to write, Ruth Halcomb decided to try her hand at being a stockbroker and financial analyst in the 1980s, reasoning that since she had given so much financial advice, she ought to put it into practice. The stock market crash of 1987 ended that particular endeavor and she went back to writing full-time. One of her chief subjects at that time was "retirement." That slowly metamorphosed in to her interest living abroad. As the years passed, she formed an group in Los Angeles that focused on the subject, which grew into more and more groups and business opportunities for Halcomb as speaker and mentor for those desiring to live abroad. In 1998, Halcomb moved to Santa Fe, New Mexico, andfounded a website called "Network for Living Abroad: Linking Expats Past, Present, and Future."