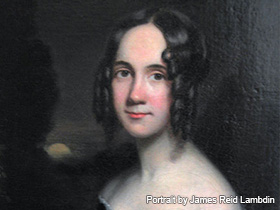 Sarah Josepha Hale, the author of Mary Had a Little Lamb, was a long-time editor of Godey's Lady's Bookin Philadelphia.

Sarah Joseph Hale was born in 1788 in New Hampshire, where she would be forced into the literary world of the early 19th century by her husband's sudden death in 1822. She became a prominent literary figure through her novels and was invited to become editor of the famous journal of the time, Godey's Lady's Book. She edited the Lady's Book until 1877 and did charity work for the rest of her life.

Sarah Josepha Hale was born on October 24, 1788, in a small town near Newport, New Hampshire. Her parents were Gordon Buell, a Revolutionary War captain, and Martha Whittlesay Buell. In 1813, she married a lawyer named David Hale. He died suddenly in 1822, leaving her to raise their five children alone.

Growing up, Hale was well-educated in the classics by her family. Through the teachings of her mother and her brother, both of whom attended Dartmouth College, she informally acquired the equivalent of a college education. She continued her studies with her husband during their marriage. After his death, she turned to writing to support her five children. In 1827, she published Northwood: a Tale of New England (1827), the first novel to be published by an American woman. Shortly after, an Episcopal clergyman, John L. Blake, invited her to edit Ladies' Magazine. In 1837, it was purchased byLouis Godey, and became Godey's Lady's Book. Hale moved to Philadelphia in 1841 and continued to edit the magazine until 1877.

Hale is considered the first of the great "lady editors." She used color illustrations of the latest fashions and original contributions by nearly all of the famous American authors of the day. She raised the circulation of Godey's Lady's Book from 25,000 to 150,000. Through her column, "Editor's Table," Hale articulated personal philosophy, social concerns, and literary criticism. Her editorial policy was to provide quality material to benefit and educate female readers, and as a result, make them better wives and mothers. She devoted much of the magazine to discussing women's role in society. She criticized women public speakers, abolitionists, and women's rights proponents. However, she did campaign for greater educational opportunities for women. She also supported women doctors, property rights for married women, and in her later life, working women. The promotion of women authors was her constant literary goal. Her most famous publication, Woman's Record: or Sketches of All Distinguished Women, from the Creation to A.D. 1854 (1855), was one of the first biographical dictionaries devoted exclusively to women. She spent her life writing many instructional works and editing the writings of others, producing nearly fifty volumes by her death. Her views of "woman's role" and "woman's sphere" are summed up in Manners: or, Happy Homes and Good Society All the Year Round (1868). The famous and well-known rhyme, "Mary Had a Little Lamb," was written by Hale and included in Poems for Our Children (1830).

As a believer in women's moral superiority, Hale expected women to provide spiritual leadership for western civilization and to spread Christianity throughout the world. Thus, she used her position to advance the careers of women missionaries and teachers. In 1851, she founded the Ladies' Medical Missionary Society of Philadelphia. The organization fought for a woman's right to go to a foreign land as a medical missionary without the accompaniment of a man. In 1833, she was elected president of the Seaman's Aid Society, which trained women in trades and set up nursery schools for their children. She was an important advocate for many public campaigns. Some of her accomplishments include raising funds for the Bunker Hill Monument, making Mount Vernon a national shrine, and declaring Thanksgiving a national holiday. She supported and encouraged the work of several generations of women authors. Today, she is considered the most prominent American woman engaged in literary enterprise in the mid-nineteenth century.