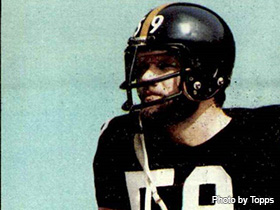 Hall of Fame linebacker Jack Ham played with the Steelers from 1971 to 1982.

Jack Raphael Ham, Jr. was born in Johnstown, Pennsylvania, on December 23, 1948. He attended The Pennsylvania State University where he became one of the school's all time great football players. He then went on to a wildly successful career in the National Football League with the Pittsburgh Steelers. After retiring, he entered broadcasting and headed a drug-testing company. He currently resides in Pittsburgh with his wife, Joanne.

Jack Ham, a man who would leave his mark on the world of American Football, was born in Johnstown, Pennsylvania, on December 23, 1948. The undersized and underrated linebacker graduated Bishop McCort High School in 1967 and found that he had no place to go. Ham, worried that his football career might be finished, then went to Massanutten Military Academy in Woodstock, Virginia, with hopes of toughening up and honing his skills in order to work his way onto a college football team. Just when Ham had thought his only option was to enroll as a student at The Pennsylvania State University and attempt to walk on to the football team, his high school friend Steve Smear convinced recruiter George Welsh to offer Ham a newly opened scholarship. The rest is history. Jack Ham would go on to an astounding career in football, both with The Pennsylvania State University and the NFL's Pittsburgh Steelers. He is now considered to be one of American football's greatest linebackers to ever play the position.

Jack Ham's nickname, "Dobre Shunka," means "good ham" in Polish. His nickname was not just a childhood nickname, but it stayed with him throughout his playing days. In fact, it was the name of a fan club devoted to Ham when he sported the black and gold of the Pittsburgh Steelers. Much like his nickname states, Ham became quite good at playing outside linebacker. A turning point that he himself points to as somewhat of a springboard for his career is the spring of his freshman year of college. After a rough freshman year in a time when freshmen did not see the varsity playing field, Ham found himself on the first string going into spring practice. The confidence that the coaching staff showed throughout the spring off season had a huge impact on Ham, and it began to show the following season. As summed up in Ken Rappoport's book The Pennsylvania State University Nittany Lions, Where Have You Gone?, Jack Ham would go on to letter in football at The Pennsylvania State University from 1968 to 1970. He was a key player in a Nittany Lion squad that would go on a 31-game unbeaten winning streak. In 1970, he was a consensus All-American. However, even throughout his outstanding successes at The Pennsylvania State University, he was still seen by many as an undersized player. Scouting reports in the National Football League said that he was too small to make it in the pros when the Steelers drafted him in the second round of the 1970 NFL draft. Many scouts were saying that Ham's 6'1", 225-pound frame was not big enough to handle the physicality of the professional football league.

For a linebacker, his height was nothing to brag about. Even when he was finally drafted and signed by an NFL team, Ham had trouble making people believe he was qualified for the job. Art Rooney, Jr. almost ran him out of his rookie physical for the Steelers when he "thought [Ham] was the delivery boy." He was even barred from the players entrance at Three Rivers Stadium before his debut game because the security guard at the door did not believe that he played in the NFL. In Ray Didinger's Pittsburgh Steelers, the guard was quoted as saying, "You expect me to believe you're one of the Steelers?" However, when Ham finally reached the gridiron, there was no mistaking that he belonged there.

In his 12 year pro career, spanning from 1971-1982, Ham won four Super Bowls with the Steelers' organization. He was on the All-Pro team nine consecutive years and was a unanimous selection on the NFL's Team of the Decade for the 1970s. In 1975, Ham was named the NFL Defensive Player of the Year. Then, in 1988, Ham's former football coach, Joe Paterno, inducted him into the National Football League Hall of Fame. No more than two years later, Ham was inducted into the College Football Hall of Fame where he became the only The Pennsylvania State University player to be inducted into both halls. There is also a life after football for Jack Ham.

Immediately following his retirement from professional football, Ham decided that it was time to put to use his Business degree that he had earned from The Pennsylvania State University after graduating in 1970. He began selling coal for a company in his native city of Johnstown. He sold the coal to other industries, such as power plants, utilities, and steel companies. Ham also headed Nationwide Drug Testing in Pittsburgh. When being interviewed for the book Penn State Nittany Lions, Where Have You Gone? by Ken Rappoport, Ham had this to say about his endeavors after football: "I still do some of that, but I also have a drug-testing company as well here in Pittsburgh. We implement drug-free workplace programs for companies, from background checks to drug testing to writing policy for companies, so that's my main job out here." Along with his job at Nationwide Drug Testing, Ham is also involved in broadcasting. For years he could be heard on NFL's Games of the Week on Westwood One Radio Network. Ham also won the Penn State Distinguished Alumni Award. No one will forget his accomplishments on the playing field.

His former coach, mentor, and hall of fame inductor Joe Paterno used these words to sum up Jack Ham: "Jack Ham's career is a monument to the work ethic. He was not a highly recruited athlete, but his exceptional intelligence and capacity for hard work made him an extraordinary football player. I don't think any of us knew then what an enormous talent we were getting. Jack Ham will always be the consummate The Pennsylvania State University player." The native of Johnstown, who has also called State College and Western Pennsylvania his home, now resides in the suburbs of Pittsburgh with his wife, Joanne. He still runs a drug testing company. Ham currently he works as radio and sports analyst for the Penn State Sports Network.