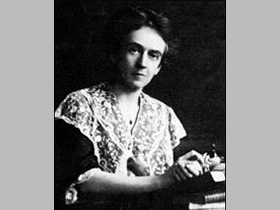 Educator and essayist Edith Hamilton is best-known for her books on Greek and Roman culture.

Born in 1867, Edith Hamilton grew up in Indiana surrounded by literature. She studied Greek and Latin at Bryn Mawr College and in Germany, briefly. She worked as the Headmistress at Bryn Mawr Preparatory School in Baltimore following her studies. After maintaining the position for over twenty years, Hamilton retired and moved to New York City. Hamilton's friends convinced her to publish articles on Greek Theatre in the the magazine Theater Arts Monthly. These articles were immensely popular and led Hamilton to her second career as a writer. Her book, Mythology, along with The Greek Way and The Roman Way, are very popular and respected texts on mythology. She continued to write essays and texts until her death three months before her ninety-sixth birthday in 1963.

Edith Hamilton was born in Germany in 1867 while her mother was on vacation. They returned to the family's home in Fort Wayne, Indiana two months later. The Hamilton family had lived in Fort Wayne for many years; Edith's great-grandfather emigrated from Ireland and bought several acres in what would become Fort Wayne. Eventually Allen Hamilton, Edith's grandfather, her uncle Andrew Holman Hamilton, and her father, Montgomery Hamilton all settled on the Fort Wayne land. Edith's generation of Hamiltons included eleven cousins, so it is not surprising that Edith and her young relatives had little interest in interacting with the outside world; they had plenty of socialization at home.

Edith was particularly close to her sister, Alice, who remembers the young Edith as moody, extreme girl. Edith also was a wonderful storyteller. In the biography, Edith Hamilton, Doris Fielding Reid, Hamilton's longtime friend and companion, writes, "I remember Edith telling stories to some children who listened in breathless silence with their eyes almost popping out of their heads." Edith's sister, Margret, in the same biography, remembers a story Edith told that frightened her so much that she would not go into the closet for fear of hearing a man coming up behind her. Hamilton also loved to read, and was interested in the classics from an early age.

The Hamilton girls were educated at Miss Porter's School for Young Ladies in Connecticut. Edith was there from 1884-86. Edith was not challenged at this "finishing school." She was very ambitious and had a desire to go to college. She and her sister Alice had to teach themselves topics like trigonometry out of a textbook to pass college entrance exams, because these courses were not offered at the school, and the headmistress disapproved of ladies going to college. The Hamilton family objected as well. Nevertheless, Hamilton attended Bryn Mawr College in Pennsylvania, earning a degree in Greek and Latin in 1894, and Alice received her medical degree at the University of Michigan Medical School in 1893.

The only story that remains about Hamilton's time at Bryn Mawr (many of her papers were lost in a flood) concerns smoking on campus. At the time, any student caught smoking would be expelled, and students were expected to enforce this rule by turning their schoolmates in. Hamilton found this last rule to be "beneath contempt" according to Reid's biography. She gave speeches against this regulation, and the entire student body joined her side. The rule was eventually repealed.

The two women continued their studies in Leipzig and in Munich. Hamilton would have continued on to a doctorate there, but her father experienced financial downturn. Luckily, She received an offer in 1896 to teach at the Bryn Mawr Prep School in Baltimore, Md. Reid writes in Edith Hamilton, Edith's reaction to this was very typical. She had never thought of becoming the head of a school and I am sure she had no desire to do so. For that matter she had never visualized any career for herself. But her father had lost all his money and a job was wanted. Here was a job and and regardless of the fact that she knew nothing about teaching, let alone the running of a school. She accepted the challenge. Hamilton was an excellent, exacting teacher. She was also a stellar headmistress. Although there were at least three hundred girls in the school, she gave them their monthly reports individually, on the back stairs (there were no offices). Although she did not often have an opportunity to teach, she enjoyed it immensely. In particular, she occasionally taught the senior Latin class. She retired after an illustrious career in 1922.

After her retirement, she moved to Maine with Doris Fielding Reid; the pair lived together until Hamilton's death. Hamilton adopted Reid's nephew in 1923 and he came to live with the pair. In 1924, the ladies moved to New York City, where they entertained visitors often. Edith often treated her guests with her thoughts on classic literature. They became friends with Rosamund Gilder, who was on the staff of Theatre Arts Monthly. She suggested Hamilton publish some of her thoughts in the form of articles in the magazine. Hamilton maintains that she was pushed and bullied into it, she did eventually agree. Her articles on Greek theatre were a huge success (They were collected in a book, The Ever Present Past) and her career as a writer blossomed. Hamilton was offered a book deal. The Greek Way, on the topic of ancient Greek literature was published in 1930 to great success.

Reid remembers Hamilton writing, sitting in an armchair with any piece of scrap paper that she could find. According to Reid, "The result was something next to illegible."

Regardless, Hamilton produced book after book on the ancient world. She wrote on subjects as diverse as Greek, Roman and Christian history, and also translations of Greek plays. Her most famous work is Mythology (1942), which is a popular collection of Greek mythology (it also includes Roman and Norse myths).

In 1943, Reid and Hamilton moved to Washington, DC. Hamilton gave many radio interviews and lectures on the classics on which she was so knowledgeable. In 1957, she went to Greece for the first time in her life and received an honorary citizenship. She was ninety at the time. She also received several honorary degrees and accolades, including degrees from Yale and the University of Pennsylvania. In 1963, she died peacefully at the age of ninety five.