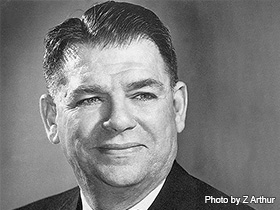 The best-known lyricist and librettist of our time, Hammerstein won a Pulitzer Prize in 1950 for South Pacific, an adaptation of Tales of the South Pacific by fellow Bucks County writer James Michener.

Oscar Hammerstein II was an influential lyricist and librettist in the American Theater who settled down and lived in Doylestown, Pennsylvania, for the later portion of his life. Read more here.

On July 12, 1985, Oscar Hammerstein II was born into a show business family. Residing in New York New York, his father and uncle, Willie and Arthur Hammerstein, were successful theater managers, and his grandfather, Oscar Hammerstein I, was a famous opera impresario. His father was not supportive of his son's desire to participate in the arts, even though it was the business most of his family was involved in. Because of his father's decision, Oscar Hammerstein studied at Columbia University, focusing on pre-law. It was not until his father's death during his second year at school that Hammerstein began writing lyrics. From here, he began writing and performing in many of their varsity shows. He enjoyed this so much that he dropped out of Columbia University to pursue a career in theater as an assistant stage manager with his Uncle Arthur.

In 1917, Hammerstein married a woman named Mary Flynn, with whom he had two children: William and Alice. Not long after the wedding, Hammerstein wrote his first play, The Light. It ran in 1919, but it was stopped after four performances. Hammerstein analyzed what went wrong with his production, and he continued to write plays, lyrics, and librettos to slowly step into the spotlight. His first successful musical was entitled Wildflower; Hammerstein and Otto Harbach wrote the libretto and lyrics and Vincent Youmans composed the music. Beginning in 1923, this simple musical ran over a year because "simple-minded story," according to Stanley Green. Wildflower was an instant success due to the amazing singing, Italian setting, and unique inclusion of operetta..

Following Wildflower, Hammerstein had the opportunity to work with famous composers, such as Jerome Kern, Rudolph Friml, and Irving Berlin. Through collaborations with these composers Hammerstein won fame and popularity for shows like Rose-Marie, Desert Song, and New Moon. Hammerstein and Kern paired up and wrote several successful musicals over the next decade; the most famous was Show Boat. The dramatic content was strong, and the music gave it a deeper meaning. According to PBS, "Show Boat firmly established Oscar's success and reputation as a writer and lyricist." This was the first modern American musical play, and it was accepted instantly by Americans at its world premiere in Washington, D.C. on November 15, 1927. Hammerstein was ecstatic. (Click here to hear a radio essay about Show Boat, part of National Public Radio's series on the 100 most important musical works of the twentieth century. The file requires Real Player to run.)

In 1929, Hammerstein divorced Mary Flynn, his wife of 12 years, and married Dorothy Blanchard Jacobson. Hammerstein spent much of his time in Hollywood trying to contract various studios, but found he did not work well with the time constraints of movie productions.

The last musical he worked on with Kern was Carmen Jones. According to the Rodgers and Hammerstein Organization, this was a "highly-acclaimed 1943 all-black revision of Georges Bizet's tragic opera Carmen." Carmen brought Hammerstein a lot of attention, enhancing his reputation.

Shortly after the libretto for Carmen Jones, another Columbia University alumnus, Richard Rodgers, contacted Hammerstein and asked to collaborate with him on a musical adaptation of Lynn Riggs's book Green Grow the Lilacs. Hammerstein was eager to begin his work with Rodgers. Interestingly, Hammerstein wrote most of the lyrics before Rodgers wrote the score, which is the reverse of how musicals are normally written. Their adaptation was entitled Oklahoma! and released in 1943. Oklahoma! was a unique and beautiful blend of musical comedy and operetta. The musical ran for 2,212 performances in its first Broadway run. This partnership of Rodgers and Hammerstein was born in 1943, and they "became the most successful team in the entire history of the thatre, as well as the most influential." This was evident in 1944 when Oklahoma! received a Pulitzer Prize. (Click here to hear a radio essay about Oklahoma!, part of National Public Radio's series on the 100 most important musical works of the twentieth century. The file requires Real Player to run.)

The duo received many awards for South Pacific when it won the Pulitzer Prize in 1950. South Pacific, The King and I, and The Sound of Music all won Tony awards for best musical. Altogether, Rodgers and Hammerstein earned 35 Tony Awards, 15 Academy Awards, 2 Pulitzer prizes, 2 Emmy Awards, and 2 Grammy Awards. Hammerstein received many personal awards including five honorary degrees. He was also a member of the board of directors for many organizations, including The Dramatists Guild and the Screen Writers' Guild.

According to the John F. Kennedy Center for the Performing Arts, "Hammerstein also served as a mentor to Alan Jay Lerner, and to Stephen Sondheim, who met Hammerstein when he was still very young. Sondheim credits his success with the lyrics to West Side Story to Hammerstein's influence and guidance." He was very influential and provided wisdom and guidance to these men. Hammerstein said, "You gotta have a dream. If you don't have a dream, how you gonna make a dream come true?" He always had a passion for the arts and shared this with all who were interested.

Oscar Hammerstein II died on August 23, 1960, at his home in Doylestown, Pennsylvania, of stomach cancer. Because of his accomplishments and contributions to theater, people mourned worldwide when he passed away. The lights of Times Square in New York City and the West End theatre district in London were dimmed in recognition of his contribution to theater.