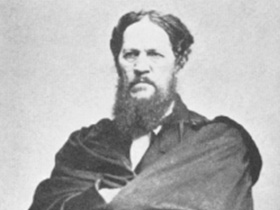 Spy, soldier, adventurer, and Newlin Township native, Josiah Harlan was the inspiration for Rudyard Kipling's The Man Who Would Be King (1888).

Josiah Harlan was born and raised in Chester County, Pennsylvania. A spy, soldier, and adventurer, his 20 years in Afghanistan were the inspiration for Rudyard Kipling's short story "The Man Who Would Be King" (1888). Ben Macintryre's 2004 book, The Man Who Would Be King: The First American in Afghanistan, documents Harlan's life and explores his connection with Kipling's story. Harlan died in October of 1871 in San Francisco, California.

Josiah Harlan was born in the Newlin Township of Chester County, Pennsylvania on June 12, 1799, to Joshua and Sarah Harlan. He was the ninth of ten children. When his mother died, she left a $2,000inheritance to her three daughters. Harlan and his six brothers, however, were expected to build their own fortunes. All the male children had an adventurous streak, and a number of them chose to explore various exotic locations. Harlan's brother Richard was the biggest influence in his life. Richard worked as a doctor in India. He returned to America with tales of his experiences and set up a job for Josiah on a ship to Calcutta. At age 20, Harlan worked at sea for 13 months, using his shore leaves to explore China and India.

After returning to the United States only to have his heart broken by Elizabeth Swain, the sweetheart he had left behind, Harlan returned to India and stayed overseas for almost 20 years. Though not actually trained as a doctor, Harlan worked as a surgeon with the East India Company because it allowed him to live in India. But Harlan's desire for adventure and glory soon pushed him beyond India's borders. After reading Montstuart'sAn Account of the Kingdom of Caubul, and its dependencies in Persia, Tartary, and India, comprising a View of the Afghaun Nation and history of the Dooraunee Monarchy (1815), Harlan made it his goal to achieve the level of glory and riches described in this book. This time in Josiah Harlan's life would later inspire Rudyard Kipling's story The Man Who Would Be King (1888).

Harlan donned various disguises and made numerous pacts on his way to becoming "king." He spent so much time playing these roles that he began to believe his own lies. Harlan followed the path Alexander the Great had taken in Afghanistan, both in travel and in politics. He convinced the people of Kabul that he was a god, and became a prince through an agreement with the region's ruler. Harlan ruled until 1839, resigning after British forces came to Kabul and reinstated an Afghani king.

Ben Macintryre's The Man Who Would Be King: The First American in Afghanistan(2004) is a biography of Josiah Harlan that highlights the connections between Harlan and Daniel Dravot, the "hero" of Kipling's story. Macintyre was covering the war in Afghanistan when he came across references to Harlan, an American who had managed to disguise himself and slip into Kabul. There were clear similarities between Harlan and the main character of The Man Who Would Be King. Macintyre's investigation into Harlan's life eventually led to his discovery of Harlan's 1842 work, A memoir of India and Avghanistaun, with observations on the present exciting and critical state and future prospects of those countries. It was clear to Macintyre that Harlan's story would have been well-known during the time Kipling lived in Afghanistan.

Kipling, born in Bombay, India, supported British imperialism in India and his account of Dravot's rise and fall is one of glory. Dravot followed a path similar to that of Harlan. Dravot is a soldier who uses his knowledge of the signs and practices of Freemasonry to convince the people of a small region of Afghanistan that he is a deity. He trains the Afghanis as soldiers and becomes their king, for a short period of time. Macintyre's words about Harlan are applicable to Dravot as well: He came to Afghanistan "first as a visitor and a spy, then as a courtier...now as a prince, he had absorbed and been absorbed by, the civilization he once disdained."

After 20 years of adventure in India and Afghanistan, Harlan returned to the United States. He married Elizabeth Baker on May 1, 1849, in Chester County. Both Quakers—Harlan had been admitted back into the Friends after a judgment against him for violating the rules of pacifism had been withdrawn—the couple had a daughter, Sarah. In the 1850s, Harlan became a consultant for the US government in their quest to use camels as a military transport method in the deserts of the west. (What resulted from camels being shipped to the cavalry in the West—without connection to Harlan—is depicted in the 1976 comedy, Hawmps!) He tried to use this assignment to create a job for himself, one that would require him to travel to Afghanistan in order to find the animals. This plan did not pan out—camels were imported from North Africa and a Turkish immigrant was used. Harlan made several more attempts to involve the U.S. government in plans that would require his return to Afghanistan—to no avail.

Josiah Harlan spent the remainder of his life looking for ways to enhance his fame, even going so far as to change his entry in the Philadelphia City Directory to make himself the first Harlan listed. He would be delighted to learn of the 1975 movie The Man Who Would Be King (starring Sean Connery and Michael Caine), and that his life inspired Kipling and Macintyre. Harlan died on October 12, 1871, in San Francisco, California.