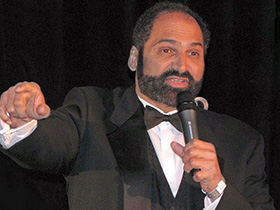 Steelers running back Franco Harris is best known for catching the Immaculate Reception in the 1972 playoffs.

Franco Harris was born on March 7, 1950, in Fort Dix, New Jersey. In 1969, he attended The Pennsylvania State University to play football. In 1972, he was drafted in the first round by the Pittsburgh Steelers. Harris is best known for his "Immaculate Reception," when he caught the winning pass to give Pittsburgh their first playoff win. Throughout his career in the NFL, Harris rushed for 12,120 yards and 91 touchdowns. After 13 seasons, Harris retired in 1985 and was inducted in the Hall of Fame in 1990. Today, Harris owns the businesses Super Bakery Inc. and Parks Sausage Company.

Franco Harris was born on March 7, 1950, in Fort Dix, New Jersey to parents Cad and Gina Harris. Cad Harris was a World War II veteran and then became a supervisor at Walson General Hospital near Fort Dix. Harris's mother, Gina, was a stay-at-home mother who supported Franco and his eight brothers and sisters. Harris attended Rancocas Valley Regional High School in Mount Holly, New Jersey, where he became a High School All-American. In 1969, he went to college at The Pennsylvania State University and majored in Hotel and Restaurant Management. At The Pennsylvania State University, he became a three-year letterman in football as running back. Throughout his three year collegiate career Harris rushed for 2,002 yards and 24 touchdowns. Major games that Harris played included the 1970 Orange Bowl, the 1972 Cotton Bowl, the Senior Bowl, and the College All-Star Game.

In 1972, Harris was drafted in the first-round as the 13th overall selection by the Pittsburgh Steelers. Harris ended up playing 12 of his 13 seasons in the NFL with the Pittsburgh Steelers and would become one of Pittsburgh's most beloved players. In his rookie season as a pro, Harris was an immediate success. He played in 14 games and rushed for 1,055 yards with 13 total touchdowns. Harris was named the league's rookie of the year by both The Sporting News and United Press International. After his first season with Pittsburgh, Harris became extremely popular with Pittsburgh's Italian-American fans. They became "Franco's Italian Army" and wore army helmets with his number on them.

Harris is best known for being involved in one of Pro Football's most famous plays called "The Immaculate Reception." In a 1972 playoff game, the Steelers were trailing the Oakland Raiders 7-6 with 22 seconds left in the game. Pittsburgh's quarterback Terry Bradshaw threw a pass to Steelers receiver John Fuqua, but it was deflected by Oakland's Jack Tatum just as he was tackling Fuqua. As the ball was in the air Harris came out of the back field to catch the ball right before it hit the ground at Oakland's 40-yard line. Harris ran the ball all the way for a touchdown. After the play, the referees were discussing if the play should stand or be called back. Biographer Don Kowet would write: "For a moment, Three Rivers Stadium was absolutely still...then the referee gave the signal, the touchdown was good. Pandemonium took over the stadium. A reporter immediately christened Franco's catch "the Immaculate Reception." Harris's touchdown catch gave the Steelers their first ever playoff win. To this day it is one of the most famous Steelers plays.

Throughout his 13-year career in the NFL, Harris rushed for 12,120 yards and 91 touchdowns. In eight of his 13 seasons he rushed for more than 1,000 yards each year, breaking Jim Brown's record. He was chosen for nine consecutive Pro Bowls from 1972 to 1980 and was an All-Pro player in 1977. He helped lead the Steelers to four Super Bowls between 1974 and 1979. During those four Super Bowls, Harris rushed for 354 yards on 101 carries, both Super Bowl records, and had four touchdowns, which ties him for the second most in Super Bowl history. In 1975, Harris was the first African-American as well as Italian-American to be named Super Bowl MVP. Harris played in Pittsburgh until 1983 and then played his final year with the Seattle Seahawks, but he will always be remembered as a Steeler. Today, the Pittsburgh Steelers no longer retire uniform numbers, but they have never reissued the number 32, and it is generally understood no one will ever wear number 32 in a Steelers jersey again.

In 1985, Franco Harris retired from football, and in 1990 he was inducted into the Professional Football Hall of Fame. Today, Harris is the owner and president of Super Bakery Inc. located in Pittsburgh. Harris purchased and saved the failing Parks Sausage Company, the first publicly held black-owned business in the United States. Harris is also currently a Conti Professor for The Pennsylvania State University's School of Hospitality Management. He lives in Pittsburgh, Pennsylvania.

Franco Harris has not only given Pittsburgh fans numerous memories from the football field; he has also given back and improved the Pittsburgh community through his business and generous contributions.