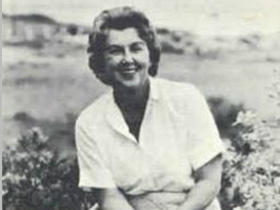 Known as Betty Cavanna, Harrison work for a time in Philadelphia and wrote over 80 books, including her Around the World Today series which included Noko of Japan(1964) and Doug of Australia (1965).

Elizabeth Cavanna Harrison was born on June 24, 1909. She graduated from Douglas College in 1929 and later worked for tenyears as an advertising manager for Westminster Press in Philadelphia, PA. During this time, she and her second husband, George Harrison, lived in Bryn Mawr, Pennsylvania. Harrison began writing novels full-time in 1941, publishing more than 80 novels until her retirement in 1987. Harrison died on August 13, 2001, in Vezelay, France.

Elizabeth Cavanna Harrison was born on June 24, 1909, in Camden, New Jersey, to Walter Cavanna and Emily Allen Cavanna. She grew up in Haddonfield, New Jersey, and as a young girl she was stricken with infantile paralysis. It was during her illness that Harrison developed a love of reading, especially Hans Christian Anderson and Beatrix Potter. She graduated from Douglas College (now a division of Rutgers, The State University of New Jersey, New Brunswick campus) in 1929 with a degree in journalism. Harrison was married and widowed twice. She married her first husband, Edward Headley, in 1940 and he died 12 years later in 1952. She married George Russell Harrison in 1957, and he passed away in 1979. Harrison had one son, Stephan Cavanna Headley, with her first husband.

Harrison began writing during college, submitting articles about college events for the New Brunswick Home News. When she graduated from college, she worked for two years as a reporter and social editor for the Bayonne Times. In 1931, she joined the Westminster Press in Philadelphia as an advertising manager. She stayed at the Press for tenyears, writing short stories in her spare time. In 1941, she quit her job to become a full-time writer. Harrison wrote under several pen names, including Betsy Allen and Elizabeth Headley, although her most well-known pseudonym is Betty Cavanna.

Harrison's novels are written for junior-high girls. In all her books, Harrison always strived to write about "real" characters. Harrison is able to capture the worries and the fears that teenage girls face as they are growing up. Even almost 30 years after she has stopped writing, her themes still apply to young girls today.

Going on Sixteen (1946), which won honors at the Spring Book Festival in 1946, is a coming-of-age story about a young girl named Julie Ferguson. The book begins with Julie's preparations for her upcoming freshman dance. She is nervous, shy around boys, and awkward at making girl friends. Growing up with only her widower father in the house, Julie was never taught the things that other girls learn from their mothers. As Julie progresses painfully through high school, she begins to pick out a niche for herself. She is put in charge of raising a litter of puppies by her father, giving her both responsibility and companionship. The friendship of the dogs is a constant theme throughout the book. Julie also discovers her talent for drawing and art. Slowly, Julie learns to believe in herself, and as her self-confidence grows, everything else falls into place. She becomes one of the most popular girls at school, she is asked out on dates, and her favorite puppy turns into a champion show dog.

Many of the characters and settings in her books were taken from her personal memories and experiences. Before writing The Scarlet Sail (1959), for example, Harrison took sailing lessons. This personal attachment to maintaining a realism in her characters is what made the young women in Harrison's books so relatable to the young women who were reading about them. In the New York Times review of The Scarlet Sail, Alberta Eiseman declares that it is "the warm, sympathetic handling of the heroine herself which will make this book a favorite with young readers."

Jenny Kimura (1964), one of the stories inspired by Harrison's travels abroad, tells the story about a Japanese-American girl who makes her first trip to America to visit a grandmother she has never met. When Jenny arrives, she is astonished by the space around her and the attitudes of the people. Her grandmother is kind, but not very loving. All the people in the Kansas town where her grandmother lives are enchanted with Jenny, and she quickly makes friends with several of the local teenagers. It isn't long before Jenny is distracted by the attentions of a cute boy, whose family doesn't want him dating a Japanese-American girl. As the summer progresses, Jenny Kimura must learn how to find a balance between the strict customs she has been taught all her life in Japan and the new experiences she is having in America.

One of the genres that Harrison excelled at was mystery writing. She received several awards for her mysteries, including a citation from New Jersey Institute of Technology and the English Teachers Association of New Jersey in 1966 for Mystery at Love's Creek (1965). This story of romance, the wild Australian outback, and a bank robbery is described in the New York Times as "a narration ideal for young readers."

During the course of her writing career, between 1941 and 1987, Harrison wrote more than 80 novels. She spent the last two years of her life living in France, and died on August 13, 2001, in Vezelay, France.