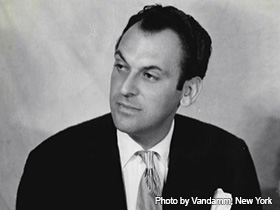 You Can't Take it With You (1936), the 1937 Pulitzer Prize winner for Drama, was one of many collaborations between George Kaufman and Hart.

Born in New York, New York, on October 24, 1904, Moss Hart was a playwright most famous for his work with George S. Kaufman. The plays they produced were Broadway staples during the 1930s and early 1940s; You Can't Take It With You (1936) won the 1937 Pulitzer Prize in Drama. Both Hart and Kaufman owned farms in Bucks County, Pennsylvania, where they retreated to write. Hart also found success as a solo playwright, screenwriter, and director, before passing away in Palm Springs, California, on December 20, 1961.

Moss Hart was born on October 24, 1904, in a tenement on 105th street in New York, New York, to Barnett Hart and Lillie Solomon Hart. He married actress Kitty Carlisle on August 10, 1946, with whom he had two children, Christopher and Cathy.

Hart began his career as a playwright in 1924, working under traveling producer Gus Pitou. Hart's first comedy, The Hold-up Man, which was re-titled The Beloved Bandit, was a flop, costing Pitou roughly $45,000 and Hart his job. Despite this early failure, Hart continued to write plays for several years, though he did not obtain commercial success. He worked as an actor and director until 1929, when one of his plays, Once in a Lifetime (1930), caught the attention of Broadway producer Sam H. Harris, who paired Hart up withGeorge S. Kaufman.

Hart's literary legacy includes the collection of plays he wrote in collaboration with Kaufman. Once in a Lifetime was a great success, earning praise from critics during its two-year, 300-performance stint on Broadway. Their next play, Merrily We Roll Along (1934), was also successful, but it paled in comparison to You Can't Take It With You (1936), which won the 1937 Pulitzer Prize in drama and ran for over 800 shows on Broadway. Their future collaboration received mixed reviews: I'd Rather Be Right (1937), which satirized President Roosevelt's New Deal, andThe Man Who Came to Dinner(1939) both were well-received by audiences and critics alike. However, The Fabulous Invalid and The American Way were not well-received. Their final full-length collaboration was the unsuccessful George Washington Slept Here (1940), a comedy set in Bucks County, Pennsylvania, and a staple of summer theatre programs everywhere. Though they remained good friends, after 1940 the pair no longer collaborated in a professional capacity.

Throughout their years of collaboration, Bucks County became a sanctuary for Hart and Kaufman. Hart retreated to Fairview Farm—an 87-acre estate in Aquetong—which was just down the road from Kaufman's Barley Sheaf Farm in Holicong. While isolated and serene, these farms were not too far from New Hope, where the arts thrived during this period. The pair found Kaufman's residence, which earned the nickname Cherchez La Farm, to be a suitable place to work, without the noise and distractions of the city. Also, the Bucks County Playhouse proved to be a good creative outlet for the duo. The theater ran "amateur" productions of Kaufman-Hart plays such as The Man Who Came to Dinner and George Washington Slept Here, and it often had the duo act or direct. They were occasionally accompanied by Harpo Marx or other famous actors who frequented the New Hope area. There is a Kaufman-Hart room in the James A. Michener Art Museum in Doylestown, where the writers' connection to Bucks County is commemorated.

After his split with Kaufman in 1940, Hart broadened his professional horizons. He continued to write plays with moderate success—Lady in the Dark(1941) was well-received by critics and had a good run on Broadway. He also delved into screenwriting. He had tried his hand at the craft in the early 1930s with some moderate success—Broadway Melody of 1936 (1935)had earned him an Academy Award nomination. However, he had not written a full screenplay since then. The bulk of his screenplays were adaptations of his stage plays, both Kaufman-Hartcollaborations and solo efforts. He earned Writer's Guild nominations for Hans Christian Andersen(1952)and for A Star is Born (1954). Beyond his career as a writer, Hart also had success as a director. He won a Tony Award for his direction of My Fair Lady in 1956. His production, which featured Julie Andrews and Rex Harrison in the lead roles, ran for several years on Broadway and in London.

Hart spent his later years living with his wife and children in Palm Springs, California, where he wrote his autobiography, Act One. He died on December 20, 1961, at the age of 57.