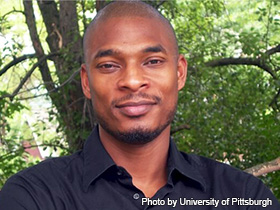 Terrance Hayes is a multi-award-winning poet and author of Hip Logic and Muscular Music, among other collections.

Award-winning poet Terrance Hayes has served on the faculty at the University of Pittsburgh as an English Professor and was featured in the 2006 Public Poetry Project of the Pennsylvania Center for the Book. Read more here.

Terrance Hayes was born in Columbia, South Carolina, on November 18, 1971. Raised by his parents, James and Ethel (Seabrook) Hayes, Terrance became a well-rounded athlete and scholar. In high school, Hayes was an accomplished athlete as well as a creative writer and artist. His accomplishments on and off the basketball court paved the way for his acceptance into college, and Hayes eventually earned a scholarship to Coker College.

Hayes' athletic and academic achievements in college earned him Academic All-American distinction. During his senior year, one of Hayes's professors turned his attention to poetry, and Hayes knew he wanted to write poetry for the rest of his life. Majoring in English with a minor in Fine Arts, Hayes received his BA at Coker College in 1994.

In 1996, Hayes participated as volunteer staff in the inaugural retreat of the Cave Canem Foundation (a foundation dedicated to fostering the professional growth of African American poets). It was there he later met poet Yona Harvey in 2007, when she attended the retreat as a Cave Canem Fellow. The two married soon after meeting and moved to Japan for a year, where Harvey taught in an exchange program.

On returning to the States, Hayes pursued his MFA in Poetry at the University of Pittsburgh. After earning his degree, he became an assistant professor of English at the Xavier University of New Orleans from 1999 to 2001. Hayes became more concerned with African American culture and decided to write poetry that explored the culture itself rather than how it is defined by American society. His first book of poetry, Muscular Music, was published in 1999. Included imagery references how dominant, white popular culture can impact African American identity. His poem "What I Am" in an example:

I'm standing in the express lane (cash only)
about to buy Head and Shoulders
the white people shampoo, no one knows
what I am.

Hayes also used cultural icons such as Shaft, Fat Albert, and Miles Davis within Muscular Music to address societal issues and show what it means to be an artist and a black man in American culture. According to Black Issues Book Review critics Duriel E. Harris and Kelly Ellis, Muscular Music is "an original, provocative read" showing the "melodies of a thoughtfully evolving male self." Other critics agreed, and Hayes' first book of poetry won the Whiting Writers Award in 1999 and the Kate Tufts Discovery Award in 2000.

Hayes went on to confront racism, sexism, religion, family structure, and stereotypes in his 2002 book Hip Logic. The book cover even features one of Hayes' oil paintings. Within the book, his skill with imagery is evident, as demonstrated in the poem, "Gun/Woman/Son." Here, Hayes describes the 1952 shooting of a mother as she holds her son and the escape of the shooter that follows. Powerful poems such as this paved the way for Hip Logic to become the 2001 National Poetry Series winner, a finalist for the Los Angeles Times Book Award, and runner-up for the James Laughlin Award from the Academy of American Poets.

"Gun/Woman/Son," from Hip Logic, was also selected for publication by the Public Poetry Project of the Pennyslvania Center for the Book in 2006.

His third book of poems, Wind in a Box, earned Hayes a National Endowment for the Arts fellowship, a Pushcart Prize, and a 2005 Best American Poetry selection for works featured within it. Wind in a Box was also named one of the Best 100 Books of 2006 by Publisher's Weekly.

According to the National Book Foundation, Hayes' collection Lighthead (2010) is a book of poems that "investigates how we construct experience. With one foot firmly grounded in the everyday and the other hovering in the air, his poems braid dream and reality into a poetry that is both dark and buoyant." Lighthead won the 2010 National Book Award for Poetry and was referred to as "a bold movement forward in the development of an important voice in American Poetry," by Weave Magazine's Andrew Mulvania.

In 2011, Pilot Books published Hayes' Who are the Tribes, a limited edition letterpress bound in a double pamphlet hand-stitch and illustrated by Hayes himself. The work encompasses a single, experimental poem in 15 parts that Kyle Minor of HTML Giant describes as "wild, formally and otherwise."

Cornelius Eady, award-winning poet and co-founder of Cave Canem, further explains the significance of Hayes' poetry: First you'll marvel at his skill, his near-perfect pitch, his disarming humor, his brilliant turns of phrase. Then you'll notice the grace, the tenderness, the unblinking truth-telling just beneath his lines, the open and generous way he takes in our world.

At age 42, Hayes was selected as a MacArthur Foundation Fellow in 2014. Later that year, he was listed among the [Sexiest] Men at Work by People Magazine. His 2015 collection, How to Be Drawn, was named a 2015 National Book Award Finalist and received the2016 National Association for the Advancement of Colored People (NAACP) Image Award forPoetry. In early 2015, he also began collaborating with poets Dawn Lundy Martin and his wife Yona to launch the Center for African American Poetry and Poetics (CAAPP) - a creative think tank to spark conversation and collaboration among poets and other artists, and to promote and archive the work of African American poets for future generations, according to Tara Jayakar of Poets & Writers.

Terrance Hayes is the 2011 USA Zell Fellow for Literature, and has received numerous honors and awards, including two Pushcart Prizes, four Best American Poetry selections, a Whiting Writers' Award, and fellowships from the National Endowment for the Arts Fellowship and the Guggenheim Foundation (2009). He has read and conducted workshops in prisons, high schools, and at various colleges and universities throughout the country, and continues to teach for the Cave Canem Foundation.

Hayes lives with his wife, Yona, and two children, Ua and Aaron, in Pittsburgh, Pennsylvania, where he taught for twelve years at Carnegie Mellon University before joining the faculty of the University of Pittsburgh as a full professor of English in the fall of 2013.