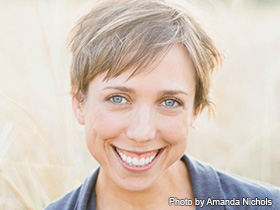 K. A. Hays is the author of the 2009 poetry collection Dear Apocalypse.

Poet K. A. Hays was born in Phoenixville, Pennsylvania. She earned a Bachelor of Arts (BA) in English from Bucknell University in 2003 and a Masters of Fine Arts (MFA) from Brown University in 2005. Hays' work has been published in a variety of journals and her first book, Dear Apocalypse, was published in 2009. She has also been included in the Best American Poetry 2009. In 2008-2010, Hays was awarded a Stadler Emerging Writer Fellowship at Bucknell University, where she served as an Associate Editor of the university's literary journal, West Branch, for a time and where she continues to teach at the time of this writing. Early Creatures, Native Gods (2012) and Windthrow (2017) are among her other collections.

Hays has published work in a variety of journals and magazines, including short stories. Her short fiction piece, "Bean People," published in 2004 in CutBank, is described by Sima Rabinowitz in a NewsPages.com Literary Magazine Review as "An odd but marvelous story. [...] This story's tactics, the use of lists and charts and family trees might appear as a gimmick in less capable hands, but here they are clever and successful." Hays has also published short fiction and verse translations in Hudson Review, Cimarron Review, and others.

Many of her poems have appeared in esteemed journals such as The Southern Review (2006), The Missouri Review (2007), and the Best American Poetry 2009 collection. The majority of Hays' poetry is centered on nature; she explains: "I often begin a poem, formal or otherwise, with an aspect of the natural landscape that I've been observing. As I work to render the natural landscape, the poem also begins to meditate on human struggle—whether with faith and doubt, with violence and arrogance, with mortality, or with the loneliness of individual perception."

In a Missouri Review interview, she further describes her creative process: "I try to trust that a poem's music and movement and, ultimately, meaning, germinate in the darker, more intuitive part of the mind, and not through my well-intentioned planning. My better poems grow out of that trust."

In January of 2009, Carnegie Mellon University Press published Katie Hays' first book of poetry. The collection, Dear Apocalypse, includes many of her published works, a few previously unpublished pieces, and the title poem. "Outside the Basilica di San Petronio," included in the collection, is an example of the Hays' ability to portray nature with beauty and realism. It depicts a young girl who experiences a spiritual awakening while observing a flock of pigeons in the courtyard of the Basilica di San Petronio.

Her poem, "That Death," from Dear Apocalypse was selected for publication by the Public Poetry Project of the Pennsylvania Center for the Book in 2009.

Of her collection, Early Creatures, Native Gods (2012), Rick Joines says in the American Literary Review that "These poems reveal a serious poet grappling with serious things, like faith and doubt." He goes on to say that "[Hays'] themes are important and universal, her phrasing is often sententious, her diction is pure, simple, and as austere as her imagination, and she accurately apprehends experience and conveys it as precisely as possible in free verse."

Hays has been a poet-in-residence at the former Elizabeth Bishop House in Great Village, Nova Scotia, and at the Robert Frost Place in Franconia, New Hampshire, according to her Bucknell faculty page. Her third book Windthrow (2017) is [f]illed with wind, sea, forest, and bees, says writer and Lock Haven University professor Marjorie Maddox in her WPSU BookMark review. [T]he poems move between light and shadow, negotiating happiness and grief. ... They will cry at your locks and rap at your windows.

In 2007-2010, Hays was a Stadler Emerging Writer Fellow at Bucknell University, during which she served as an Associate Editor for the university's literary journal, West Branch. At the time of this writing, she lives in Lewisburg, Pennsylvania, and has continued to teach at the university since her fellowship, while also directing the Bucknell Seminar for Undergraduate Poets and serving as the Acting Director of the Stradler Center for Poetry.

"To teach poetry," she tells her former student and current Stradler Center Intern, Conner Small, in an interview for Bucknell, "is in part, to teach some of our most vital and basic skills: communication, innovation, and empathy. [...] I'm happy to be back here now, contributing to those other communities—the intellectual and artistic communities—that nourish so many talented current Bucknell students, and that stay with them long after they go."