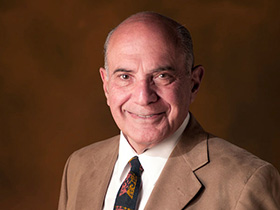 Samuel John Hazo was born on July 19, 1928, in Pittsburgh, Pennsylvania, to Sam and Lottie (Abdou) Hazo, Lebanese and Assyrian immigrants. When Hazo was just a young boy, his mother died, and his aunt became the primary caretaker of him and his brother, Robert. Hazo attributes much of his curiosity about writing to his aunt, who made education a top priority for him and his brother.

During his service, Hazo took a closer look at his previously written poems and began molding them into masterpieces. Hazo wrote his poems about the world as he saw it. Writing quickly became a way of therapy for him; he put his thoughts and emotions into his poems. In an interview with Dr. David Sokolowski in 1988, Hazo defines the writing of poetry as, "a time when suddenly things come into focus, and you work under the imperative of some impulse, something you did not will into being, that came to you, and you must work it out in words that are just now coming to you, that are making you put everything that you have at that moment right on the line."

After leaving the Marine Corps, Hazo returned to his hometown of Pittsburgh to continue his education. In 1955, Hazo earned his MA from Duquesne University, and two years later he earned his PhD from the University of Pittsburgh. After earning his PhD, Hazo returned to teach at Duquesne as a Professor of English from 1955 to the present. Hazo married the love of his life, Mary Anne, and together they had one son, Samuel R. Hazo Jr., who was born in 1966 and would later become a renowned composer.

Hazo has authored many books of poetry, as well as several plays, and pieces published in literary magazines, and anthologies. He has also been a commentator and narrator on National Public Radio, KDKA, based in Pittsburgh. Hazo has received over ten honorary degrees. He was appointed the first state Poet Laureate for Commonwealth of Pennsylvania by Governor Robert Casey in 1993, and he held this position until 2003. Regarding his position as the first state poet of Pennsylvania, Hazo stated, "My view of the role of a state poet is that he or she should strive to make poetry an expected and readily accepted part of public discourse.”

In 1986, Hazo received the Hazlett Memorial Award for Excellence in the Arts. In 1995, he was awarded the Pittsburgh Center for the Arts Cultural Award. He has also been honored with the Griffin Award for Creative Writing from the University of Notre Dame, as well as the Elizabeth Kray Award for Outstanding Service to Poetry from New York University.

Though Hazo’s primary form is poetry, he has also dabbled in playwriting and fiction. He often writes about themes that have relevance to his life. Some of the themes he focuses on include family, Christianity, war, suffering, absurdity of life, and the mystery of death. His work reflects a strong association to the importance of observation and wonder.

Samuel Hazo served as the Founder and Director of the International Poetry Forum in Pittsburgh, which sought to demonstrate poetry's relevance and centrality to the public before its closure in 2009. He is also the McAnulty Distinguished Professor Emeritus of English at Duquesne University, where he taught for over 40 years. In his quest for greater awareness of the beauty of poetry, Hazo convinced the Pittsburgh Post-Gazette to publish a poem each week in its Saturday edition.

At the time of this writing, Hazo lives in Pittsburgh, Pennsylvania.