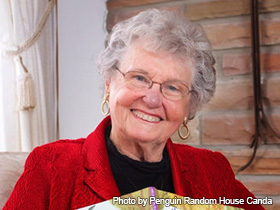 Children's author Florence Parry Heide was born and raised in Pittsburgh, Pennsylvania. She spent summers in her mother's hometown of Punxsutawney. After completing her education at the Ellis School, she attended Wilson College and then the University of California at Los Angeles, earning an English degree. She wrote over 100 books, both independently and in collaboration with Sylvia van Clief and her children. On October 24, 2011, Heide died at the age of 92.

Florence Parry Heide was born in Pittsburgh, Pennsylvania, on February 27, 1919. Her father was David W. Parry, a banker, and her mother was Florence Fisher, a columnist and actress. In 1943, she married Captain Donald C. Heide, a lawyer, with whom she had five children: Christen, Roxanne, Judith, David, and Parry. Florence Parry Heide has also published under the pseudonyms Alex B. Allen and Jamie McDonald.

Florence Parry was educated at the Ellis School in Pittsburgh's Shadyside neighborhood before attending Wilson College in Chambersburg, Pennsylvania. Two years later, she transferred to the University of California at Los Angeles in 1939, where she earned her BA in English. After graduation, Heide moved to New York City with hopes of finding a job. In the years prior to World War II, she worked at Radio-Keith-Orpheum in New York, as well as at various advertising and public relations agencies. She later returned to her hometown and worked as the public relations director of the Pittsburgh Playhouse.

Children's stories, mysteries, poetry, and lyrics are all represented in Heide's bibliography, though she did not start writing until all five of her children were in school. Heide has been praised for her whimsical sense of humor and her keen insight into the lives of children. While her lighthearted children's stories have garnered her the most renown and critical acclaim, Heide is also known for her ability to accurately portray the emotions of young girls facing the difficult transition into adolescence in such books as When the Sad One Comes to Stay (1975), Growing Anyway Up (1975), and Secret Dreamer, Secret Dreams (1978). Heide co-wrote many of her books with Sylvia van Clief and continued co-authoring books with her own daughter, Roxanne, after van Clief died in the early seventies. She also co-wrote books with her brother David Fisher Parry, as well as another daughter, Judith, and her son David.

Heide has received numerous awards for many of her works. Her most critically acclaimed work was The Shrinking of Treehorn (1971), named by the New York Times as the Best Illustrated Children's Book of 1971 and winner of the Jugendbuchpreis for the Best Children's Book of Germany six years later. The Day of Ahmed's Secret (1990) received the Editors' Choice Award from Booklist in 1991, a prize also awarded to Sami and the Time of the Troubles in 1992. Other honors for her books include several Notable Book citations from the American Library Association and Best Book citations from The School Library Journal. She was awarded an honorary doctorate of literature by Carthage College in Wisconsin in 1979.

On October 24, 2011, Florence Parry Heide passed away in her sleep at her home in Kenosha, Wisconsin. She was 92.