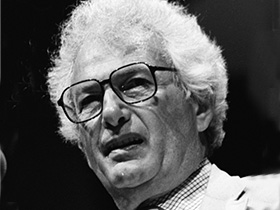 Heller began his career at Penn State as an English Instructor. He later went on to write his most famous work, the World War II satire Catch-22.

Novelist Joseph Heller was a lecturer in English at The Pennsylvania State University in the early 1950s, while he formulated his first ideas for his famous Catch-22 (1971). Read more here.

The son of Isaac and Lena Heller, Russian-Jewish immigrants, Joseph Heller was born on May 1, 1923, in Brooklyn, New York. His upbringing was mostly secular, as his mother was more concerned with social forms than with religious observances. When he was only five, his father died after an unsuccessful operation. Some critics have speculated that this early experience with mortality led to Heller's use of death as a major theme in his work. With his father gone, Heller, his mother, and his two half-siblings from his father's first marriage were left to fend for themselves in the carnival-like atmosphere of Coney Island. The environment in which he grew up is credited as a major source of the wry humor and irony that was his literary trademark.

After his father's death, Heller's half-brother Lee, 14 years his elder, became like a surrogate father to him. Meanwhile, Lena Heller continued to support the family as best she could, by taking in boarders. When he was ten years old, Heller was given a child's version of Homer's Iliad by a cousin; after reading it he announced that if he ever grew up, he wanted to be a writer.

He tried his hand at writing short stories while holding down various part-time jobs in his teenage years. Heller graduated as an honors student from Abraham Lincoln High School in 1941, worked briefly in an insurance office, and then in 1942 enlisted in the Army Air Corps, which sent him to Corsica two years later. While in the Mediterranean theatre, he flew 60 combat missions and was awarded an Air Medal and a Presidential Unit Citation. While Heller's most famous novel, Catch-22, is about a World War II pilot, it is generally recognized that Heller's own war experience was very different than that portrayed in his novel.

After his discharge from the army in 1945, he married Shirley Held, with whom he would have two children, Erica Jill and Theodore Michael. Heller then went back to school under the G.I. Bill, earning a B.A. in English from New York University, a M.A. from Columbia, and then attending Oxford for a year on a Fulbright Scholarship. Heller was then employed as a lecturer in English at what was then Pennsylvania State College, during which time he began to formulate ideas for Catch-22. He took several character names for that novel from people he knew at Penn State; for instance, "Major Major Major" came from John Major, an English professor, and "Chaplain Tapman" was based on Allen Tapman, an intercollegiate boxing champ. In both cases, Heller found something ironic about the names that attracted him and incorporated them into his work.

In addition to teaching composition classes while at Penn State, Heller also wrote several short stories, later published in the collection Catch as Catch Can. However, the pastoral setting of State College did not provide enough conflict to inspire Heller's writing, and he and his wife missed the hustle and bustle of New York, so they decided to return to the city. There, from 1952 to 1961, Heller worked as an advertising copywriter, and his experiences at this job gave him material for a later novel, Something Happened.

Catch-22 was published in 1961, and it immediately assured Heller a place in literary history. Heller's protagonist, a WWII pilot, recognizes that only an insane person would want to fly any more missions. However, when he tells his superiors this, they say that the fact that he wants to be grounded proves his sanity, so must keep flying. The popularity of Heller's novel led to the use of "catch-22" in common conversation to describe any impossible bureaucratic dilemma. Today, Catch-22 is recognized as a parable of the absurdity of war, one that foreshadowed the anti-war protests during the Vietnam era. Indeed, in later interviews, Heller was very vocal about his disapproval of American intervention in Vietnam and about government Cold War propaganda.

After the great success of his first novel, Heller quit his job in advertising and focused exclusively on his fiction. In addition to adapting Catch-22 for the stage, he wrote half a dozen more novels and worked on screenplays. Hollywood had been soliciting Heller's help with writing screenplays since his days at Penn State, but when he finally agreed to try screen writing, he was left sadly disillusioned with the process; so disillusioned, in fact, that he waived the rights to work of the screenplay for the film adaptation of Catch-22.

Not until 13 years after the publication of Catch-22 did he publish another novel. Something Happened, published in 1974, is a story of alienation in the American business world whose protagonist is a careerist with no real friends. Heller's third novel, Good as Gold, draws on his Jewish heritage and tells the tale of an idealistic Jewish professor of English who winds up in politics. However, while Heller was achieving professional success, his marriage was failing, and in 1984 he and his wife divorced.

In 1986, while still coping with his divorce, he became ill with Guillain-Barr?? syndrome, a nervous system disease that left him paralyzed for several months. Though he was sometimes too weak even to breathe on his own, Heller eventually recovered with the help of his friend Speed Vogel, who assisted him during his illness. Heller and Vogel turned the experience into a book, No Laughing Matter, which details the story of Heller's illness in chapters written alternately by the two friends.

In 1987, Heller remarried, wedding Valerie Humphries, a nurse who had tended him during his illness. He revisited the characters from Catch-22 in a 1994 sequel, Closing Time. Heller continued to write until his death in 1999 of a heart attack at home in East Hampton, New York. His friend and fellow novelist Kurt Vonnegut described his death as a "calamity for American letters." Heller's last novel, Portrait of an Artist, As an Old Man, was published posthumously.