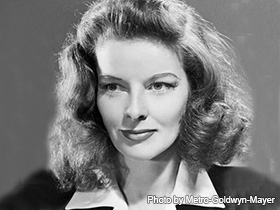 Katharine Houghton Hepburn was born in Hartford, Connecticut, on May 12, 1907. She attended Bryn Mawr College and graduated in 1928, where she discovered she wanted to be an actress. Hepburn went on to become one of a well-known actress. She won four Academy Awards, and is also an Emmy Award winner and Tony Award nominee. She shared the screen with Spencer Tracy in many films and the two were also close off screen, but never married. She also wrote two memoirs when she was in her 80s. On June 29, 2003, Katharine Hepburn died of natural causes in her home in Old Saybrook, Connecticut.

Born on May 12, 1907, in Hartford, Connecticut, Katharine Houghton Hepburn was welcomed by her loving parents Katherine and Thomas Hepburn. Growing up Katherine was one of five siblings: Tom, Dick, Bob, Marion, and Peg. As a child, she was close to her brother Tom, and was seen as an athletic tomboy. In 1921, when Hepburn was only 14-years-old, she found her brother Tom hanged in what is thought to be an accident. He had been practicing a hanging trick that their father had taught them. This was extremely traumatic experience for Hepburn that disturbed her for years. The years following the accident she was reserved with girls her own age and had to receive home schooling. She even celebrated Tom's birthday, November 8, as her own.

Hepburn went on to attend Bryn Mawr College, where she majored in history and philosophy. While attending Bryn Mawr, she decided she wanted to become an actress. While enrolled there she took part in many of their productions. Her most notable performance was as Pandora in John Lyly's The Woman in the Moone. Also while there she met future husband, Ludlow Ogden Smith. The pair married in 1928, but eventually divorced in 1934.

After graduating from Bryn Mawr, she moved to New York and began her quest to become an actress. She landed a few small roles on Broadway before landing her first big debut in 1932, when she appeared in A Warrior's Husband. This launched her into screen tests, which landed her a role in A Bill of Divorcement that same year opposite John Barrymore. She portrays an insane man's daughter, and after he escapes the institution, she is left to take care of him. Hepburn received excellent reviews and went on to make more films from 1932 to 1934. The third film was Morning Glory in 1933, which earned her an Academy Award. Hepburn plays a small town actress who moves to New York dreaming of stardom. Little Women was her next movie; it was one of the most successful films during its time. Hepburn plays Josephine March, and won Best Actress at the Venice Film Festival. In the 1930s, Hepburn also was romantically involved with Howard Hughes, a very wealthy businessman. At age 19, he inherited the Hughes Tool Company. He went on to become a Hollywood movie producer for RKO Pictures, where he met Hepburn. Hughes was a very busy man; he not only was a movie producer, but also was known as an aircraft inventor and a mining mogul. Hepburn and Hughes never married; the 2004 movie Aviator was based on their relationship.

Along with Hepburn's success, came arrogance. Word began to spread that Hepburn was difficult backstage. She did not wear makeup, often wore slacks, and never posed for pictures. She then returned to Broadway, where she starred in The Lake, which Hepburn got horrible reviews. After she returned to Hollywood, she only had two hits in the next few years. In 1935, she starred in Alice Adams, earning her second Oscar nomination. In the film, Hepburn plays Alice Adams, the daughter of a modest family and dreams of being accepted by higher society. However, after Alice Adams, Hepburn had a string of flops and was labeled as "box office poison," because of her movie failures.

Hepburn then went back to Broadway where she starred in The Philadelphia Story, which was a major success. Hepburn enjoyed the play so much, that she bought the film rights and returned to Hollywood to make her own movie with her choice of director and co-stars. The big screen version of The Philadelphia Story was a smash, and Hepburn was back in the business with her third Oscar nomination. The film depicts Hepburn as Tracy Lord, a wealthy socialite from the Main Line in Philadelphia. She divorces husband C.K. Dexter Haven (Cary Grant) and plans to marry newly rich George Kittredge until all the wedding plans go crazy; Jimmy Stewart won the Oscar for his role as a wealthy journalist reporting on the wedding details.

In 1942, she starred in Woman of the Year with Spencer Tracy in which the two play a couple who try to keep the romance alive in their marriage. Bosley Crowther of The New York Times said, "The acting of Miss Hepburn and Mr. Tracy are all as crisp and cracking as a brand new $1,000 bill." It earned Hepburn an Oscar nomination, but she did not win that year. The two became box office gold and went on to star in eight more movies together. The romance between them lasted for the next 25 years both on and off screen; however, the two never married because Spencer was married to Louise Treadwell. Since Tracy was Catholic, he never divorced his wife, Treadwell. As a result, Hepburn and Tracy hid their relationship from the public. The most notable films that Tracy and Hepburn starred in together were Adam's Rib in 1949, Pat and Mike in 1952, and Desk Set in 1957.

In 1951, Hepburn starred in one of her most recognized films, The African Queen, starring opposite Humphrey Bogart. In The African Queen,Hepburn plays a spinster missionary in colonial Africa during World War I. She is forced to flee her mission after Germany wipes out the village she is working in. Bogart's character is a Canadian supplier and he offers to take her down the river to civilization on a little steamer called The African Queen. The two have contrasting personalities and Hepburn wants to continue down the river and attack the German cruiser. The movie earned fantastic reviews and both actors were acknowledged for their roles. This marked the move from younger characters to middle-aged roles, and Hepburn earned her fifth Oscar nomination, but she lost to Vivien Leigh. In the 1950s, Hepburn earned six more Academy Award nominations and was busy in the movie business.

In the 1960s, she withdrew from the movie business and began to spend more time with Tracy. In 1967, the pair starred in Guess Who's Coming To Dinner. Tracy and Hepburn played uptight upper class parents whose daughter comes home married to an African American man. It was the duo's last film together, and Spencer Tracy's last film ever; he died a few weeks after the movie was finished. However, Hepburn did earn her second Oscar, for Best Actress, for the film. The following year, Hepburn starred in The Lion In Winter, in which she won her third Academy Award. A review by the American Film Institute (AFI) said, "The performances by Peter O'Toole and Katharine Hepburn are the best of their careers." Hepburn played Eleanor of Aquitaine and O'Toole played King Henry II. The movie is about their rocky marriage and three sons, and who is left to become the next King. O'Toole was also nominated for an Academy Award and the movie was nominated for Best Picture in 1968.

On Broadway, Hepburn performed in many Shakespearean roles and even performed as Coco Chanel in the musical Coco in 1969. Hepburn was nervous about her singing voice, but this did not seem to be a problem, since the enjoyed a long run on Broadway. Hepburn was nominated for a Tony Award in 1970 for Best Actress in a Musical.

In the 1970s, Hepburn turned away from the big screen and Broadway. She began to make many made-for-TV films. Her most popular one was, Love Among the Ruins in which she co-starred with Laurence Oliver in 1975. Hepburn portrays an aging dame of the London Theater, Jessica Medlicott. Medlicott is accused of seducing a young man and she hires the greatest lawyer in Britain who has been in love with her for years. The TV movie earned Hepburn an Emmy Award.

In 1971, Katherine Hepburn received the high honor of being awarded the Screen Actor's Guild Lifetime Achievement Award. In 1981, Hepburn was cast in the movie On Golden Pond, opposite Henry Fonda. They play an old couple who summer on a lake and get a visit from their estranged daughter and her stepson. Hepburn earned her fourth Academy Award for her work in this film. Hepburn's record four Academy Awards and 12 nominations is a record that is only broken by Meryl Streep with 13 nominations. No other actor has ever earned as many Oscars as Hepburn did. It is not question that Hepburn was a talented actress, she was once quoted saying, "I'm a personality as well as an actress, Show me an actress who isn't a personality and you'll show me a woman who isn't a star."

Hepburn did not stop there. In 1988 she wrote, The Making of the African Queen, which discussed the antics that went on during the making of the film, The African Queen. In 1991 she became a bestselling author with her memoir titled, Me: Stories of My Life. It was in this memoir that she released her birthday was May 12, not November 8, which was her brother Tom's. Also in 1991, the AFI named Hepburn as the number one woman in film over the last 50 years. Her last film was a brief appearance in Love Affair in 1994, which was a remake of An Affair to Remember.

Hepburn retired from the movie industry because of her declining health and after that remained mostly as home. She kept active by biking and swimming near her ocean house in Old Saybrook, Connecticut. At the age of 96, surrounded by her family and loved ones she passed away on June 29, 2003. Although she is gone, Hepburn's legacy still lives on. She will even be remembered by some as the First Lady of Cinema.

On September 8, 2006, Hepburn's alma mater, Bryn Mawr College, opened the Katharine Houghton Hepburn Center in honor of Hepburn and her mother. The main focus of the center is to help women lead appealing lives and to get involved with important issues affecting women today. In the summer of 2008 in Hepburn's hometown of Old Saybrook, Connecticut, the Katharine Hepburn Cultural Arts Center and Theatre opened, their mission is to promote cultural arts for current and future generation for the people of the area. Hepburn also has a star on the Hollywood Walk of Fame; it is located at 6284 Hollywood Boulevard in between Argyle Avenue and Vine Street.