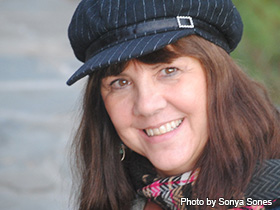 Writer of Under New York(2001) and A Humble Life(2001) for young adults, Linda Oatman High was born in Ephrata.

Linda Oatman High was born on April 28, 1958, in Ephrata, Pennsylvania. Her big break in writing came in 1993, when she earned a scholarship to the Highlights Foundations Writers Workshops at Chautauqua. She has produced over twenty books for children taking place in the Lancaster area.

Linda Oatman High was born on April 28, 1958, in Ephrata, Pennsylvania, the daughter of miner and bus driver Robert and office worker Mary Myrna Millard Haas. She had a brother named Randy, as well as numerous pets. High attended the one-room California School in Lancaster before attending Caernarvon Elementary School. She held various jobs as a waitress, lifeguard, and secretary. She married recycler John High. Linda and John High had four children together: stepson J. D. High, Justin Oatman, stepdaughter Kala High, and Zachary High. She wrote articles for magazines, such as Highlights for Children, Hopscotch, and Children's Digest, before she began composing children's books. In 1993, Linda High won the John Crane Memorial Scholarship to the Highlights Foundation Writers Workshops at Chautauqua in Honesdale, Pennsylvania. After gaining much-needed writing experience, High received a grant from the Society of Children's Book Writers and Illustrators since 1994. High's first book,Maize, was first written in 1990 and published in 1995.

Barn Savers (1999) concerns the story of a father and son who disassemble pieces of historical barns before they can be totally destroyed. Kenneth J. Weiss of Language Arts argues that this is "a wonderful piece of nonfiction...a rare book, that shows images of rural life that go beyond the usual farmyard." Miriam Lang Budin of the School Library Journal claims readers "get the idea that the American country-side is littered with old barns destined for total destruction if they are not recycled or renovated." However, what High "does not make palpable is the individuality, history, or inherent aesthetic value of the structures and the materials of which they are made." Carolyn Phelan of The Booklist shares her comments: "Shining through both text and illustrations is respect for the beauty and integrity of the old barn, respect for the father's work of salvaging its parts for new uses, and the mutual respect of father and son, who share in a job worth doing."

Beekeepers (1999) follows a young girl and her grandfather who attend to bees, eventually quelling a swarm of them after overcoming their fears. Evelyn Butrico of School Library Journal finds Beekeerpers to be a "beautifully descriptive story" that is "simple." Additionally, "the illustrations glow, leaving readers with a warm feeling of a shared experience." Stephanie Zvirin of The Booklist writes, "The rich, golden color of honey saturates the illustrations in this quiet...At the heart of the story is the child's personal triumph, sweet as honey." Daine Rowback of Publishers Weekly says, "Readers will be buzzing with curiosity after turning the pages of this quietly suspenseful story," and High's "spare, poetic descriptions make it easy to imagine a dewy spring morning on the farm."

Under New York (2001) illustratively portrays the underbelly of the city, both above and below the street in side-by-side comparisons, accompanied with rhythmic text. Janice M. Del Negro of Bulletin of the Center for Children's Books claims the book "is neither touristy nor obvious...The author packs the book with the concrete details that children find compelling, and her words, colored with childlike enthusiasm, depict the city as a place worth exploring. The free verse is rhythmic and enthralling, with strong imagery that imbues it with a certain urban intensity." Diane Rowback of Publishers Weekly views the "irresistibly quirky, good-natured tour of the subterranean goings-on in Gotham...High's breezy narrative does not target specific locations, yet does include marvelous details...A whimsical way to savor a bite of the Big Apple."

Sister Slam and the Poetic Motormouth Roadtrip (2004), also written in poetic verse, tells the coming-of-age story of Laura, a teenager who runs away with her friend to a poetry contest in New Jersey and experiences many tribulations along the way. Deborah Stevenson of Bulletin of the Center for Children's Books sees High's book very positively:

"[It is] a fairy tale, with fortunes good and bad raining from the skies and characters iconic rather than psychologically round, despite the earthbound events. High's pulsating rap balladry makes it a vigorous and stylish outing, however. Her close-coupled lines interweave double and triple rhymes both internally and terminally, pounding to be read aloud, and the division of the story into wittily titled 'lessons'...makes sequential performance more possible and tempting."

Diane Rowback of Publishers Weekly describes Sister Slam as an "ultra-hip Cinderella tale," wherein High "creates events and people bigger than life, yet readers will find some very genuine emotions hidden beneath Laura's loud, cynical front. Her transformation from outcast to superstar, lyrically captured through snappy rhymes, is satisfying as well as hilarious."

Linda Oatman High's awards include: for Barn Savers, a Notable Book in the Language Arts citation from the National Council of Teachers of English; for Under New York, a Blue Ribbon Book citation from the Bulletin of the Center for Children's Books, a best book citation in Nick Jr. magazine, and Best Books of the Year citation in Parenting magazine; for A Humble Life (2002), the Great Lakes Book Award, the Lee Bennett Hopkins Poetry Honor Book, and Notable Social Studies Book for Young People from the National Council for the Social Studies/Children's Book Council.

High is a member of Pennwriters and the Society of Children's Book Writers and Illustrators. In addition to being a writer of children's books, High served as a news reporter, a feature writer, and a contributor to the weekly column "Jake's View" syndicated in various local newspapers. She states her approach to writing: "My dream has come true, with a bit of faith, a dash of determination, and lots of hard work. In Hound Heaven, Silver Nickles never gives up. She has faith and determination, and she works hard toward her goal. I try to instill all my fictional characters with these very real attributes...they can make dreams come true! In giving advice to aspiring writers, I would quote Ben Franklin: 'Never, ever, ever, ever, ever give up.'"

In 2010, she graduated from Vermont College with anMFA in Writing for Children and Young Adults.

In 2011, High spoke to students at an elementary school in Providence, New Jersey, on Read Across America day, encouraging them to read and write. High passionately engaged students, asking them, "Does anybody here have a brother or a sister who annoys them? Don't fight 'em, write 'em. Put them in your stories and make them do what you want. You're the boss of them when you put them in your stories." She also told them they writing was "not just about the happy stuff," a lesson she learned when her parents got a divorce. Her final words of wisdom and advice included telling the children to "write from your life, read a lot, write a lot, practice" and to "never give up on your dreams."

Since then, she's published a number of YA novels, includingOtherwise(2014),A Heart Like Ringo Starr(2015), and One Amazing Elephant (2017).

At the time of this writing, shelives in Pennsylvania and continues to write and speak at various enagagements.