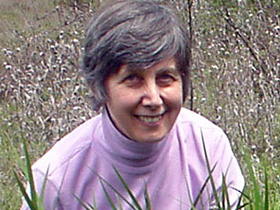 Children's author and illustrator Anna Grossnickle Hines was born in Ohio in 1946. In early life she aspired to be a children’s book illustrator, and she later fulfilled her ambitions as an author-illustrator of the genre. Most of her life has been spent in California, writing books that teach children about kindness, friendship, and appreciating nature, among other topics. Hines and her husband moved to Milford, Pennsylvania in 1990, during which time she wrote prolifically.

Anna Grossnickle was born on July 13, 1946, in Cincinnati, the eldest of seven children of Earl Stanton and Ruth Marie (Putnam) Grossnickle. She was a shy child, but already aspired to become an author. The Grossnickles lived in Ohio for the first eleven years of Anna's life before moving to Los Angeles. During her studies at San Fernando Valley State College (now California State University at Northridge), Grossnickle was discouraged from writing children’s books and “wasting” her talent. She married Steve Carlton in 1965 as a student, and together they had two daughters: Bethany and Sarah. The Carltons divorced in 1973, and Anna married her current husband, Gary Hines, in 1976. They welcomed a third daughter, Lassen. The family moved to Milton, PA, in 1990 following a job opportunity for her husband, and then returned to California in 2001.

After graduating from Northridge, Anna G. Hines embarked on a career in teaching. For several years in the late 1960s, she taught preschool before receiving her Elementary Education Credential at Pacific Oaks College in 1974. She later left formal education pursuits to turn to her original life's goal: illustrating and writing children's books, despite the discouragement she had received from college professors about likelihood of success in the industry.

That advice was disproved with the sale of her first picture book, Taste the Raindrops, in 1983. At the time of this writing, Hines has written and illustrated over 70 books, and has encouraged both her husband and her daughter Sarah to begin writing books for children. Her book When We Married Gary (1996) tells the story of her second marriage and the creation of her new family.

Not only has Hines been very productive, but she has earned the esteem of educators and children's book experts alike. Both Daddy Makes the Best Spaghetti (1986) and Grandma Gets Grumpy (1988) were given Children's Choice Awards by the International Reading Association and Children's Book Council. The National Science Teachers Association and the National Council for the Social Studies have each recognized the quality of Hines' books Remember the Butterflies (1991) and Flying Firefighters (1993) respectively. The Pennsylvania Library Association's Carolyn W. Field Award went to her 1995 What Joe Saw.

The Pennsylvania Center for the Book awarded honored Hines for her children’s book I Am a Backhoe (2010) in the 2011 Baker’s Dozen, as well as the 2002 Lee Bennett Hopkins Poetry Award for her work Pieces: A Year in Poems and Quilts (2001).

As of this writing, Anna Hines and husband Gary live in Gualala, CA, where they both continue to write.