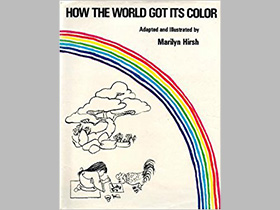 Marilyn Hirsh, best-known for writing children's books, maintained an emphasis on teaching Judaism and its cultural practices to a young audience.

Marilyn Hirsh, a children's author and illustrator, incorporated her Peace Corps experience in India and her Jewish heritage into much of her work, written and visual. Her interests in art and history also surfaced at the Indian art courses she taught at two New York colleges. In 1988, she died of cancer at the young age of 44.

Marilyn Hirsh was born to parents Eugene and Rose Hirsh on January 1, 1944, in Chicago, Illinois. Attending Carnegie Mellon University in Pittsburgh, Hirsh completed her undergraduate studies with a Bachelor of Fine Arts degree. In the same year of her graduation, 1965, she left for Nasik, India, as a member of the Peace Corps. Hirsh taught English and art, and she also worked as a writer and illustrator for the Children's Book Trust in New Delhi.

Hirsh's two years in the Peace Corps ended in 1967, and she returned to the United States. Pursuing further education, she enrolled at New York University and received a Master's degree in 1974. Specializing in Indian and Buddhist art history, she remained in the city to teach at New York University's Institute of Fine Arts and the Cooper Union School for the Advancement of Science and Art. She married James H. Harris, but the couple did not have any children.

Hirsh continued to write and illustrate children's books, exploring both the Indian culture she had experienced in the Peace Corps and her own Jewish heritage. In 1978, she received both the Asian Cultural Center UNESCO prize and the Noma Concours Award for children's picture book illustrations for The Elephants and the Mice. The next year, she won the Sydney Taylor Body-Of-Work Award, and in 1986 Joseph Who Loved The Sabbath earned the Sydney Taylor Children's Book Award. She garnered several other awards for her writing and illustrating before her death in October 1988.