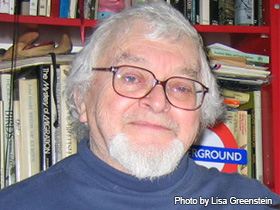 The author of the beloved Frances books for children as well as the science-fiction classic Riddley Walker (1980), Hoban was born in Lansdale in 1925.

Russell Hoban, born in Landsdale in 1925, was a children's fantasy/science-fiction author renowned both in the United Kingdom and the United States. Several of his books were made into plays or motion pictures, most notably Riddley Walker (1980), The Mouse and His Child (1967), and Turtle Diary (1975). On occasion, Hoban described his books as intended for everyone‚ not strictly children‚ as they at times explore deep themes that only older audiences might appreciate.

Russell Conwell Hoban was born on February 4, 1925, in Lansdale, Pennsylvania, the youngest and only boy of three. His parents, Abram T. Hoban and Jeanette Dimmerman, were Jewish-Ukrainian immigrants. They named Hoban after Russell Conwell, the founder and first president of Temple University—a legendary figure in Philadelphia history. Hoban was exposed early to writing and the arts: His father was the advertising manager of the Jewish Daily Forward newspaper and the director of a Philadelphia drama guild. He died when Hoban was only 11, however, forcing Hoban's mother to go to work as a store owner.

Hoban began to draw from the age of five. He also began writing stories and poems, many of which won awards. His sister Tana, who later became a world-renowned illustrator and photographer, influenced Hoban in his work. Hoban continued to write through his youth, but writing as a livelihood would have to wait until his 20s—Hoban enlisted in the Army at age 18, serving as a radio operator in the Philippines and Italy during World War II. His service in the Army lasted through one year of his marriage, and his bravery in the Italian campaign later earned him a Bronze Star.

Hoban obtained formal training in the arts from the Philadelphia Museum School of Industrial Art (now the College of Art and Design at the University of the Arts) from 1941 to 1943. He had attended Temple University for five weeks only to drop out. Hoban had also enrolled in the tuition-free Graphic Sketch Club (now the Samuel S. Fleisher Art Memorial) of Philadelphia, where he met his wife, Lillian Aberman. The two seemed ideal for each other: Lillian had wanted to illustrate children's books since her youth.

In 1944, the 19-year-olds married and moved to New York City. Lillian gave up illustration to become a dance instructor, though in the early 1960s she would again illustrate for her husband. Hoban worked at everything from magazine illustration to advertising copywriting. Not until 1967, and with the Frances series of children's books written, did Hoban fully immerse himself in a full-time writing career that is still healthy today. The Frances series was illustrated entirely by Lillian Hoban and chronicled the adventures of a badger, Frances, as he learned simple lessons like giving or trying new foods.

The Hobans had four children: Phoebe, Abrom, Esmé, and Julia. The family set out for London in 1969, intending to stay two years. Plans went awry, however, when Lillian divorced and returned to the United States with the children—while Hoban never left. Lillian had illustrated half of Hoban's fifty children's books. Together they had won high honors, including a 1964 Library of Congress Children's Book selection for Bread and Jam for Frances (1964), and the Lewis Carroll Shelf Award and Christopher Award, both in 1972, for Emmet Otter's Jug-band Christmas (1971). The divorce, naturally, marked the end of their collaboration. Lillian still continued to write and illustrate children's books on her own.

Hoban's divorce changed him: He began to write more books for adults. In 1970, Hoban met a bookseller named Gundula Ahl. They married in 1975 and had three children: Jachin (Jake), Ben, and Wieland. Hoban often subtly referenced his children (from both marriages) in his works.

Hoban went on to win several more awards. A Near Thing for Captain Najork (1975) was selected by the New York Times as one of the Best Illustrated Children's Books of 1976. How Tom Beat Captain Najork and His Hired Sportsmen (1974) won the Whitbread Literary Award in 1974 and made the International Board on Books for Young People Honor List in 1976. In the humorous Najork books, the main character, a boy named Tom, won't quit playing around. To punish him, his mean aunt sends for Captain Najork and his hired sportsmen to teach Tom a lesson. Tom turns the tables, however, beating Najork and his sportsmen at their own games: womble, muck and sneedball. In A Near Thing, Najork returns only to be beaten again. Riddley Walker (1980), the story of a young boy in a post-apocalyptic future where a degraded form of English is spoken, won numerous awards and favor from critics.

Hoban published with Bloomsbury until the end of his life. In addition to his lastworks, Bloomsbury released new trade paperback editions of Hoban's older novels. His last novels, My Tango with Barbara Strozzi (2007) and Angelica Lost and Found (2010), were published in 2007 and 2010, respectively. Hoban's books are more readily available in the United Kingdom than in the United States. His following is also larger "across the pond," and includes fan sites, fan clubs, and conventions. In a 2002 interview with The Guardian, Hoban noted, " I think death will be a good career move for me, he laughs. People will say, 'yes, Hoban, he seems an interesting writer, let's look at him again'. Hoban resided in London with his wife until his death on December 13, 2011 at the age of 86.