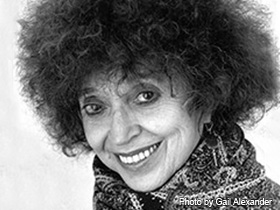 A writer and photographer, Tana Hoban was a native Philadelphian known for her concept books like Shapes and Things (1970).

Born on February 20, 1917, in Philadelphia, Tana Hoban took up drawing and aspired to become an illustrator before discovering photography at the School of Design for Women. After doing freelance work for numerous publications as an advertising photographer, Hoban published a series of "concept books" for children. Her style, hailed as a revolutionary concept, uses pictures of everyday objects and little text in helping young readers understand basic symbols in the world around them. Tana Hoban passed away in Paris in 2006.

Tana Hoban was born on February 20, 1917, in Philadelphia. She was the daughter of Abraham T. Hoban, an advertising manager for the Jewish Daily Forward, and Jeanette (Dimmerman) Hoban, both Russian immigrants. Along with her brother and future writer Russell and sister Freeda, the family moved into the Logan neighborhood before settling in Lansdale, Pennsylvania. There, Hoban attended then Upper Gwynedd Public School and the Lansdale High School. During this time, she also studied art and drawing as a girl, attending classes at the Philadelphia School of Industrial Art on weekends. Her father enrolled her at the Moore College of Art (formerly the School of Design for Women). Before graduating in 1938, Hoban explored photography by taking a course in her last semester. That year, she received the John Frederick Lewis Fellowship to travel and study painting in England and the Netherlands, shortly before the Second World War.

Upon her return, she married photographer Edward E. Gallob in 1939, one of her father's former actors for the Drama Guild of Philadelphia that he founded. With a camera given to her by her husband, Hoban started taking pictures for her mother's shop window. The couple had a child together—Miela. Hoban briefly worked as a freelance graphic artist and illustrator before beginning a photography career. In 1946, Hoban and Gallob opened up a studio in West Philadelphia, where Hoban gradually moved away from illustrating for magazines, e.g. The Saturday Evening Post, Field and Stream, and Country Gentleman, and putting greater effort in photography. She flourished as an advertising photographer, especially in taking pictures of children. She told Something About the Author Autobiography Series that children "were less self-conscious than adults...I wanted natural, spontaneous responses," preferring to photograph them having fun in the park and playground instead of modeling them. These photographs appeared on the covers of 16 different magazines throughout the 1940s, including Life, Look, and McCall's.

After serving as instructor of photography at the University of Pennsylvania (1966-1969), Hoban published her first children's book, Shapes and Things, in 1970. Tana Hoban also toured as a visiting lecturer at a number of schools in the country from 1974 to 1984, even leading a children's photography workshop in Avioriaz, France, in 1984. In this time, she and Edward Gallob moved to New York in 1975, where she divorced her husband in 1982. She then married journalist and former picture editor John G. Morris in 1983. They moved to Paris that year, settling in the Marais district, where Hoban continued photographing Parisian and European scenes and continued producing books until 2000's Cubes, Cones, Cylinders and Spheres.

Her many photographic works have been shown at numerous exhibitions throughout her career: alongside Margaret Bourke-White, Esther Bubley, Dorothea Lange, and Helen Levitt (1949); the "Family of Man" exhibition curated by famed photographer Edward Steichen at the Museum of Modern Art in New York City (1955); the White House Conference on Children and Youth in Washington, DC, (1960); "What Is Man?" at the Museum of the Philadelphia Civic Center (1966); the Neikrug Gallery (1980) and Photographs Unlimited in New York City (1982); and at the Galerie Agathe in Gaillard, Paris (1984-1985). Hoban received numerous awards, such as a lifetime achievement award from then American Society of Media Photographers (1998) and the Children's Literature Citation from Drexel University and the Free Library of Philadelphia (1983).

A photography project for children at the Bank Street School, Philadelphia, had inspired her to author more than 50 children's works, which have sold more than two million copies. Hoban composed her "concept books" usually with little or no text, incorporating photographs of objects from everyday life, sometimes with cutout pages exposing only a portion of a photograph. Readers would then guess what was portrayed before turning the page and seeing the full picture. She received much praise for these photographic concept books for children, oriented towards young audiences under five years old. This particular style of photography reflects a child's viewpoint in looking at the world, and is also a method of exploring perspective has appealed to adults. These photograph books help children, who understand objects by sight and name, to identify, explore, and comprehend their world in exploring themes such as geometry, counting, machines, animals, textures, colors, and other fundamental characteristics and symbols that children learn about their surroundings.

Publishers Weekly acclaimed Hoban's first work Shapes and Things (1970): "Here is a series of photographs that does 'open one's eyes to the understated beauty of pure shape.' To the unexpected beauty of form—of design, of familiar things...The world of shapes and things will never look the same again, thanks to Tana Hoban." Reviewing her last work, Cubes, Cones, Cylinders and Spheres (2000), Kirkus Reviews praised Hoban in making mathematical concepts accessible to children when she "creates photographs that show the geometric shapes of the world around us. Everything looks spontaneous, yet her meticulously composed images make the four mathematical shapes that are her subject clear and interesting." Commenting on Hoban's general style, Joanna Rudge Long of Five Owls wrote that "Even the most casual reader is struck by the eye-catching appeal of these books; but closer examination reveals the extraordinary intelligence and attention to detail that make Hoban an artist without equal in the form she has pioneered and made her own. Each book offers a wealth of concepts and visual ideas; it's Hoban's particular genius that their interaction is playful, rather than didactic, awaiting discovery in the reader's own good time."

In a 1979 autobiographical essay, reported the Washington Post, Tana Hoban said that most of her books "come from such perceptions of daily surroundings, organized so as to give the child a sense of verbal relationships, or concepts...I try in my books to catch a fleeting moment and an emotion in a way that touches children and makes them want to respond...Through my photographs and through open eyes I try to say, 'Look!' There are shapes here and everywhere, things to count, colors to see and always, surprises." When interviewed by Alida Allison, Hoban described her books as "points of departure to encourage and provoke thought and conversation. They can tell a story, in any language. Most of my books you can use in more than one way. I try to make them so they're not passive, so you're not just looking at the pages. You have to think and maybe come up with something else. A lot of times there are other things to observe or discover that are not apparent at first...They're really books of perception, calling to the attention of the child."

After a series of strokes and other illnesses, Tana Hoban, age 88, passed away at a hospice in Louveciennes, Paris (France), on January 27, 2006.