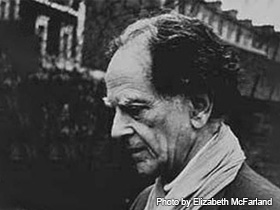 In 1973 and 1974, Philadelphia poet and critic Daniel Hoffman was appointed Consultant in Poetry to the Library of Congress, a position known today as Poet Laureate.

Daniel Hoffman launched his lucrative literary career from the city of Philadelphia. Once holding the position that is now known as the Poet Laureate, Hoffman has been regarded by some as one of the most skilled poets ever produced by the United States. His epic poem about the founder of Pennsylvania, William Penn, glorifies the forgotten founding father, giving life to a man most take for granted. His criticism of Edgar Allan Poe injects vivacity into Poe's cold exterior. Lauded for his uncanny consistency and crafty word choice, Hoffman was the recipient of dozens of awards. On March 30, 2013, he died in Haverford, Pennsylvania, at the age of 89.

In the article "Words to Create A World," critic John Holmes states of Daniel Gerard Hoffman, "Hoffman always knows what he is doing, and what he is looking at." It is this gift that has landed Daniel Hoffman such wide acclaim in the literary community and a more than fifty-year career of relative adherence to the poetic finesse that W. H. Auden witnessed in Hoffman's youth. Hoffman was a master of semantics, crafting with personal fervor and constancy. He pays homage to his benefactors, such as Auden and Edgar Allan Poe, but makes sure to never fall into the traps of poetic fads. "A poet's obligation is to write as well as he can, according to his own deeply-held convictions, regardless of the movements and fads of the moment." Hoffman states in "An Interview with Daniel Hoffman by J. F. Pirro." Hoffman continues, "Poetry should not be presented as a code to be deciphered or a puzzle to be cracked. The love of poetry has to start with the pleasure principle." To Hoffman, poetry must come from a personal satisfaction. Throughout his career, Hoffman has received numerous awards and has been asked to speak to crowds of esteemed individuals as an authority of his craft. He was also well established and highly regarded for his works in literary criticism. Though he has never acquired the fame of some of his contemporaries, his literary accomplishments have been highly regarded and impactful in the literary world.

Hoffman was born in New York City on April 3, 1923. He led a relatively normal childhood. He recalled spending time in school practicing for the debate team, running cross-country for his high school's track and field team and occasionally focusing on his love-hate relationship with the works of Edgar Allan Poe. He vividly recalls, in his work Poe Poe Poe Poe Poe Poe Poe (1972), a bizarre nightmare he had of being slowly decapitated by the minute hand of a giant clock at his high school, which, he claims, was brought about by Poe's work "The Predicament."

At the age of twenty, Hoffman joined the US Air force, serving between the years 1943 and 1946. Upon returning, he was accepted into Columbia University and began to focus on his own creative writing. At this time the content of his writings mainly focused upon our human relationship with nature. He received his masters and doctoral degrees at Columbia University, and it was not long until his writings caught the eye of the literary crowd. In 1951, he won the "Poetry Center Introductions Prize" for several of his early poems.

One member of the literary crowd who was interested in the writings of young Hoffman was W. H. Auden, an established poet. In 1956, Auden helped to start Hoffman's career by writing a foreword to vol. 51 of the Yale Series of Younger Poets: titled An Armada of Thirty Whales, Hoffman's first book of poetry. In the foreword, Auden asks himself if nature poetry is making a comeback through the works of young poets such as Hoffman.

Auden and other critics had realized that Hoffman's An Armada of Thirty Whales (1956) symbolized a changing relationship between humans and nature. In the article "Speaking of Books," critic Donald Adams states, "it is difficult, if not impossible, for the poet of today to approach Nature with the same mental attitudes which Wordsworth held." Hoffman's work affirmed this statement with most of the literary community in his collection. Auden states that Hoffman's work was chosen for the Yale Series of Younger Poets because it was the only entry that held significant optimism. In fact, Hoffman included humor in his poetry, something that wasn't present in most other contemporary poetry.

In his first work, Hoffman displays an effort to revive nature poetry using vivid imagery and, according to Keith Walters of the University of South Carolina in his biography of Daniel Hoffman, a "mixture of irony and seriousness." In one of the collection's poems, "That the Pear Delights Me Now," Hoffman examines the relationship between poet and nature, concluding that nature is formed upon functionality and the poet is only concerned with aesthetics; therefore, the two can truly never work harmoniously.

In "Beauties of the Garden," critic John Ciardi exclaims, "Hoffman has language, perception passion and intellect. If he can learn to wear his poetic attitudes more naturally, fine things should be possible from him." Ciardi was right in his assessment of An Armada of Thirty Whales; it proved be the launch pad of a prominent career for Hoffman.

Hoffman followed up with two more collections of poetry, A Little Geste and Other Poems (1960) and The City of Satisfactions (1963). These collections were well received by critics, who touted Hoffman has a master of style and word choice. In "Words to Create a World," critic John Holmes remarks upon Hoffman's "skillful changes of form, retelling the Robin Hood and Maid Marian story as 'a passionate conflict between instinctual life and the claims of order.'" Hoffman continued to construct his poetry using nature, and began to incorporate myth and urban culture into his poems. For example, poems in his third collection The City of Satisfactions (1963) delve into duality between nature and the ethereal. He presents his opposition to the urban lifestyle and its disconnect to all things earthly and heavenly. Despite the serious nature of his poems, Hoffman never abandons his characteristic wit and humor.

By the mid-sixties, Hoffman was well praised by his poetic peers and within the overall literary community. He had won numerous awards such as the Ainsly Prize (1957), the Literary Award of the Athenaeum of Philadelphia (1963), the Medal For Excellence at Columbia University (1964), the National Institute of Arts and Letters Award (1967), and the Phi Beta Kappa Poet Award (1963, 1964, 1966, 1973).

He had been living in the city of Philadelphia since 1948 and had married respected editor of the Ladies Home Journal and poet, Elizabeth McFarland, with whom he had two children. He was teaching as a Professor of English at the University of Pennsylvania, and continued to release collections of poetry. It was at this time that Hoffman took the role of literary critic and produced what many consider the greatest work of Edgar Allan Poe criticism ever written, Poe Poe Poe Poe Poe Poe Poe.

Titling the work in homage to Poe's "The Bells," Hoffman examines the work of his favorite childhood author, Edgar Allan Poe. In the article "MS. Found in a Poe Bug," Christopher Lehmann-Haupt insists that Hoffman's criticism of Poe differs from all previous works of Poe criticism, "Mr. Hoffman has chosen to write it in unorthodox fashion, as a sort of autobiography of criticism." Hoffman chooses to incorporate various other critical analyses of Poe within the work, including those of Henry James and T. S. Elliot. Hoffman either refutes or supports these criticisms and puts forth great effort to ensure the reader that Poe was entirely in control of his writing prowess.

"Reading and re-reading Poe, I found myself wishing to do justice to the actual experience of reading Poe, of reading him again and again over half a lifetime [...] I really began to read Poe when just emerging from childhood. That was the time of life when one couldn't help but surrender to the insistent clangor of a rhythm, the gong-like resonances of rhyme." Hoffman insisted in Poe Poe Poe Poe Poe Poe Poe. "It is the imagination we are endeavoring to understand."

Hoffman interestingly inserted himself into the work at curious times, giving some insight to his own relationship with Poe. He recounted the aforementioned dream in which he is decapitated by a large minute hand. He also recalled, ironically, etching the words "I hate Poe" into his first volume of Poe short stories. It should also be mentioned that at the time of Poe Poe Poe Poe Poe Poe Poe's publication, Hoffman wore a hairstyle that made him look strikingly like Poe.

At this point in Hoffman's career he had released five collections of poetry (An Armada of Thirty Whales, A Little Geste and Other Poems, The City of Satisfactions, Striking the Stones [1968], and Broken Laws [1970]), all of which were critically acclaimed. He also had been the author of Poe Poe Poe Poe Poe Poe Poe and several other works of criticism.

In the years 1973 and 1974 he was appointed Consultant in Poetry to the Library of Congress, a position known today as Poet Laureate. During his time in office, Hoffman became frustrated with corruptions he was seeing in the United States' government. Hoffman was always interested in the concept of the epic hero, and he wished to find such a figure in United States history. He found such a hero perched above City Hall, looking over his city of Philadelphia: William Penn. "It was during the Vietnam War and the civil rights movement, during the years of imperial presidency and the arrogance of Watergate, when the ideals of American democracy were at once under attack and being strongly affirmed, that Penn stood before me as an undiscovered Founding Father. His treaty with the Indians loomed as a symbolic action embodying fight relations among races, religions, and nations." Hoffman stated in his essay "The Exactions of Clio."

Thus Brotherly Love (1981), Hoffman's magnum opus, was conceived. Most critics agree that it was Hoffman's greatest contribution to American literature, considered by many to be the most successful attempt at creating an American Epic. Hoffman spent 16 years compiling research and picking his own imagination to create the collection of sixty-one intertwining poems that draw directly from the diary of William Penn. Where history is lost, Hoffman takes steps to fill in blanks. In the article "Four Poets," critic Paul Breslin states of Daniel Hoffman, "the poet has taken us where the scholar cannot go."

From poem 38 of Hoffman's Brotherly Love:

As William Penn am I In this life till I die. In this life, what is real, The body, or the soul? My father whom I love Is not my Father above;?ö (1-6)

Hoffman remarks in "The Exactions of Clio," "Having lived in or near Philadelphia since 1948, I became aware of Penn's legacies as part of the air we breathe. The residual effects of his idealism seemed to have shaped the democracy we know. His ideas conditioned the best features of American life."

Hoffman spent the next several years as a professor of English at the University of Pennsylvania and at Swarthmore College. He achieved seniority in both institutions, and frequently contributed by reciting his poetry at large gatherings and special events. He continued to release compilations of his poetry, often mixing the work from his youth with his newer material. Critics have noted that Hoffman was gifted with consistency; while most poets' content dwindles as the writer ages, Hoffman's poems remained as vivacious as ever.

During retirement, Hoffman served as Poet in Residence at the University of Pennsylvania, saw Brotherly Love be musically adapted by composer Ezra Laderman, and assisted in the publication of several of his wife's unreleased poems, which he had discovered shortly after her passing in 2005. Daniel Hoffman died on March 30, 2013, in Haverford, Pennsylvania, at the age of 89.