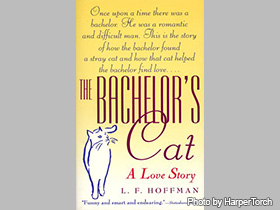 Novelist Lynn Hoffman was bornin Brooklyn, New York in 1944. After a life of varied culinary, writing, and teaching experiences, he settled in Philadelphia, Pennsylvania. He published several works, including The Bachelor's Cat (1997), bang BANG (2007), Radiation Days: The Rollicking, Lighthearted Story of a Man and His Cancer (2014), and a number of informational books on food, wine, and beer. Hoffman passed away on June 24, 2018. He was 73.

Novelist Lynn Hoffman was born in Brooklyn, New York, on December 18, 1944. His parents, Mary Monahan Hoffman and Emanuel Hoffman, provided him with a multicultural background. His father was Jewish and his mother was an Irish Catholic who converted to Judaism. As a child, reading was always a refuge for Hoffman, so much so that his mother often told him to "get your nose out of that book." While he has become a prolific writer in recent years, he got his start at age nine, when he had a four-line poem published in his camp's newspaper. Among later influences, Hoffman names Milan Kundera, Vladimir Nabokov, Jack Kerouac, and Haruki Murakami.

After graduating from Brooklyn's Technical High School, Hoffman matriculated at Hobart College in New York State. He went on to graduate school at the Maxwell School of Anthropology at Syracuse University. He earned his PhD in anthropology with a dissertation titled, "The Myth of the Maritime Culture." He argued that the consistency of the culture in the merchant marine arose from the persistence of the conditions in which they worked, rather than other causes.

While writing his dissertation, Hoffman moved to St. Croix in the Virgin Islands. During his time there, he had come to know more and more about cuisine, working in restaurants and other venues. Afterwards, he moved to Philadelphia, Pennsylvania, finding that it reminded him of Toronto or Vienna, "a nice place." In Philadelphia, he began a 25-year careerwriting about food and wine for the Philadelphia Magazine, the Philadelphia Daily News, and other outlets. In the late 1980s he met and married psychologist Judith Sills; the now-divorced couple had a daughter, Spencer, in 1988.

From 1988 to 2003, Hoffman also taught the culinary arts at various institutions in the Philadelphia area, particularly at Drexel University as a scholar in the Residence in Food and Culture in the Hotel and Restaurant Managment Program. He is also the founder of Drexel's culinary arts major. He loved "having a roomful of smart youngsters and the chance to stir something up. . .I miss it like crazy." He said it was the most fun he had had in Philadelphia. While working in the midst of the culinary world, Hoffman wrote his first novel, The Bachelor's Cat (1997). Hoffman particularly loved"the voice in which it's written." The Philadelphia Inquirer's Thomas Brady says this is the story of a man who takes in an abandoned kitten and learns about the meaning of true love; Brady says the work "features a classic of its kind, a mouthwatering seduction dinner" and calls Hoffman a "man for all seasons." Joan Lowell Smith wrote in the Newark Star Ledger:

The bachelor he created is authentic, from his hangovers, messy rowhouse and messed-up relationships to his soft inner core where the cat curls inside. Although there are crises, the ending is sweet without being insipid.

In the middle of the 2000s, Hoffman's attention was riveted by an incident in Philadelphia in which a six-year-old was shot. He found the carelessness of the shooting disturbing and found himself wanting the girl to be remembered. He found himself so provoked by the Pennsylvania Rifle Association's reaction that he could not sleep. Hoffman began working on a novel that eventually became bang BANG, and he worked with an online novel workshop. This eventually lead him to Kunati Publishers, who published the book in 2007.

The novel bang BANG is the story of a young woman who witnesses the shooting of her best friend. In the aftermath of the trial of the assailant, the young woman tells a reporter that "it's not the gun that frightened me...it's the man." Gun rights organization use that sound bit for their own purposes, enraging the protagonist and driving her to become a vigilante who shoots out the windows of cars with gun rights stickers. Kirkus Reviews said it was "Thoroughly charming and sure to enrage the NRA, which is, of course, the point." David Pitt wrote in Booklist:

The characters are tough and believable, and the dialogue positively sings. In many ways it's the literary equivalent of a Tarantino movie: edgy, streetwise, and a little arrogant (don't expect a balanced look at the subject of gun control), with a strong and determined female protagonist. Brilliant might be too big a word for this novel but not by much.

Hoffman very much appreciated the positive reviews of this novel, saying they were the type of reviews he wished his parents were alive to see. He went on to admit that he thought his father would have liked the reviews better than the actual book. He himself found the book funny, though he had not set out to write a funny book. Rather, he attributedthe humor to the irony of the situation. He also enjoyed conducting public readings of parts of the book because it "invites you to chew the scenery."

Hoffman published several nonfiction works in 2007. Pearson Prentice Hall published his New Short Course in Wine and Amazon.com published three short works on beer. In line with these interests, he said, "I guess I'd like everybody to have a glass of good wine and then go kiss somebody they care about" and that "wine is just yoga with 12 percent alcohol thrown in." He also maintains several blogs on the subjects of wine, beer, and food, and in 2014 began a Fundamentals of Beer course at Drexel. When we talk about history, civilization, we think we know what matters, Hoffman toldPhilly.com writer, Nick Vadala. But what really matters is food and drink, and people's daily lives.

Even in the wake of being diagnosed with stage IV cancer of the throat, Hoffman seemed to care less about whether he lived than about how he lived, says his friend Hugh Gilmore. Hoffman chronicled his cancer treatment in a blog and later developed it into the book Radiation Days: The Rollicking, Lighthearted Story of a Man and His Cancer (2014). It mixes unapologetic intelligence with good will and serves that combo up with the attitude you'd expect from an educated (a doctorate in anthropology) guy from Brooklyn (whose PhD thesis was based on his Merchant Marine service), says Gilmore. In fact the book eases into the philosophy of what it means to be human, what is the measure a life's worth, and what is important enough to ask for your time when your time might be scarce.

When asked by Vadala how Philly compares to other great beer cities, Hoffman said: If, in fact, you're truly living in the moment and the experience of having great beer, it doesn't matter what's happening anywhere else. The reality is your experience. The things that you think might validate your experience—ho-f***ing-hum. I mean, be here now, brother.