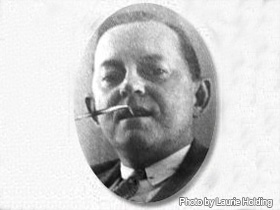 James C.C. Holding was born in Allegheny County in 1907. Educated at Yale, he became an advertising executive in the Pittsburgh branch of the firm BBDO. After 25 years at the company, he retired and began a second career as a writer. Though he wrote 18 children's books, he is best-known as one of the many writers under the pen name"Ellery Queen." He would write over 250 mysteries for that genre and others. Holding passed away in a Pittsburgh hospital in 1997.

Holding attended Yale University and was a member of Alpha Chi Rho. He graduated with an ABin 1928. Holding then took the next year off to travel throughout Europe. When he returned, he took a job in Pittsburgh with Harbison Walker Co. as a firebrick salesman. After a short stay at Harbison Walker Co., he began to work as a junior copywriter at Batte, Barton, Durstine & Osborne in Pittsburgh. He was a copywriter from 1930 to 1944. In 1944, he moved to copy chief. During this time he created the advertising slogan for Fort Pitt beer: "Fort Pitt, That's It." He became vice-president after eight years, and he remained in this position until 1958. While holding this high position in the company, Holding suffered the traumatic loss of his son, which eventually drove him to retire from the firm. At this point, though, Holding became a consultant, where he remained for the next ten years. Then, in 1959, he began freelance writing, which he continued until his death. Holding's first juvenile book, The Lazy Little Zulu, was published in 1962, a few years after he began his freelance writing career.

Holding's writing established him in the field of mystery, as well as in children's literature. He wrote 17 juvenile books. He was also the author of more than 160 mystery stories under the pseudonym of Ellery Queen and edited many other stories. Holding wrote short mystery stories for Ellery Queen Mystery Magazine, Alfred Hitchcock's Mystery Magazine, and Mike Shayne's Mystery Magazine, along with other similar periodicals. One of the more famous villains he created in his mysteries was Manuel Andradas, a Brazilian hit-man who disguised himself as a photographer. He was also a contributor to travel magazines such as Clipper and Signature. Holding won the John Masefield Poetry Prize and the John Hubbard Curtis Poetry Prize twice.

James and Janet Holding moved to Sarasota, Florida, in 1971, but returned in 1991 when their health began to fail. Holding spent his last years living with his wife Janet at the Sherwood Oaks Retirement Home in Cranberry, Pennsylvania. Holding died March 29, 1997, in Pittsburgh, Pennsylvania.