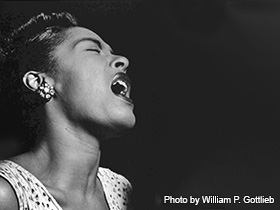 The great jazz vocalist Billie Holiday was born in Philadelphia.

Billie Holiday was a famous American jazz singer who recorded her most prized musical work between 1935 and 1942. She was born in Philadelphia, Pennsylvania, spent her early childhood in Baltimore, Maryland, and lived the rest of her life in New York City, New York, where she was discovered and most often performed. She wrote an autobiography in 1956 with the assistance of William Dufty, but her book is thought to be highly embellished and so inaccurate that it is more commonly read as a creative work than as a biography. Billie Holiday died in 1959 as a result of health problems brought on by her heavy drug use. One of her most famous musical renditions, "Strange Fruit," embodied the many struggles Holiday suffered throughout her life as an African-American woman.

Billie Holiday was born to Sadie Fagan and Clarence Holiday in Philadelphia, Pennsylvania, in 1915. The facts of her life are somewhat vague; dates, places, and other details of her life are subject to some scrutiny. The name that appears on her birth certificate is Elinore Harris, but she went by the name Eleanora Fagan until she began her music career and changed her name to Billie Halliday. Holiday's father abandoned the family when she was young, so at the outset of her career, she altered the spelling of her surname to Halliday to distance herself from her negligent father. She later switched the spelling of her name back to Holiday and was given her famous nickname "Lady Day" by tenor sax virtuoso Lester Young. She picked up the nickname "Billie" as a child due to her admiration for her favorite movie star, Billie Dove, and the name stayed with her until her death. Holiday grew up in Baltimore—causing some to believe, inaccurately, that she was born there—and endured a difficult childhood. She was sent to a reformatory at the age of 10 for delinquent behavior and thus never received much education. As a teenager, Holiday moved to New York City in either 1928 or 1929 to reunite with her mother who had moved there several years prior in order to get a better job. At this point, Billie Holiday began singing in small jazz clubs in New York, quickly earning herself a reputation as a talented American jazz singer.

Billie Holiday's career truly took off in 1933, when writer and producer John Hammond discovered her singing at a New York club called Monette's. Hammond immediately arranged three recording sessions with Bennie Goodman for the talented young woman and began booking engagements for her in clubs all over New York. Holiday first appeared in the Apollo Theatre in 1934. In 1935, Hammond brought her into the studio regularly to record her singing with bands containing some of the finest jazz musicians of that day. As her reputation grew, Billie Holiday performed with mainstream acts like Count Basie and his renowned orchestra in 1937, and Artie Shaw and his big band orchestra in 1938. In 1939, she began an engagement with Caf?? Society, a nightclub in Greenwich Village, and it was around this time that she recorded her famous song about the lynching of African-Americans, "Strange Fruit." By the end of the 1940s, Billie Holiday was considered a famous jazz star, being voted the best jazz vocalist in Esquire magazine reader's poll, and appearing in the 1946 film New Orleans with Louis Armstrong and Kid Ory.

Billie Holiday credited her unique singing style to her role models Louis Armstrong andBessie Smith. It is said that Holiday had vocal limitations: her range was barely more than an octave. But these limitations didn't hold her back. She reconstructed many popular songs by streamlining the original melodies and embellishing them with her unique improvisations and intonations. In this sense, Billie Holiday was a true jazz singer because she constantly re-created, improvised, and invented in her musical performances.

Unfortunately, at the height of her musical career, Billie Holiday began using hard drugs like cocaine and opium, in addition to regularly consuming alcohol and smoking cigarettes and marijuana. By the late 1940s, her drug addiction and chronic depression brought her career to an abrupt halt. In 1947, Holiday was arrested for drug charges and voluntarily accepted placement in a federal drug-rehabilitation center for a little over a year. Several days after leaving the rehabilitation center, Holiday performed before a packed house at Carnegie Hall, but her musical career changed permanently after her time in rehabilitation because her cabaret license was suspended, prohibiting her from performing in Manhattan establishments that served alcohol. In 1954, she toured Europe and appeared at Royal Albert Hall before an audience of 6,000. By this point, her performances weakened as her physical health and vocal condition simultaneously deteriorated. Before her death in 1959, with the assistance of watchdog William Dufty, Billie Holiday wrote her autobiography, Lady Sings the Blues (1956). Although some of the facts in the book are questioned, the work addressed all of the difficulties Holiday experienced with drug abuse and growing up in poverty. It was later made into a motion picture in 1972. Billie Holiday died in 1959 at a hospital where she was being held under house arrest for possession of narcotics.