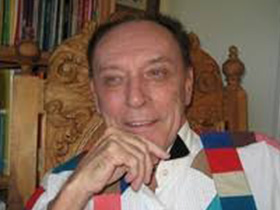 Lee Bennett Hopkins, anthologist, educator, and poetry advocate for children, was born in Scranton in 1938.

Lee Bennett Hopkins, born in Scranton in 1938, was famous for his work as an anthologist, author, and avid promoter of children's poetry. He compiled more than 80 anthologies on subjects including animals, weather, school days, sports, U.S. history and geography, and holidays for young people. Though his subjects were outwardly ordinary, Hopkins treated them in eccentric ways. For example, Hoofbeats, Claws & Rippled Fins: Creature Poems (2001) is about odd pets like tarantulas and how to love them. His anthologies have won widespread acclaim from book critics and include both well-known and newly published works. Hopkins passed away on Thursday, August 8, 2019, at the age of 81.

Lee Bennett Hopkins was born in Scranton, Pennsylvania, on April 13, 1938. His family was poor and consisted of his father, mother, younger brother, and younger sister. His father, Leon Hall Hopkins, was a police officer. His mother was Gertrude Thomas. When Hopkins was only nine, his family went to live with his grandmother in Newark, New Jersey, due to financial uncertainty. Four years later, the money situation had not improved, and his parents divorced as a result. Hopkins was 13. He continued to live with his mother and two siblings, and soon after the separation, the family moved to a low-income housing project in Newark. As the eldest child, Hopkins took after-school jobs to support the family.

Hopkins' first experience with reading came through comic books and movie magazines. He performed well in high school English, but disliked and struggled with other subjects. One teacher, Mrs. McLaughlin, took interest in Hopkins—exposing him first to plays, then to more reading, which Hopkins enjoyed. Hopkins later named McLaughlin as one of the most influential people in his life. After graduating, Hopkins felt the call to teach. He enrolled at Newark State Teachers College (now Kean University) in Union, New Jersey, and majored in education. His grades improved in college, even while he worked at several jobs to support himself.

In 1960, Hopkins's hard work paid off. He received his Bachelor of Arts degree and began his professional career teaching sixth grade at Westmoreland, a public school in Fair Lawn, New Jersey. At Westmoreland, Hopkins first explored the potential of poetry as a medium to edify children. Poetry excited him, and he wove it throughout his teaching, even the math and physical education curriculums. Westmoreland's administration valued Hopkins; he advanced to the position of a resource teacher in only his third year. He was responsible for providing curricular support materials for other elementary school teachers. Hopkins continued to use poetry to reach young people, and later his anthologies reflected his public teaching career.

Hopkins was given a scholarship to pursue his Master's Degree at Bank Street College of Education in New York City. He continued to work as a resource teacher at Westmoreland, and he received his Master of Science in 1964. A new opportunity opened up in 1966. Hopkins joined Bank Street College's new Learning Resource Center in Harlem, New York, serving as a senior consultant and working with underprivileged minority children—children with difficult backgrounds like his. Hopkins used the poetry of African American poets, namely Langston Hughes and Gwendolyn Brooks, to reach the children. Around this time Hopkins began to write scholarly articles on children's literature and the effect of poetry in the classroom. He was published in well-known and well-respected journals such as Horn Book and Language Arts.

In 1967, Hopkins received a Professional Diploma in Educational Supervision and Administration from Hunter College of the City University of New York. However, his time in Harlem was short-lived. Soon after the assassination of Dr. Martin Luther King in 1968, Hopkins was forced to leave because of suspicion of Caucasians.

Hopkins was hired the same year by Scholastic Magazines, Inc. as a curriculum and editorial specialist, and his work flowered. More than 24 of his books were published during his eight-year tenure at Scholastic.

A recipient of numerous awards and honors, Hopkins earned the Christopher Award, 1989 Pennsylvania Author of the Year award, and 1989 Silver Medallion from the University of Southern Mississippi. Hopkins founded his own award, the Lee Bennett Hopkins Poetry Award, presented annually since 1993 through the Pennsylvania Center for the Book, affiliated with the Center for the Book at the Library of Congress and sponsored in Pennsylvania by Penn State University Libraries. He also founded the Lee Bennett Hopkins/International Reading Association Promising Poet Award, presented every three years since 1995. Hopkins earned starred reviews from Publisher's Weekly and School Library Journal for his 2009 work City I Love. He also earned star reviews for his 2009 collection Sky Magic and his 2010 Sharing the Seasons. In 2009, Hopkins won the National Council of Teachers of English (NCTE) Excellence in Poetry for Children. In 2010, Hopkins received further recognition when he received the Florida Libraries' Lifetime Achievement Award.

Many of the works in Hopkins's anthologies were commissioned from top contemporary poets whom he refers to as his "take-out poets."

Hopkins wants children to feel the emotional impact of poetry. He wrote Pass the Poetry, Please!—which has been in print for over 25 years—to help teachers understand that poetry is "reachable, is teachable, and should come to children as naturally as breathing." Hopkins insists that poetry need not be dissected to death, but rather should be read and enjoyed. "Poetry is magical, mystical. I maintain that more can be said or felt in 8 or 10 or 12 lines than sometimes an entire novel can convey," Hopkins said in a HarperCollins interview.

He was recognized as the Most Prolific Anthologist of Poetry for Children by Guinness World Records LTD in 2011 for publishing over 120 collections. "When I received word they had nominated me, and then accepted into the world records," Hopkins told eMackin writer, Amy Meythaler, "I was very moved. I'm thrilled to be honored with something like that."

According to a 2013 article in Penn State News, Hopkins has arranged to give the Pennsylvania State University Libraries his 18,000-volume book collection and correspondence papers from his lifelong career in children's literature. "'Lee's collection is an extraordinary treasure for the history of children's literature and the future of children's education,' said Dean Barbara I. Dewey of the University Libraries. 'The resources Lee has compiled are one-of-a-kind in the world and are critically important to the Libraries' mission of scholarship and preservation of important historical documents. We are honored that Lee has chosen to entrust Penn State with the collection's future care.'"

The approximate value of the collection is $3.25 million. "I was born in Scranton, Pennsylvania," Hopkins tells eMackin's Meythaler, "and this is my way of giving back to the place where I was born. Penn State has one of the best libraries in the country, and I have one of the best collections of children's poetry other than the Library of Congress. I'm hoping this will be an avenue for future students for research."

Lee Bennett Hopkins continued to work and write through his final days, including drafting adult novels. "You never know if they will be published," he said of his novel writing. "…but it is great fun, a new challenge. Isn't challenge what life is all about?" On Thursday, August 8, 2019, Hopkins pass away due to chronic obstructive pulmonary disease. He is survived by his partner of 50 years, Charles Egita; brother, Donald; and a sister, Donna Hopkins Venturi.

"Poetry has been– is my life," Hopkins stated in the afterword of the 2017 festschrift produced by the Pennsylvania Center for the Book and Penn State University Libraries to celebrate 25 years of his namesake award. "I have said it before; I shall continue to say: Nothing – no thing – can ring and rage throughout hearts and minds as does this genre of literature."