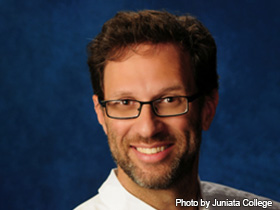 Jay Hosler is a Professor of Biology at Juniata College in Huntingdon, Pennsylvania, who has taught scientific subjects through graphic novels and short comics and is the creator of comics, such as Clan Apis (2000) and The Sandwalk Adventures (2003).

Jay Hosler can be described as an advocate of innovative teaching, given his unique method of teaching biology with his own personal comic books. Hosler was born in Huntington, Indiana, and went on to graduate from DePauw University in 1989. As a young child, Hosler could recall "riding to three different drugstores every week on the day new comic books were delivered to the spin racks," according to an interview with Lawrence Biemiller in The Chronicle of Higher Education. In his days at DePauw, Hosler was interested in unorthodox methods of learning and he regularly contributed comics to the university paper. This continued when he received a paycheck for his daily cartoons in the student paper at the University of Notre Dame, where he was working towards his PhD in Biological Sciences. After completing his PhD in 1995, Hosler became a postdoctoral fellow at the Rothenbuhler Honey Bee Research Laboratory at the Ohio State University. His first instance of introducing comics and science came with Cow-Boy, his 1997 comic adventure about a man dressed as a cow.

After accepting a position as Assistant Professor of Biology at Juniata College in Huntingdon, Pennsylvania, Hosler again began examining the educational impact of comics. While he has published numerous scientific works on the specific mechanics of honey bee colonies, his most widely popular publication has been Clan Apis (2000), his comic book rendition of life within a honey bee colony. Hosler realistically depicts the life of Nyuki, a bee in the hive, from her first stage as a larva to her death. Jim Ottaviani of The Comics Journal described Hosler's endeavor as "an entertaining and slyly educational look at a very real and very complex society totally unlike our own."

Clan Apis was a recipient of a 1998 Xeric Award for the best independent comic in the self-publishing field. It was nominated for three of the Small Press Expo's Ignatz Awards (1999: Outstanding Series; 2000: Outstanding Series & Outstanding Graphic Novel or Collection). It was also nominated for three Will Eisner Comic Industry Awards (2000: Best Limited Series, Best Title for a Younger Audience & Best Writer/Artist-Humor) andnamed one of the Young Adult Library Service Association (YALSA) top graphic novels for 2002. Tony Isabella of the Comic Buyer's Guide praises Clan Apis for its overall appeal, even to the less scientifically minded. In his column "Tony's Tips!" he writes, "Clan Apis has fascinating facts, great characters, and very clever dialogue. Even if you're not 'buggy' about the subject matter, you're going to be intrigued by the scientific information which the cartoonist entertainingly weaves into his tale...Even the supporting characters have that spark of reality that's so important to creating and sustaining a reader's suspension of disbelief. And, the conversations between all these characters are nothing short of delightful."

With the success of Clan Apis, Hosler began work on his second major comic publication, The Sandwalk Adventures (2003). In this comic tale, Hosler explores the theories of evolution through conversations between Charles Darwin and a follicle mite that lives in his eyebrow. This approach to a controversial topic allows Hosler to explain the facts of evolution through a universally accepted method: drawings and entertainment. Hosler has the follicle mite, a female whose life span is two months, ask Darwin common questions about her origin, thus allowing him to convey his theories towards evolution.

Ain't it Cool Comics compares The Sandwalk Adventures to other advocates of learning through entertainment, "if you've ever enjoyed Schoolhouse Rock or Bill Nye the Science Guy or even that Animaniacs song where they name all the nations of the world to the tune of the Mexican Hat Dance, well, you should understand that educational stuff can be pretty fun when dispensed with wit and imagination." Lawrence Biemiller writes in the Chronicle of Higher Education: "What The Sandwalk Adventures turns out to be, besides an entertaining and educational read, is a subtle and beautifully inked commentary on creationist opposition to the teaching of evolution."

Hosler has also posted one-to-two-page comics online and through Your World: Biotechnology and You, a premier biotechnology magazine targeted at students grades 7 through 12. These shorts comics are a creative means of informing young audiences about scientific topics. For example, he explains the extinction of the dinosaurs by putting the asteroid responsible in a jail cell with a taunting inmate. The inmate feels the asteroid is taking credit for a monumental "crime" that could not have been committed without help. By ridiculing the asteroid, the inmate subtly touches upon the main theories of the mass extinction of the dinosaurs.

In 2011, his comic Evolution: The Story of Life on Earth, illustrated by Kevin Cannon and Zander Cannon, was published. Optical Allusions, a biological exploration of the eye, followed in 2013 as a self-published work. Continuing on the Sandwalkers topic of bugs, Hosler published Last of the Sandwalkers in 2015.

At the time of this writing, Jay Hosler serves as a Professor of Biology and Chair of the Biology Department at Juniata College in Pennsylvania. He continues to write and draw graphic novels that focus on natural history, evolution, and insects, according to his personal website. With support from the National Science Foundation, his lab has also been examining comics as pedagogical tools.