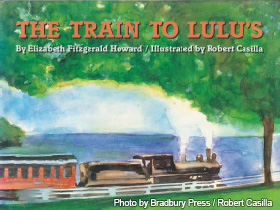 Librarian and author of The Train to Lulu's (1988), Elizabeth Fitzgerald Howard has spent much of her life in Pittsburgh.

Elizabeth Fitzgerald Howard, born in Baltimore, Maryland on December 28, 1927, is an author of esteemed children's books. Many of her stories about African American families have received awards throughout the years. Not only is Howard a great children's book author, she is also a professor and has been a librarian over the course of her life. Howard spends her time serving on committee boards and keeping active memberships with many literature associations.

Elizabeth Fitzgerald Howard was born on December 28, 1927, in Baltimore, Maryland. She is the daughter of Bertha McKinley James Fitzgerald and John MacFarland Fitzgerald. Both her parents were teachers. Howard's parents ensured that Elizabeth had a good education, and she attended Radcliffe College where she graduated in 1948. According to Barbara Rollock in Black Authors and Illustrators of Children's Books, she was president of her class at Radcliffe her senior year. Howard also graduated from the University of Pittsburgh in 1971 and 1988 where she earned her master's degree in library science and her doctorate, respectively.

Soon after graduating from Radcliffe College, Howard began her first job in the Boston Public Library working as a catalogue assistant. This began her long-time interest in libraries and being a librarian. According to The Gale Literary Database: Contemporary Authors Online, even though Howard became a writer and a professor later on in life, she always reverted to working in or with a library. She lectured on library science and eventually she became a professor in library science, as well. On February 14, 1953, Elizabeth Fitzgerald married her husband, Lawrence Cabot Howard, who was also a professor. They had three children together: Jane, Susan, and Laura.

Like many other authors, Howard incorporates some of her own life experiences into her works of children's fiction. Contemporary Authors Online quotes Howard as stating, "It was inevitable that I would think back to my own childhood when I began to write stories for children." One of her first stories, The Train to Lulu's (1988), is based on an experience that Howard had with her sister on a train when they were young girls. The Train to Lulu's was Howard's first effort in writing fiction stories about the encounters of children from an African American family.

Howard's goal throughout her writing career was to give children books that have the richness of the African American culture entwined within. She is quoted by Rollock as saying, "I would like present-day children [...] to know that blacks have been a part of all this country's growth since the beginning [...and that they] hoped that the American dream included them. And lived as though it did, in spite of everything that might or might not have gone wrong."

Many of Howard's children works have been praised by critics. Papa Tells Chita a Story(1995) is a children's book in which a little girl named "Chita" listens to stories her father is telling about some of his past experiences in the Spanish-American War. Ruth Semrau of the School Library Journal states "students will [...] enjoy this engaging tall tale for what it is, and perhaps retell some of their own family stories." Virgie Goes to School with Us Boys(1999) is also another book that is reviewed well by critics. It is a story of a little girl living in the Reconstruction South who wants to go to school with her older brothers. Diane Roback, Jennifer M. Brown, and Cindi Di Marzo reviewed the book in Publisher's Weekly in 1999 and said, "Virgie is a radiant heroine. The easy flow of vernacular effortlessly propels the story, and Howard proves herself adept at plucking a large-scale episode from history and adapting it to the scale of a picture book."

Amongst her writing career and other interests, Howard keeps active memberships with the American Library Association, the Pennsylvania School Librarian's Association, the Children's Literature Association, and the Society of Children's Book Writers. She has also served on a several committees: the Caldecott Committee, the Hans Christian Andersen Committee, and the Teachers of Children's Literature Discussion Group in ALA. Elizabeth Fitzgerald Howard is a woman who likes to keep busy. Along with spending time with her grandchildren, she was also a member of the Board of Magee Women's Hospital where she served as the chair of the ethics Committee, the QED of communications and Beginning with Books at the hospital. At the time of this writing, Howard lives in Pittsburgh, Pennsylvania, with her family.