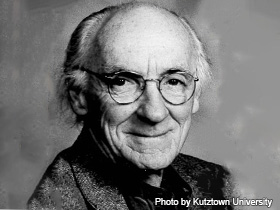 A National Endowment for the Arts Fellow, poet Harry Humes is the author of August Evening with Trumpet andat the time of this writinglives in the Kutztown area.

Born into a small coal-mining community in Schuylkill County, Pennsylvania, Harry Humes channeled his formative years into several award-winning poetry collections. He is the recipient of Poetry Northwest's Theodore Roethke Poetry Prize, a National Endowment of the Arts Poetry Fellowship, and several grants from the Pennsylvania Council on the Arts. Humes also had his collection Butterfly Effect (1999) published for the National Poetry Series. He has held professorships at Kutztown University and Cedar Crest College in Allentown, Pennsylvania. In 2001, he was a featured poet in the Public Poetry Project of the Pennsylvania Center for the Book.

Harry Humes was born in Girardville, Pennsylvania, which he affectionately refers to as "a small run-down coal mining town in Schuylkill County." Like many Eastern Pennsylvanian towns, Girardville revolved around the coal industry. Humes' father, older brother, uncle, and cousins all toiled in the mines. Although he and his younger brother escaped that faith, the lifestyle still became ingrained with Humes's early life. The themes that surrounded him as a child later became the themes of his work as a poet.

Humes joined the army in 1958. Upon his return in 1960, he enrolled at Bloomsburg State College (now Bloomsburg University) to study business. His interests changed during the course of his studies, and he graduated with a Bachelor's degree in English in 1964. He undertook graduate work at the University of North Carolina at Greensboro, where he earned his Master of Fine Arts in 1967. The following year he returned to Pennsylvania to become a Professor of English at Kutztown University, where he taught until 1999.

While on professorship, Humes contributed poetry and stories to many periodicals, including Antaeus, Gettysburg Review, Massachusetts Review Poetry, Poetry Northwest, Prairie Schooner, Tar River Poetry, and Virginia Quarterly Review. He was also the Editor of Yarrow and Stone Country Poetry Journal. His first poetry collection, Winter Weeds (1983), was published when Humes was in his forties. This volume won the Devins Award, established in 1965 by the University of Missouri Press to recognize innovative, fresh voices in poetry. Eleven more of his collections have since been published, with several garnering accolades.

Poetry Northwest awarded Humes the Theodore Roethke Poetry Prize for his poem "Calling in the Hawk." His poem "Butterfly Effect" was selected by James Tate for Best American Poetry of 1997, and his collection of the same title was recognized by The National Poetry Series in 1998. He is a recipient of a National Endowment for the Arts Poetry Fellowship (1990) and several grants from the Pennsylvania Council on the Arts.

Throughout his writing career he frequently returned to the themes of his youth in Schuylkill County, such as family, understated courage, the charms of nature, and the triumphs and troubles of coal mining. Humes said, "It seems...that I have never left [Girardville], since I have been obsessively writing about it for a long time in poem, stories, essays...I have found many important directions in that town." The hardships of miner families in particular form a recurring theme. His poem "Raven Run Coal Breaker," from August Evening with Trumpet (2004), serves as a prime example:

Soot-stained, every glass pane smashed,
a cenotaph filled with pigeons
cooing from high catwalks,
corrugated iron walls rusted through.
Over there a railroad bed,
truck tires, cables, the dirt road
winding past orange water, spill banks,
pink laurel blossoms.
Once you could see blurred faces
behind begrimed windows,
and feel the pound and thump
of big spiked rollers shattering lumps of coal.
Voices and faces have been lost in dust,
dust sifting into row homes
and over cups and saucers,
the whole place a gigantic raving chimney
Until there was nothing left
to be sucked into its blackened guts
except a dry hacking cough,
breath taken away


The appeal of Humes's poetry lies in his "sparse, beautifully made lines," according to reviewer Dean Henning. He reflects his subjects by keeping his work simple, accessible, and emotionally subtle. His poem, "Showing a Friend My Town," from Bottomland (1995), was selected for publication by the Public Poetry Project of the Pennsylvania Center for the Book in 2001. In 2007, he won the Keystone Chapbook Prize for his poetry chapbook, Underground Singing.

Humes presents his work regularly at readings across Pennsylvania, with recent appearances at the Bloomsburg Public Library and Mad Poets' Society in Media. He currently lives with his wife near Kutztown, Pennsylvania.