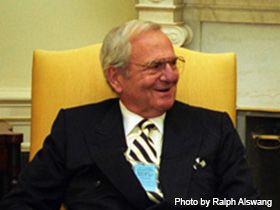 Iacocca wrote two bestselling books about his 46 years of experience as an executive in the automotive industry. He became a corporate celebrity after saving Chrysler from almost certain bankruptcy in the 1980s. On July 2, 2019, he died of natural causes. He was 94.

Lido (Lee) Iacocca was born in Allentown, Pennsylvania, on October 15, 1924. His parents were Nicola Iacocca, a businessman, and Antoinette Iacocca. On September 29, 1956, Iacocca married Mary McLeary, with whom he had two daughters. After her death, Iacocca remarried; that marriage ended in divorce.

Iacocca attended Lehigh University where he majored in engineering, and he later earned a master's degree in engineering from Princeton University. Hired by the Ford Motor Company as an engineer, he soon proved to be a more successful salesman. Iacocca held several prestigious positions with Ford and ultimately served as the company's president from 1970—78, a position he earned after successfully championing the production of Ford's signature car, the Mustang. He was later fired by Henry Ford II for personal reasons and eventually took the helm of the wavering Chrysler Corporation, turning it into a successful business. He served as president and chairman of the board and became the chief executive officer in 1979. Iacocca chaired many organizations, including the Statue of Liberty-Ellis Island Centennial Commissions and the Statue of Liberty-Ellis Island Foundation.

Working with author William Novak, Iacocca chronicled his experience and remarkable achievement in business in Iacocca: An Autobiography in which he described his problems with the capricious Henry Ford and discussed the hardships he first encountered with the unsteady Chrysler Corporation. Critics say the book reads the way Iacocca talks, and after its success—it sold more than two million copies in its first year of publication—Iacocca began a second book, Talking Straight, with the help of Sonny Kleinfield of the New York Times. Elaborating on some of the personal stories left out of his autobiography, Iacocca related his fond appreciation of his daughters and his late wife, Mary. He also talked about politics a great deal—even describing an earlier plan to run for the presidency—and listed his eight commonsense "commandments of management."

Iacocca was also known as the "Father of the Mustang" and was credited with helping with the model's initial design. In 1984, he won the Ralph Coats Roe Medal from the American Society of Mechanical Engineers. Iacocca also received honorary doctorates from numerous colleges and universities including Duke University, Massachusetts Institute of Technology, and the University of Michigan. He devoted much of his time after 1984 to the Iacocca Foundation that he set up to promote research on diabetes, the cause of his wife's death.