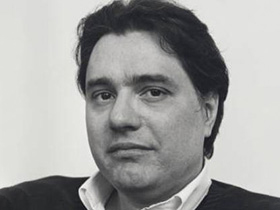 South Philadelphia playwright Albert Innaurato had a great hit with Gemini in the late 1970s.

South Philadelphia native and playwright, Albert Innaurato attended the Yale School of Drama. After battling illness, he was able to complete his widely successful play, Gemini (1977), which ran for four years on Broadway. A jack of many trades, Innaurato also worked as a journalist, critic, and lecturer. Innaurato passed away on September 24, 2017, at the age of 70.

Albert Innaurato, a South Philadelphia playwright, was born on June 2, 1948. Little is known about his childhood. According to an article in the Philadelphia City Paper by Steve Cohen, he grew up on 20th and Ritner. Innaurato graduated from Central High and attended Temple University as a theater major. From there he went to the California Institute of the Arts.

Innaurato's career as a playwright began at the Yale School of Drama where he enrolled in 1972. It was here at the Yale School of Drama that Innaurato ended up in a class with Christopher Durang, Sigourney Weaver, and Meryl Streep. Durang and Innaurato would later go on to write a few plays together, including The Idiots Karamazov (1974). During this time, he stayed at Edward Albee's House for Writers and managed to write his first distinctive play The Transfiguration of Benno Blimpie (1978). Innaurato explains in an introduction to "The Best Plays of Albert Innaurato," that Benno Blimpie actually began as a vivid dream. Innaurato recalls how "solving the play in dream form was difficult, to say the least," (Innaurato 1987).

The most successful of all Innaurato's plays came when he was just 25. Gemini (1977) actually ran for four years on Broadway, despite being despised by the critics. Gemini was written after Innaurato's Guggenheim Grant ran out and he had to hold a series of menial jobs in order to survive. Things turned for the worse when a medical condition, specifically a surgical procedure he had undergone while at Yale School of Drama, had hemorrhaged. At this point Innuarato was struggling to survive and had no health insurance. He developed a high fever and, unable to keep his messenger job, had to beg for help. Howard Stein, the Dean of Students at Yale, stepped in, making another surgery possible (which again became infected, causing him to develop yet another high fever) the day after Innaurato wrote the last scene of Gemini. Innaurato received the Rockefeller Grant, which helped him to put the finishing touches on Gemini, but was too late to help with any surgery costs. Gemini is a vulgar comedy about an Italian-American boy, Francis Geminiani, who is home in South Philly for the summer from Harvard and is very sexually confused.

When it first opened at Playwright Horizons in 1976, Gemini was not well-liked at first. Critical opinion changed, however, and Innaurato received an Obie Award for Best Play. While the initial reviews were positive, no interest came from bigger theaters. After a chance encounter with Marshall Mason, a producer who was desperate for a play, Innaurato convinced him to run the play in Circle Rep. Eventually, Gemini found its way to Broadway where it remained for four years.

In October of 2004, nearly 30 years after its first opening night, Gemini was brought back in musical form to the Prince Music Theater. Innaurato collaborated with Charles Gilbert to write the lyrics.

Innaurato wrote many more plays, including Gus and Al (1989), Coming of Age in Soho (1985), Passione (1981), and Magda and Callas (1989). He wrote screenplays for Bette Midler, adapted operas, and rewrote books and lyrics. In addition, he wrote for newspapers and magazines. He became a cultural critic, writing about opera, music, and starlets. He also wrote screenplays for television and film. The most notable success was a screenplay he wrote for PBS called Verna the USO Girl (1978), for which he received an Emmy nomination. Innaurato presented lectures at the New York Philharmonic, the Los Angeles Philharmonic, and the Lincoln Center Chamber Society.

After living away from Philadelphia for a long time, Innaurato returned and lived on Rittenhouse Square during his final years, a place he described as "much posher" than what he knew growing up. One of his later works includes the one-act play Doubtless (2014), and he continued to write until his death on September 24, 2017. He was 70.