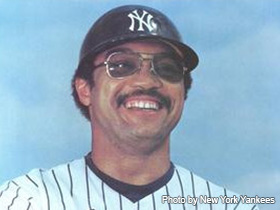 Jackson is known to most as a highly successful baseball player. He is also the author of a few books like Inside Hitting and Reggie Jackson's Scrapbook.

Reginald Martinez Jackson was born in Wyncote, Pennsylvania, and attended Arizona State University before entering Major League Baseball as his profession. A slugging outfielder, Jackson was a larger-than-life figure who saved his best performances for baseball's biggest stage. Nicknamed "Mr. October" for his ability to shine in baseball's autumn post-season showcase, Jackson earned Hall of Fame honors largely because of his phenomenal World Series play. He still ranks in the upper echelon in almost every offensive category in baseball. His career spanned 21 productive years for five different teams, and he finished with five World Series titles. He was also the first baseball player to have a candy bar named after him.

Reginald (Reggie) Martinez Jackson was born on May 18, 1946, in Wyncote, Pennsylvania. His parents split up when he was six years old, and Jackson grew up with his father, Martinez, who was in jail by the time Reggie Jackson graduated Cheltenham Township High School in 1964. In high school he was a four-sport varsity athlete. After graduation, Jackson decided to travel westward to pursue his college career at Arizona State University, where he played both baseball and football. Baseball soon emerged as the sport towards which his talent and passion were most geared. Scouts flocked to see the young protégé, and he was chosen second in the 1967 amateur draft by the Oakland Athletics.

Jackson quickly established himself as a powerful home-run hitter. However, notoriety on a national level did not begin right away. Many believed Jackson finally arrived on the scene when he swatted a home run over the roof at Tiger Stadium during the 1971 All-Star Game in Detroit. Jackson led Oakland Athletics to five consecutive American League West titles from 1971 to 1975. From 1972 to 1974 he led a dominant Oakland Athletics team to three World Series victories. He picked up the hardware for World Series MVP in 1973, allowing him to shine in the public eye. Jackson ranks in the top ten in almost every significant offensive category and Jackson has won the following awards:

When his time in Oakland concluded, he became the game's highest paid player by signing a five-year, $3 million contract with George Steinbrenner's New York Yankees. While he possessed a terrific talent, Reggie Jackson was sometimes considered too brash and arrogant by his teammates and the media. Jackson arrived in the Bronx in 1977. The public reaction worsened before he even put on the Yankee pinstripes because of an early-season publication in a sport magazine article in which he called himself "the straw that stirs the drink." Many believed that Jackson was taking a shot at then Yankee captain, Thurman Munson, claiming that he could not fill such a role. Tension regarding the Yankee clubhouse rose throughout New York and came to a head in June of his first season with the club. This infamous incident occurred when Jackson casually played a lofty single into a double, and manager Billy Martin sent Paul Blair to replace Jackson in right field. The ensuing dugout scene on national television showed Jackson screaming at Martin and showed the manager trying to break out of the grip of coaches to get at Reggie Jackson. Matters continued to decline the following year. Martin and Jackson's relationship was at a new low, and Martin lost his job as a result. While with the Yankees, Jackson was pursued to have a candy bar named after him. Sportswriters had a field day with the foul-tasting candy bar. One wrote that when you opened the wrapper on a Reggie bar, it told you how good it was.

Those elements of Reggie Jackson have stayed with him, but he is remembered in a more positive light for his on-field triumphs. Though he batted .300 only once in his 21-year career, Jackson smashed 563 home runs, tenth on the all-time list, and was the first player in history to hit as many as 100 home runs for three teams (Okland Athletics, Yankees, and Angels). He also had a record 2,597 strikeouts. He struck out more than 100 times in 18 seasons and led the American League in striking out five times. Still, the left-handed-hitting outfielder led the American League four times in home runs, three times in slugging percentage, twice in runs, and once in runs batted in. However, it is not his regular season accomplishments that make Reggie Jackson a baseball legend. Jackson is considered by many as the most clutch player in Major League Baseball post-season history. His feats spawned his famous nickname, "Mr. October."

Jackson exceled in postseason play, a member of eleven division champions, six pennant winners, and five world champions. Among his records in the League Championship are most series (11), games (45), at-bats (163) and, of course, strikeouts (41). He is also tied for playing on the most winners (6). His World Series batting average bested his regular-season mark by 95 points (.357 to.262). His most memorable feat came in Game 6 in 1977, when he belted three home runs on three consecutive pitches from three Dodgers pitchers as the Yankees won the clinching game. Jackson was unstoppable in the 1977 playoffs; he hit .450 to go with his record five home runs. He also set marks for the highest slugging average in a six-game Series (1.250), most total bases in a six-game Series (25), most runs (tied with 10), most runs in a game (four), and most times reaching base in a game (five). In 1980, Jackson belted 41 home runs to tie for the league lead and hit .300. But in the strike-shortened 1981 season, Jackson batted just .237 with 15 home runs in 94 games. Jackson wore out his welcome with Steinbrenner in 1982 when the owner refused to renew his contract.

This paved the way for Jackson to leave the Yankees the same way he had arrived, as a free agent. He ended up signing with the California Angels. Steinbrenner admitted his mistake in losing him because Jackson hit 39 home runs to lead the American League, and the Angels won the West in his first season (1982) with them. After that, Jackson continued to play with California for four more years, and then he returned to Oakland for a final season with the A's. Kansas City and Baltimore served as brief stops along the way at the beginning and middle of Jackson's career.

Reggie Jackson used his hectic life as the backdrop to delve into an unfamiliar world: the world of literature. Jackson displayed the literary side of himself by authoring three books about his life and baseball. Reggie Jackson: A Season with a Superstar and Inside Hitting with Reggie Jackson were both released in 1975. The former follows Jackson through the highs and lows of a long and tedious baseball season. Inside Hitting is still used by many coaches throughout America as an instructional guide for young players learning to perfect their swing. Lastly, Reggie Jackson: The Autobiography was released shortly after Jackson retired. His autobiography received acclaim because he did not sugarcoat any part of his life. Jackson could always be counted on to tell it like it was, both on the field and in interviews, and he followed suit in his books.

Today, Jackson can still be seen making appearances speaking across the country and occasionally on baseball telecasts. Jackson will forever carry an enduring legacy in baseball lovers' hearts as, what a 1974 Time Magazine dubs, "The most crunch time come through player on the best team in the world." Elected to the Hall of Fame in his first year of eligibility, Jackson was the only player inducted in 1993, an appropriate situation for a player who always sought the exclusive limelight. In retirement, Jackson served as a coach with several teams before accepting a hazy front office position with the Yankees in 1996. He was fired by Steinbrenner in 1998 for running up thousands of dollars in unapproved expenses on his team credit card. More than ten years later, Reggie Jackson and other retired Yankees legends such as Goose Gossage, Yogi Berra, and Lou Piniella, who all won championships with the Yankees, returned to Yankee Stadium for the 65th annual Old-Timer's Day to be honored by new Yankees and fans alike. As the saying goes, "Once a Yankee, always a Yankee."