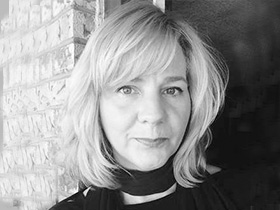 A Trafford, Pennsylvania, native and former flight attendant, Lori Jakiela is the author of the humorous memoir Miss New York Has Everything (2006).

Lori Jakiela was born in Pittsburgh in 1964. Adopted by a family in Trafford, Pennsylvania, she has made that town her home ever since. After widely varied careers that included being a newspaper reporter and a flight attendant, she began writing and published books, including her volume of poetry, The Regulars (2001), and her essay collection, Portrait of the Artist as a Bingo Worker (2017). At the time of this writing, Jakiela is a Professor of English and Creative Writing at the University of Pittsburgh - Greensburg.

Author Lori Jakiela was born on February 6, 1964, in Pittsburgh, Pennsylvania. She was adopted by Walter and Alberta Jakiela at one year old. Jakiela grew up in Trafford, Pennsylvania, attending Penn Trafford High School. She matriculated at Gannon University in Erie, majoring in English and Journalism. Jakiela received an MFA in Poetry from the University of Pittsburgh. She is married to Dave Newman, a creative writer; the couple has two children. Before taking a position at the University of Pittsburgh - Greensburg, she worked a number of jobs: newspaper reporter for the Erie Daily Times, waitress, and flight attendant among them.

Jakiela's writing career started with high school and college literary magazines and newspapers. She also worked for the Erie Daily Times as a student, publishing articles regularly. She published her first poem Tomato Harvest in a little magazine called Poem. She has since regarded the piece as "awful and melodramatic," yet the celebration thrown for her by her friends in the Pittsburgh writing community convinced her to keep working on poetry. In 2001 she published the poetry chapbook, The Regulars. It is a collection of both personal and local poetry that aims to avoid both self-absorption and overt sentimentality. The title poem represents the collection well:

Having always wanted to be one, I know What it means to remember their names And what they take in their coffee. It's a simple thing—to have a place Exactly three stools from the end, to escape the anonymity of menus and know that your needs are simple —a newspaper, fries with ranch dressing, a double shot of Jameson when you look like this— to be certain someone will come with a glass of water, that it's no trouble, rest, it's good you're here.

In 2006, Jakiela published her first memoir, Miss New York Has Everything. It is a series of stories that reminisce about her experiences as a New York-obsessed flight attendant and other stages of her life. She tells the audience about Trafford residents who auditioned to be extras in George Romero's zombie movies, beauty contestants, a rather-too-amorous Santa Claus, and a pill-popping nun who is also her aunt. Cristina Rouvalis in the Pittsburgh Post-Gazette writes that the cover "looks like it should carry a warning label: 'Chick Lit Alert.' But don't let appearances fool you. This is a marvel of a memoir... [that] brims with both small-town heart and big-city sophistication." Poet Ed Ochester wrote that it "reads like Hemingway channeling the Marx Brothers. It's the best memoir I've read in years." The first chapter, "I Am Not a Zombie, But I Played One on TV" was nominated for a Pushcart Prize.

Additional works of Jakiela's include the memoir The Bridge to Take When Things Get Serious (2013), poetry collection Big Fish (2016), essay collection Portrait of the Artist as a Bingo Worker (2017, and others.

At the time of this writing, Lori Jakiela is a Professor of English and Creative Writing at the University of Pittsburgh - Greensburg and lives in the Trafford house where she grew up. She is the recipient of the Press Club of Western Pennsylvania's Golden Quill Award and a Bread Loaf Writers Conference grant. According to her website, she co-directs the Chautauqua Institution's Summer Writers Festival, teaches community writing workshops at a yoga studio in her hometown of Trafford, and curates the Saturday Poem feature at The Pittsburgh Post-Gazette. Though Trafford has been "home" all her life, she confesses she has never tried the borough's chief culinary invention, the chocolate-covered pickle.