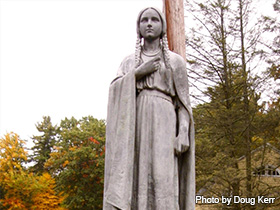 Mary Jemison, born sometime between 1742 and 1743, composed a memoir about her life with the Seneca Indians titled A Narrative of the Life of Mrs. Mary Jemison (1824). At the age of 15, she was abducted by the Shawnees and adopted by a generous Seneca family. Integrated into this new society, she married twice and had eight children. Her connection with Pennsylvania began when her family emigrated from Europe and settled in Gettysburg. Jemison was captured and traded in Pennsylvania but she spent most of her time in Ohio and New York. She died in 1833 on a New York reservation.

Mary Jemison's biography describes three cultures (the colonial frontier, the mid-late eighteenth century culture of the Seneca, and industrial American republic) from the perspective of a woman living with the enemy. Jemison's Scotch-Irish parents, Thomas and Jane Jemison, immigrated to American on the Mary William where she was born during the journey sometime between 1742 and 1743. She spent 15 years living on a farm 10 miles north of modern Gettysburg.

At 15-years-old, her family and friends were attacked by the Shawnees who were aiding the French during the Seven Year's War. It is estimated that the year she was captured was around 1758. After several days marching through the woods of the frontier, Jemison was surprised to be separated from her family and given moccasins. Later she described seeing her mother's red hair on one of the scalps the Shawnees were cleaning. The Shawnees took her to Fort Duquesne (modern day Fort Pitt). There she was adopted by two Seneca women. (The Seneca, as well as most tribal cultures, traditionally adopt and integrate prisoners into their society when they have lost a family member of their own. In this case, the Seneca family who adopted her had lost a brother.) Of these two she says in her memoir, I was very fortunate in falling into their hands for they were kind good-natured women.For this she was grateful. Jemison was renamedDickewamis by the tribe, which, according to historian June Namias, in Seneca, translates loosely to two falling voices.

In less than a year, Jemison learned the Seneca language. Not long after beginning her life with the Seneca, another tribe settled nearby and her new sisters told her she was going to marry a Delaware named Sheninjee. In 1760, not wanting to disobey them, she married him. Of Sheninjee she said, I loved him; to me he was ever kind in sickness and always treated me with gentleness. Sheninjee was absent when Jemison gave birth to her first baby. The baby girl lived for two days and died around 1761. Jemison was depressed by the loss, but says that over the next few years, rejoined by Sheninjee, she learned to harvest, cook and bake, and sew. The culture was characterized by mutual respect and generosity among its members. According to Namias, during Jemison's lifetime, Seneca women had rights possessed by few women in white or black America. In this culture, Jemison had more political power than her European-American peers. A few years later, she gave birth to a son whom she named Thomas after her father.

Depending on the season, her family would make the journey to return to the tribe's home along the Seneca River in New York. After her mother and sisters had already made the trip, it was time for Jemison, her son, her husband, and her three brothers to go. Sheninjee split from the group along the Genesee to take advantage of trading opportunities. In New York, Jemison arrived to a warm reception from her family. Of them she said, I loved them as I should have loved my own sister had she lived, reiterating Jemison's positive interpretation of her life with this family. Fall ended, winter passed and spring came around with no word about Jemison's husband. Finally in the summer, she heard from another trader that shortly after Sheninjee separated from her, he had taken sick and died.

When her son Thomas was three- or four-years-old, Jemison married an older man named Hiokatoo. Hiokatoo was a warrior and of her second husband she says, He was kind and tender, but as a warrior he was without equal for his cruelty. During the American Revolution, at the Capture of Fort Freeland, Hiokatoo served the British troops with 300 other Indians. Jemison says he tomahawked every wounded American. Yet, with Hiokatoo, Jemison gave birth to six more children each named in Scottish-Irish tradition after members of her biological family. The four girls she named Jane, Nancy, Betsey, and Polly, and the boys John and Jesse.

By the end of the Revolutionary War, Jemison had become friends with neighboring white settlers. Her family encouraged her to go and live with them. She said she did not leave because she feared if she had remaining family, they would not accept her having Indian children. To celebrate her loyalty, the Seneca gifted Jemison a piece of land. Although she may have spared her children from the potential bigotry of white society, she could not prevent her family's suffering. One of her sons, John, killed her first son Thomas and her youngest son Jesse while drunk. Jemison said that Jesse had started to follow white customs from associating with the neighboring society, which might have perturbed his brother. Her daughter Jane died at the age of 15. Jemison explained to Seaver that Hiokatoo died of consumption after 50 years of marriage. Fortunately, her three other daughters were alive at the time of Jemison's death and had their own families.

Around the age of 80, she was still working hard. One day she traveled four miles from her piece of land to the village of Castile, New York, with a neighboring white man who she trusted. It was in Castile where she met Dr. James Seaver who wrote her original memoir (she could not write). With Seaver, Jemison constructed one of the most comprehensive accounts of a white captive. In 1825, when the Seneca were forced to sell their land to the white settlers, Jemison and her daughters remained on the land. But very soon she missed living close to the people with whom she had spent most of her life. In 1831, her family she sold their belongings and moved to the Indian reservation at Buffalo Creek where she obtained a small farm. She died there in 1833.

In 1874, she was reburied closer to her former home along the Genesee. In 1910, a statue was erected in bronze, slightly larger than life-size, in which she is carrying her baby on her back (probably Thomas during the time they traveled along the Genesee). Another statue was erected by a Catholic priest in 1923, near the place she was captured. Since her original biography, 22 editions of her narrative were written.