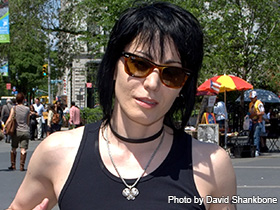 A pioneer in punk rock and one of the major female rockers, Joan Jett (and her Blackhearts) had a big mainstream hit, I Love Rock 'N' Roll.

Born in Lansdowne, Pennsylvania, in 1958, Joan Jett is known for breaking the music industry gender barrier during the rise of punk rock. After appealing mostly to audiences overseas as part of the band The Runaways, Jett formed her own group, The Blackhearts, with the help of longtime friend and producer Kenny Laguna. With The Blackhearts, Jett created hits, including "I Love Rock 'N' Roll" and "Crimson and Clover." Jett continues to produce and tour with The Blackhearts and also dedicates her time to signing other musicians to her production company, Blackheart Records.

Joan Marie Larkin was born on September 22, 1958, at Lankenau Hospital in Wynnewood, Pennsylvania. Although she only lived in the Philadelphia area for about a year, Larkin remained a resident of Pennsylvania, moving to places including Pittsburgh and Erie with her parents and younger brother and sister. Since her father worked for an insurance company that required him to move to different cities when needed, Larkin's family never really settled down in a particular place. As a child Larkin showed interest primarily in sports and the outdoors, playing anything she could outside with the neighborhood kids.

At the age of 12, Larkin's family moved to Los Angeles, California. Within the next couple of years, teenage Larkin started paying more attention to the radio and developed an interest for drama through her classes in school. As part of the school chorus, Larkin never had a leading role because she was too shy to be in the spotlight. Shortly after moving to Los Angeles, Larkin's parents divorced and her last name changed to her mother's maiden name: Jett. Having developed a heightened interest in music, Jett began playing the guitar. Her main music interest was rock 'n' roll of the glitter band version, especially the new music developing out of England at the time.

While she taught herself to play the guitar, Jett decided there must be other girls in the Los Angeles area with similar music dreams and started putting a band together. By age 15, Jett created The Runaways with Lita Ford, Cherie Currie, Kari Krome, and Sandy West. Jett sang lead vocals for the band, played rhythm guitar, and also wrote many of The Runaway's songs. After seeing the band perform, Kim Fowley became the band's manager and got them a record deal with Mercury Records. Although they made three albums, the band garnered little popularity in the United States, but made a much bigger impression in Japan and in Europe. Due in part to their inability to attract attention in the male-dominated American music industry, The Runaways eventually split up in 1980 and the girls went their separate ways; Jett traveled to England to jumpstart a solo career.

While in England, Jett collaborated with former members of the Sex Pistols to make three songs, two of which were made into singles in Holland. Jett returned to Los Angeles to produce a record for a local punk rock group, the Germs, and also starred in a film about her former group The Runaways. Although the movie was never released, it provided the opportunity for Jett to meet Kenny Laguna, an independent producer. Jett's manager approached Laguna to help write songs for her solo album. During the production of the album, Jett experienced problems with her manager and decided to find another, a task Laguna helped her with. After hearing from an interested manager, Jett flew to New York where Laguna lived. When the potential manager changed his mind, however, Jett ended up in a new town without one. With no luck finding a manager, Jett and Laguna completed her first album with the help of Ritchie Cordell, another music producer, and released Joan Jett in Europe only. The album was rejected by 23 labels in the United States. After their rejection, the duo decided to create their own label, Blackheart Records, and released the album independently. Using their own savings, Jett and Laguna created a system of independent distributors and pressed the records themselves. Although the team could not keep up with the increasing demand for Jett's solo album, there still were no interested American record companies. After the record sold well for some time, the owner of Boardwalk Records, Neil Bogart, gave Joan Jett a record deal. Her album was re-released under the title Bad Reputation in 1981 and climbed the American record charts eventually reaching number 51.

Following the moderate success of her first album, Joan formed a new group, The Blackhearts, which included bass player Gary Ryan, guitarist Eric Abel who was quickly replaced by Rick Byrd, and drummer Lee Crystal. The group toured for a year and then released their first record I Love Rock 'N' Roll. Reaction to the new album was immediate and soon it broke into the Top Five. The hit single "I Love Rock 'N' Roll" went to the very top of the Billboard charts on March 20, 1982, and remained the number one song in America for seven weeks. With this album Joan Jett had finally broken the gender barrier of the music industry and made a name for herself. Other singles from the album, including a remake of the 1950s classic "Crimson and Clover" and "Do You Wanna Touch Me (Oh Yeah)," made it into the top of the charts. Joan Jett and The Blackhearts' next record, Album, released in 1983, went gold but failed to produce any hits as popular as those on the previous album.

Although without another hit song for a few years, Jett continued her musical work, creating more albums including Glorious Results of a Misspent Youth. She also made another attempt at an acting career, starring with Michael J. Fox in Paul Shrader's 1987 work, Light of Day. Following the film, Jett's next album, Up Your Alley, achieved platinum status and the single "I Hate Myself for Loving You" soared to number eight on the charts. Despite the album's success, Jett's career once again hit a low. Her next album, the all-covers record The Hit List, only reached 36 on the charts and 1991's Notorious failed to appear at all.

During the early '90s a new generation of female rockers began to appear, claiming Joan Jett and The Runaways as influences. According to VH1, Jett had become "a figurehead for several generations of female rockers." With the public's eye on the female rock industry, Jett's next album Pure and Simple, released in 1994, received more attention and popularity than most of her albums released following the mid-'80s. Jett also began working with The Gits in 1995 after their lead singer, Mia Zapata, was raped and murdered. While she recorded a live album with the surviving members titled Evil Stig, she also supported the hunt for Zapata's killer, a hunt which went cold for 10 years until DNA identified Jesus Mezquia in 2003 as Zapata's killer. He was charged with first-degree murder and sentenced to 37 years in prison.

In 1999, Jett and the Blackhearts released another record, Fetish. Jett continued broadening her horizons, appearing in the Broadway version of The Rocky Horror Picture Show in 2000 as the character Colombia. The year 2001 led to another film attempt, this time an independent flick titled By Hook or Crook which received great reviews despite very little advertisement and promotion.

In recent years, Jett continues producing her own music; however, she and the Blackhearts have moved from Jett's label to Warner Brothers. Jett and Kenny Laguna still operate Blackheart Records to afford new bands a fighting chance in the music industry. The label has produced The Vacancies, a punk rock group out of Cleveland whose album A Beat Missing or a Silence Added broke the Top 20 on college charts. Another group, The Eyeliners, also found success with Blackheart Records. Jett continues to sign contracts with musicians in whom she has faith to make it in the industry. Her support of other musicians does not hinder her and The Blackhearts from their own work, however, the group released another album, Sinner, in 2006 and played in the Van's Warped Tour that same year. Following the Warped Tour the band started their fall headline tour and appeared on television shows, including The Tonight Show with Jay Leno and The Ellen DeGeneres Show.

Joan Jett was inducted into the Long Island Music Hall of Fame in 2006. The presenter of her award, radio station program manager Bob Buchmann, called her "the original punk rocker." Jett continues to support Home Alive, a Seattle-based anti-violence organization founded by Zapata's community of musicians after her murder. Jett is also an animal rights activist, working with groups including People for the Ethical Treatment of Animals (PETA). She appears on The Learning Channel's commercial for its series American Chopper and has her own radio show Joan Jett's Radio Revolution on Little Steven's Underground Garage on Sirius Satellite Radio. Joan Jett & the Blackhearts continue to perform, with tour dates scheduled through July 2015.