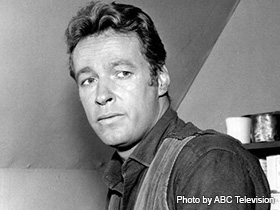 Ashley native Russell Johnson is best known for his role as The Professor on the 1960s classic sit-com Gilligan's Island.

Russell David Johnson was born in 1924 in Ashley, Pennsylvania. He joined the army as an air cadet after graduating high school and participated in a total of 44 missions throughout World War II. After the war, he took advantage of the Servicemen's Readjustment Act of 1944 (i.e. GI Bill) to pay for acting school. He acted in many second rate movies and TV shows throughout his early career until he was given his signature role of The Professor on Gilligan's Island. He eventually retired to Bainbridge Island, Washington, where he died in 2014.

Actor Russell David Johnson was born on November 10, 1924, in Ashley, Pennsylvania. As a youth Johnson received poor grades and was held back a year to catch up with his studies. When he was eight, his father passed away and he and his brothers were sent to Girard College in Philadelphia, a school that provides education and board for orphaned children and children from financially stressed families. His grades remained below average until he entered high school and started to take his studies seriously. Throughout high school he worked hard and earned admission to the National Honor Society.

After high school, in the midst of the Second World War, Johnson joined the United States Army as an aviation cadet. During the War, he rose to the rank of First Lieutenant, under the service number 765 497. He flew as bombardier in a total of 44 combat missions in a B-25 aircraft over the Netherlands, The East Indies, and the Philippines. According to the Internet Movie Database (IMDb) biography on Johnson, his World War II decorations included the Bronze Star, Air Medal with Oak Leaf Cluster, Purple Heart, Good Conduct Medal, Asiatic-Pacific Campaign Medal with three service stars, Philippine Liberation Ribbon with one service star, and the World War II Victory Medal with Honorable Service Lapel Button. He earned the Purple Heart for the injuries he sustained when the B-24 Liberator bomber on which he was a crewman was shot down during a bombing run against Japanese targets in the Philippine Islands in March of 1945.

After the war, Johnson served as a Reserve Officer off and on until 1957. During this period he took advantage of the Servicemen's Readjustment Act of 1944 (also known as the GI Bill) to fund his acting studies at the Actors Lab in Hollywood. While in school, he met Kay Levey, an actress, and they married on July 23, 1949.

Johnson made his acting debut in 1952 in the movie For Men Only, in which he played a villain. Throughout the next 12 years he appeared in many movies including, The Attack of the Crab Monsters, This Island Earth, It Came From Outer Space, and Law and Order with Ronald Reagan, and appeared on numerous television shows including two appearances on the hit TV show The Twilight Zone. The majority of the TV shows and movies he appeared in were Westerns and Science Fiction. After completing 49 episodes of the TV western Black Saddle, he told an interviewer for the Scranton Times-Tribune that "I'm not partial to the American West, by any means. It doesn't interest me, and I never watch westerns on TV. I prefer almost any other type of show, especially a series dealing with extra-sensory perception, like 'Twilight Zone,' or one about medicine."

In 1963, Johnson auditioned for the role of The Professor in the sitcom Gilligan's Island that was scheduled to air on CBS. Johnson did well in the interview, in spite of the fact that he refused to take his shirt off. Johnson was selected to fill the role and the first season of Gilligan's Island aired in 1964 in the Saturday evening timeslot on CBS and received good reviews. Little did he know that this show would be his biggest claim to fame.

His character on the show, The Professor (Dr. Roy Hinkley), was a well-educated high school science teacher from Cleveland, Ohio. The Professor had six degrees, including a BA from USC, a BS from UCLA, an MA from SMU, and a PhD from TCU. Additionally, he was an expert in fixing or building almost anything one could think of from materials found on the island. For example, when a meteorite landed on the Island, The Professor built a Geiger counter out of bamboo to measure the radiation from the foreign object. Frazier Moore noted that "Russell would joke years later, the one thing The Professor never accomplished was figuring out how to patch the hole in the bottom of the S.S. Minnow so the group could get back to civilization."

Johnson enjoyed his role; however, he was displeased that throughout the first season the Professor's and Mary Anne's names were not included in the theme song. The song, which ended with the names of the castaways, said "and the rest," instead of saying "the Professor and Mary Ann." This produced tension between him and the producers until Bob Denver (Gilligan) approached the producers and demanded that either the names be added to the song or his name be removed from the song as well (he had contract rights to decide where his name was in the credits).

The second and third seasons of the show both did fairly well and it appeared that the show would stay in production. However, in 1966, after the airing of the third season, the show was canceled due to scheduling conflicts with the hit show Gunsmoke. This abrupt end surprised the cast and left the castaways stranded on the island. The show ran for a total of 96 episodes.

In the subsequent years, Johnson continued appearing in movies and television. He appeared twice on the hit shows Gunsmoke and later Dynasty. From 1978 to 1981, Johnson appeared in three made for TV movies that were based on Gilligan's Island. The first of these, Rescue from Gilligan's Island, finally resulted in the rescue of the castaways from the island and did well in the ratings. The second movie had the castaways being rescued a second time and Mr. Howell building a resort on the island. The third movie had the Harlem Globetrotters visiting the resort, and all of the castaways as employees.

Unfortunately, on January 20, 1980, Johnson's wife, Kay, passed away leaving him to take care of their two children, Kim and David Johnson. On May 18, 1982, Johnson married Constance Dane, a former actress.

For the next 15 years, Johnson continued appearing in movies and on TV shows, including spots on Entertainment Tonight and the Tonight Show. In the early 1990s he became very active in AIDS research funding when his son, David was diagnosed with AIDS. In 1994, his son passed away as a result of complications from AIDS. His daughter has followed in her father's footsteps as an actress.

Mr. and Mrs. Johnson retired to Bainbridge Island near Seattle, Washington. Johnson had told a reporter in 1993: "We didn't intentionally set out to move to an island. We'd lived in Los Angeles for 40 years and just wanted to get away from the heat, the smog and crowds." Johnson passed away of natural causes on January 16, 2014, in his Washington home. Upon his death, Gilligan's Island co-star Dawn Wells (MaryAnn Summers) said "Russell was a true gentleman, a dear friend with a fantastic wit, and a wonderful actor."