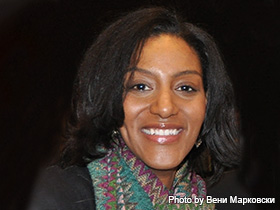 Sarah Jones was born in 1974 in Baltimore, Maryland, and since has become a successful poet, actress, playwright, and women's rights activist. Jones came onto the hip-hop poetry scene in 1999 with her poem, "Your Revolution," after spending two years at Bryn Mawr College. Since then she has written and performed several solo shows including Bridge & Tunnel, for which she received a Tony Award. Through these shows, Jones expressed her views on political issues and promoted activism. Jones continues to develop new material for shows and began working on a television project in 2014.

Born on November 29, 1974, in Baltimore, Maryland, playwright and actress Sarah Jones was born into a mixed-race family with an African American father and a European-Caribbean mother. Jones' parents were both medical doctors, with her father providing medical care in the military. Her father's career path moved the Jones family all over the East Coast and eventually to Queens, New York. At the United Nations High School, Jones laid the foundation for her career and became cognizant of and interested in all of the diversity that she was surrounded by every day. Jones started to pick up on the accents and unique mannerisms of those around her and would often entertain her peers with impressions of these various accents. Jones spoke out about her feelings toward diversity to Kai Wright of The Progressive saying, What a terrible thing that we've been conditioned to immediately respond to certain people's accents as demeaning or embarrassing."

After graduating from high school, Sarah Jones joined the Bryn Mawr College class of 1995 in Bryn Mawr, Montgomery County. Jones was studying to become a lawyer, but during her sophomore year financial hardship and her parents' divorce forced her to abandon her studies. Jones then returned to Brooklyn's Fort Greene neighborhood and began to dabble in hip-hop poetry. This type of poetry is unique in its use of improvisation and hybrid language. In 1997, Jones began working on hip-hop poetry that offered messages counter to those of the hip-hop music of the time. As Jones explained to Jennifer Block of Ms. Magazine, I was aimless, wandering through my days, attending hip-hop parties. I found myself singing....about bitches and ho's.... I found myself doing that and said, 'Wait a minute.' Jones performed her hip-hop poems at several cafes, including the Nuyorican Caf?? where she recited her original poetry in competition with several other poets to win the Grand Slam Championship. So early in her career, this was a great achievement. In an interview with Martha Hostetter of American Theatre, Jones said, These events were like a pressure-cooker, and really accelerated my creative process. I've always been something of a ham, mimicking people's voices. But I had never taken any of that seriously."

Rather than using content based on the objectification of women, Jones focused her hip-hop poetry on subjects such as abstinence and female independence and worth. One of the results of this time of experimentation was Jones' hip-hop poem "Your Revolution," which sparked great controversy upon its debut in 1997. One verse reads:

your revolution won't knock me up and produce lil' future MCs because that revolution will not happen between these thighs.

The Federal Communications Commission (FCC) tried to ban the poem from being played on radio stations due to its "inappropriate" content. Jones saw this as being an unfair attempt to keep her political views from being heard and to deny her right to free speech. Because of this, Jones became the first artist to sue the FCC for censorship in 2001. In an interview with Joshua Wolf Shenk of Mother Jones, Jones said, "Suing the FCC was important because what they were doing with my song was representative of the larger abuses of power....This is an agency established to protect the public interest which instead has become the biggest champion of the consolidation of media in history." The case was completed in 2003 with a verdict in favor of Jones.

"Your Revolution" eventually evolved into monologues that would lead Jones to complete her first one-woman show. After doing much research and "people-watching," Sarah Jones created the characters for her first show, Surface Transit. As Jones told Martha Hostetter of American Theatre, It was about paying attention, trying to give each character the nuance and dignity that I would want if someone were portraying me. Throughout the show, Jones transformed herself into several New York residents with diverse personalities and backgrounds, including an elderly Jewish woman and a Russian widow. The underlying theme of the performance was diversity and the celebration of individuality. The characters in this show were based on the personalities of the diverse individuals from the neighborhood in Queens where she grew up.

Surface Transit was completed in 1998 and tickets sold out quickly. Shortly after, women's rights activist Gloria Steinem brought Jones together with the women's organization Equality NOW to receive a commission to write another show. Women Can't Wait! was Jones' second show and was performed at the U.N. International Conference on Women's Rights in 2000. This show centered on eight women from different areas of the world each of whom were being suppressed by laws that restricted their rights for no reason other than their gender. Pamela Shifman, co-executive director of Equality NOW, told Jennifer Block in an interview for Ms. Magazine, "Sarah gets it....We never would have gotten this much publicity for our campaign without this performance." While Jones had been introduced to the LGBT community and feminist groups during her time at Bryn Mawr College, this commission got her actively involved in women's rights activism.

Shortly after completing her performance for Equality NOW, Jones received another commission from the National Immigration Forum to write a show about the immigrant experience in America. This resulted in her third solo show, 2002's Waking the American Dream. In Waking the American Dream, Sarah Jones transformed herself into ten immigrants who share their stories through poetry and discuss important issues like the identity struggle of immigrants and their feelings on the concept of freedom.

Jones completed Waking the American Dream and began working on her next show. Bridge & Tunnel has been one of Jones' most popular shows and was performed Off-Broadway in 2004 and later produced on Broadway with the help of actress Meryl Streep in 2006. The characters in this show were far more diverse than in any other show Jones had ever written. Included in this performance were men, women, gays, biracial couples, and people of all different ethnic backgrounds. Sarah Jones leads the audience through different parts of the world through the stories of her characters who range from a Pakistani accountant to a New York DJ. Jones concludes the performance with a poetry slam that brings together the ideas of diversity and acceptance.

For this show, Jones won a Special Tony Award and approval from her audiences. Margo Jefferson of The New York Times acknowledged "the uncanny accuracy with which she portray[ed] the host of immigrants and outsiders who make up this hybrid nation." Meryl Streep assisted with the production of the show and was very pleased with the final product. When Bridge & Tunnel premiered, Streep noted that it was "the most authentic New York offering...on Broadway."

Jones' next commission came from the W.K. Kellogg Foundation to create a performance which examined the issues of racial and economic inequalities in health care. Jones produced a show that included several culturally diverse characters who demonstrated the fault in our health care system from an ethnic and cultural perspective. A Right to Care was completed in 2005 as a result of this commission, and critics made it clear that Jones' had perfected her style in combining politics with art and humor.

Sarah Jones lives on her own in New York after five years of marriage to her former husband, Steve Colman. Jones travels to universities all over the country doing character development workshops. She continues to research and "people-watch" to find inspiration for new characters. As of 2014, Jones was working on a commission for the Lincoln Center for an unspecified show and developing a television project based on the characters from her shows and performances. Jones is also acting as a spokeswoman for United Nations International Children's Emergency Fund (UNICEF) in its campaign to raise awareness about and end violence against children.