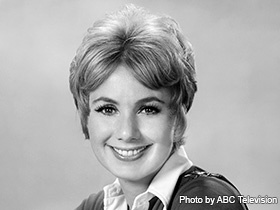 Famed as the mother of TV's Partridge Family, actress Shirley Jones was born in Charleroi.

Shirley Mae Jones was born in Charleroi, Pennsylvania in 1934. She achieved the title of Miss Pittsburgh before going on to New York, where she landed a contract with Rodgers and Hammerstein at her first audition. Starring roles in the film versions of Oklahoma! and Carousel led to an affluent movie and television career. Jones even won an Oscar for her performance in Elmer Gantry. In the seventies, her career was reborn with the role of Shirley Partridge on The Partridge Family. Her marriage to actor Jack Cassidy ended soon after the show was cancelled, and she soon remarried comic Marty Ingels. Jones has remained an active performer of stage and screen to this day, and embodies the Cinderella story of a small town girl who has made it big.

Shirley Mae Jones was born in the small town of Charleroi, Pennsylvania, the only child of Paul and Marjorie Jones on March 31, 1934. At the age of three, the Jones family moved a few miles away to Smithton, another small town of less than 500 along the Allegheny River where her grandfather, William B. Jones, owned both the Jones Brewery and the Jones Hotel. Her talents as a singer manifested themselves early, as Shirley became the youngest member of her town's Methodist choir at the age of six. During the summer, Jones went to a camp on Lake Erie where she eagerly participated in the camp's musical productions. It was there, at age 11, that a camp counselor recognized Jones's potential for success and urged her parents to sign her up for piano and voice lessons. By the next year, her father was driving her to Pittsburgh twice a week to study voice under the music critic for the Pittsburgh Press, Ralph Lewando.

In 1952, Jones graduated from South Huntingdon High. That same year, she was spotted sunbathing by a scout photographer for the Miss Pittsburgh pageant. Jones went on to win the title of Miss Pittsburgh at the age of eighteen and the title of runner-up in the Miss Pennsylvania competition, along with a scholarship to the Pittsburgh Playhouse's drama school. Jones planned to continue on to two years of junior college in New Jersey with the hopes of becoming a veterinarian. However, a trip to New York and a chorus girl audition would prevent her from ever reaching New Jersey. While in New York, Jones went to an open audition for the chorus of the Rodgers and Hammerstein show South Pacific. She only had to sing a couple songs for Richard Rodgers himself before the rest of auditions were cancelled, and she was taken to the St. James Theatre to meet and sing with Oscar Hammerstein and the full City Center Orchestra. Jones was given a chorus part in South Pacific, and later a small role in another of their shows, Me and Juliet.

Jones was unaware that she was actually the famous duo's longshot candidate for the role of Laurey in the upcoming film adaptation of their musical Oklahoma! and by 1954, she was flying to Hollywood to test for the role. She accepted the part and went on to shoot the classic musical, which was also the first film experimentation with the wide screen process of Todd-AO, a precursor to the later days of Cinerama. She worked alongside such film greats as director Fred Zinnemann, and famed actors Gordon MacRae, Gloria Grahame, Rod Steiger, and Charlotte Greenwood who would help mentor her blossoming career. The movie was a success and went on to win two Oscars and garner three more nominations. Jones went on to star in the stage version of Oklahoma! in Europe opposite her future husband, Jack Cassidy.

When Jones first met Jack, he was eight years her senior and married, but no longer living with his wife, Evelyn Ward. They flew to Paris with the show, and their relationship and romance grew. Jack wined and dined Jones in the restaurant atop the Eiffel tower where she enjoyed her first tastes of champagne and escargot. That same night he told her, "I'm going to marry you," to which she simply replied, "You're already married." The show moved on to Rome, and all Jones had was the clich?? promise that he would get a divorce when they returned to the States. The tour ended and Jones returned home to film her next project. They were separated for three months, keeping in touch with one another through lengthy letters and telephone calls. After three months, Jack knocked on her door to announce his divorce was final and they were married in the August of 1956.

Following her success on both stage and screen, Jones went on to star in many more films including another Rodgers and Hammerstein classic, Carousel, once again opposite the talented Gordon MacRae. She played the role of Julie Jordan, a millworker who falls in love with a carousel barker who is never able to escape his inner demons and past disgressions. Even though the musical dealt with darker themes and strayed away from a clean and happy ending, the music and story held a special place in Jones heart and have remained there. To this day, she ends all her concerts with one of the movie's most memorable songs, "You'll Never Walk Alone." After Carousel, she proceeded to star in several smaller scale musical comedies outside of the realm of Rodgers and Hammerstein, such as April Love, opposite Pat Boone, and Never Steal Anything Small, in which she starred opposite the famous James Cagney. However, Jones was growing frustrated with being typecast, and had difficulty breaking out of the industry's perception of her as "that musical girl."

She achieved her breakthrough, though, with her Oscar-winning portrayal of the prostitute, Lulu Baines, in Richard Brooks' film Elmer Gantry. The film was an adaptation of the controversial Sinclair Lewis novel and follows the story of a salesman who works with an evangelist to sell religion to America. However, the role did not come easy as Brooks originally could not visualize Jones in the role. He remained quiet during their initial interview, but at one point asked "What makes you think you could play this kind of role?" Jones response was simply, "I'm an actress. I'd be able to act it." Brooks begrudgingly gave Jones the role, but showed his disapproval by offering no direction to Jones on her first day of shooting, which also happened to be the most challenging scene. It is during this scene in the whorehouse that Jones speaks her shocking yet famous line, "He took me behind the pulpit and rammed the fear of God into me so hard and so fast I never heard my old man's footsteps." Jones returned home in tears, fearing the resentment of her director. That night, though, after viewing the dailies, Brooks called Jones to apologize and told her that she "might wind up being the best thing in the picture." The public agreed as her performance opposite Burt Lancaster won her the Oscar for Best Actress in a Supporting Role and would be the only purely dramatic role in her career.

Both Jones' career experience and family were growing. With movies such as The Music Man, The Courtship of Eddie's Father, and Bedtime Story under her belt, Jones gave birth to three sons, Shaun, Patrick, and Ryan. In 1969, Jones was nominated for an Emmy for Outstanding Single Performance by an Actress in a Leading Role in the television movie Silent Night, Lonely Night, during which she also shot her first nude scene. The seventies would bring a new career boost to Jones with the arrival of The Partridge Family. From 1970-1973, she played the role of Shirley Jones, single mother of a family band. The role of her oldest son, Keith Partridge, was played by her stepson, David Cassidy who would achieve teen idol status. Their song, "I Think I Love You," went to number one on the Billboard charts. Sadly, the booming careers of Jack Cassidy's wife and son put added stress on the already strained marriage. They had become different people. Cassidy was never able to cope with living in the shadow of his wife and in 1974, they were divorced. It did not take Jones long to bounce back, and on December 18 of that same year, she was going on her first date with future husband and comic, Marty Ingels. Sadly, Cassidy was not as fortunate and passed away on December 12, 1976 in a tragic fire accident.

Following her success on The Partridge Family, Jones landed the self-titled sitcom entitled Shirley, which ran one season and several made-for-television movies. She married Ingels on November 13, 1977 and the two have remained together ever since. In the '80s and '90s, she appeared on such shows as Love Boat, Melrose Place and Murder She Wrote and moved onto movies with more serious themes. For example, her film Last Cry for Help dealt with teen suicide and And There Were Times, Dear, dealt with the dilemma of fighting Alzheimer's disease. On February 14, 1986, Jones was awarded star number 1822 on the Hollywood Walk of Fame at 1541 Vine Street. Her most recent successes include the role of Grace in the hit comedy, Grandma's Boy, and a nomination for her performance in the Hallmark movie Hidden Places in 2006. She continues to perform concerts and act in stage musicals including the role of Cousin Nettie in a recent production of Carousel.