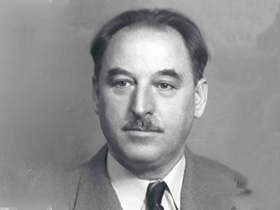 Silver Star-winner Captain Will Judy published numerous books on dogs and their care as well as founding National Dog Week.

Dog Fancier Will Judy was born in rural Somerset County in 1891. Beginning a life-long attachment to Juniata College, he earned his bachelor's degree there in 1911. Following heroic service in World War I, Captain Will Judy returned to the States and took up the practice of law. He became a book publisher in 1921 and a magazine publisher in 1923 when he bought Dog World. He continued his highly-esteemed involvement with the world of show dogs and obedience training for the rest of his life, retiring in 1960. Will Judy died in Chicago in 1973.

William Lewis Judy, known through much of his life as "Captain Will Judy," was born in Garrett, Pennsylvania on September 20, 1891. He was the son of a farming couple in rural Somerset County: Jerome and Barbara Judy. After graduating from high school, Judy attended Juniata College in Huntingdon, earning his ABdegree in 1911. He then earned his law degree at Hamilton College of Law in 1915. Shortly thereafter, Judy joined the USArmy in World War I, rising through the ranks to become a Captain and earning the Silver Star for "gallantry in action."

Following the Great War, Judy held a series of jobs in varying professions, including the practice of law in Chicago, the city that became his home for the rest of his life. In the booming post-War period, Judy founded his own publishing house in 1921, the venue for numerous publications, ranging from his war diary, to essays, and poems, some of which were published under the pseudonym Wymar Port. He mostly wrote factual materials on what became his life's passion: dogs. Among his works in the realm of dog fancy were a standard reference work, The Dog Encyclopedia, and several frequently revised and updated works on dog shows, breeding and training dogs, and various breeds. In 1923 he added the task of magazine publisher to that of publishing house manager when he purchased Dog World magazine. That publication would become, according to Dog World's memorial article to Judy on the 75 th anniversary of National Dog Week, the largest dog publication in the world. During the course of his involvement with the dog world, he helped to create the Dog Writers Association of America and served as its president, as well as the creation of National Dog Week in 1928. He earned the respect of those in the field, being honored as the Outstanding Personage in the dog world with the 1936 Ellie Sheets Memorial Trophy and the 1949 Man of the Year prize from Gaines Dog Food.

Upon his retirement at age 67 from the dog world and his publishing company, Will Judy endowed a lectureship fund in 1958 at Juniata College to bring great minds in education, science and other fields to central Pennsylvania, such as poets Stanley Kunitz and John Ciardi and social reformer Ralph Nader. He had maintained a lifelong love of Juniata College, serving as the president of its National Alumni Association in 1940 and as a member of the Board of Trustees of the College beginning in 1948. In 1960 he turned National Dog Week over to the Pet Food Institute; the celebration is now run by the American Dog Owners Association.

Will Judy died at the age of 82 on December 27, 1973, in Chicago. At Judy's passing, Juniata College said it "lost a most faithful and generous friend." Dog World magazine called him "an icon in the sport" of dog shows. Many dog breeders speak proudly to this day of winning the Will Judy Award, the distinction given to dogs who earn at least 195 out of 200 points at three high level obedience competitions during a single season.

Works written as "Will Judy:"