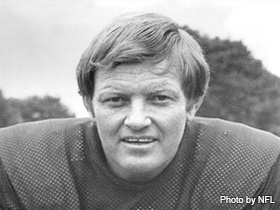 Born in 1934, Christian Adolph Jurgensen, better known as Sonny, was a quarterback who won games with his arm. Sonny was a drop back passer that illustrated what a quarterback was meant to be. He was referred to as the best quarterback the National Football League (NFL) has seen, as told by Vince Lombardi, who was perhaps the best coach in NFL history. Playing 18 years in the NFL, seven with the Philadelphia Eagles and eleven with the Washington Redskins, Jurgensen set many records. After his career, he stayed with the sport and became an announcer. In 1983, Jurgensen earned his spot in the NFL Hall of Fame.

Christian Adolph Jurgensen, better known as Sonny, was born on August 23, 1934. He grew up outside of Wilmington, North Carolina, where he attended New Hanover High School. At the age of 23, he graduated from Duke University, where he was quarterback on the football team. Sonny led the Duke Blue Devils to two ACC championships as well as the 1954 Orange Bowl championship. He made such an impression on Duke University that they dubbed September 1st as "Sonny Jurgensen Day." His graduation from Duke in 1957 did not mean graduating from football, and Sonny went into the National Football League Draft.

The 1957 NFL Draft brought the spry quarterback from Duke to the Philadelphia Eagles. For the first three years on the Eagles, Jurgensen was forced to take a back seat to Norm Van Brocklin. Brocklin led the team until Jurgensen took over the position under center in 1961. Jurgensen brought the Eagles to a 10-4 season, and stunned the NFL with his efficiency. Jurgensen had 3,723 yards passing through 235 completions and 32 of them for touchdowns. These numbers led the NFL, subsequently giving him All-NFL honors. Regardless of his instant gratification at quarterback, the Eagles as a franchise were not where the front office wanted them to be, and Jurgensen was traded to Washington Redskins in 1964.

Even though Sonny Jurgensen began his NFL career in Philadelphia, he is perhaps best known for his time in Washington. Jurgensen was part of the NFL's best passing offense with the Redskins, and would accumulate many NFL passing titles. The success of his quarterbacking skills is believed to have attributed to his passing style. Jurgensen was what was known as a drop back passer. He was not mobile, but was an accurate and powerful passer. Sonny is quoted as saying "All I ask of my blockers is four seconds...I beat people by throwing, not running."

After five years in the Redskins organization, a task-oriented head coach was brought in. Vince Lombardi was hired as head coach, and his coaching style contradicted with Jurgensen's upbeat quarterbacking. Jurgensen had talent, but he also had a lot of fun during practices and training. The Lombardi-Jurgensen relationship was not a problem though--the two hit it off immediately. Lombardi claimed that "[Jurgensen] may be the best the league has ever seen. He is the best I have ever seen." The relationship was mutual, as Jurgensen claimed that he "learned more in five days from [Lombardi] than I had in twelve years in the NFL." Heartbreaking to the country, the NFL, and Sonny, Lombardi passed away in 1970.

The Redskins brought in George Allen to become head coach. Like Lombardi, his coaching style was completely different than Jurgensen's playing style; he was defensive-minded. However, this time Jurgensen and the coach did not mesh very well. The playing philosophies, coupled with injuries that Sonny experienced, began to limit his playing time. Sonny Jurgensen finally retired from football after the 1974 season. He completed seven seasons with the Eagles, and eleven with the Redskins. No member of the Redskins has worn his number, 9, since he retired.

Sonny Jurgensen left his mark on football. Jurgensen received three NFL passing crowns and was elected to the pro bowl five times. His career passer rating was an 82.6. In 1983, nine years after he retired, Sonny received his spot in Canton, OH at the NFL Hall of Fame. Throughout his career he passed for over 32,000 yards and 255 touchdowns. Jurgensen ranks sixth all time for passing yards (9,639) and touchdown passes (76) in Eagles history.

Retiring from football did not mean that Sonny left the sport. The year following his retirement, Jurgensen became a commentator for CBS. After the endeavors on the television, Jurgensen moved back to the team he retired with and began announcing Redskins games on the radio. Sonny Jurgensen can be found today in Mount Vernon, Virginia, fewer than 20 miles from where he finished his career with the Redskins.