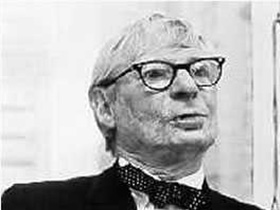 Noted architect Louis Kahn taught at the University of Pennsylvania.

Louis I. Kahn was born February 20, 1901, in Saarema, Estonia. At the age of five, he and his family immigrated to Philadelphia, Pennsylvania. When he was older, he studied architecture at the University of Pennsylvania and later became a professor. While doing this, he designed and constructed many buildings, some of which still stand today. Throughout his career as an architect, he earned many awards and honors. He died March 17, 1974, in New York, New York.

The future world-renowned architect Louis I. Kahn was born February 20, 1901. He was born on the Estonian island of Saarema (then called ??sel). Kahn was the oldest of three children, his sister Sara and his brother Oscar, all born to Jewish parents, Leopold and Bertha. Leopold met his wife while in the Russian army. Later, he became a copyist and stained glass craftsman, though his jobs were not steady. His mother worked as a seamstress in a sweatshop to support the family.

The family came to Philadelphia, Pennsylvania, only a few years later in 1906 because of his father's fear of being called back to the Russian army to serve in the Russo-Japanese War. Later on in his life, Kahn's parents knew he would be an artistic person. At age 12, Kahn attended the Fleischer School of Art in Philadelphia and spent much of his time there painting. Later, he attended Philadelphia Central High School. While there, he focused many of his classes on the arts. This is where Kahn would get his first taste of architecture. He studied under William F. Gray, a former architectural critic. After graduating Philadelphia Central High School, he entered the architecture program at the University of Pennsylvania in 1920 with a full palette of architectural knowledge ready to be used.

At the University of Pennsylvania, Kahn was trained under Paul P. Cret, a well-respected architect. Cret was educated in the Beaux-Arts tradition, the classical architecture style, and passed this on to his students. While attending school at the University of Pennsylvania, Kahn had jobs to further his architectural knowledge. He held a job as a draftsman in 1921 in the offices of Hoffman-Henon Company, and then in the following year, 1922, he worked for Hewitt & Ash. In 1924, Louis Kahn graduated from the architectural program. During his senior year of college, he also received the bronze Arthur Spayd Brooke Memorial Prize medal for architectural design.

After his graduation, Kahn went on to undertake many responsibilities and dreams. He applied his training in the Beaux-Arts tradition and International Style (modernism) of architecture in the future work he would take on. He first began by working with architect John Molitor on the Sesquicentennial Buildings project in Philadelphia. After this, he worked with William H. Lee, an architect who specifically worked on theater design. After these endeavors, Kahn took a journey to Europe to study the architecture, specifically ancient. The ancient architecture he observed in Europe would later influence the designs of the buildings he would create. Kahn thought the architecture being produced in America was lacking in the "monumental and spiritual qualities of ancient buildings."

When Kahn returned from Europe, he worked with his former professor, Paul Cret. After this, he would collaborate and work with many different architects; however, he had a hard time keeping a job and making money because of the Great Depression. During his time in and out of work, he met his wife Esther Israeli, who at the time was working as a research assistant at the University of Pennsylvania. In 1935, they had a daughter, Sue Ann. Though Kahn was married to Esther, he did have two affairs with two women he worked with, Anne Tyng (architect) and Harriet Patterson (landscape architect). With Anne, he had a daughter in 1954, Alexandra, and with Harriet, he had a son, Nathaniel, in 1962.

During his life, Kahn focused a lot of his time on public housing and the living conditions in Philadelphia. He joined the Public Works Administration and the Architectural Research Group to discuss the living situations in Philadelphia. Two important people he collaborated with in this group were George Howe and Oskar Stonorov. Within these groups, he worked with them and other architects to create new projects for the Philadelphia Housing Society, such as Carver Court in Coatesville, Pennsylvania, a region outside of the Philadelphia area, and Philadelphia's Mill Creek Housing project, which has since been demolished. Kahn felt strongly about providing help and shelter for people in the Philadelphia region through designing and building better housing. He believed that improving the city's housing was like treating a living organism, and if something went wrong over time, the organism would begin to die.

While teaching, many of Kahn's greatest architectural ideas were conceived and erected. Kahn was always concerned with the emotional expression in his ideas. He wanted to reflect the ancient ruins of Europe in a modern way in the buildings he shaped. Kahn's buildings often used geometric forms of brick and concrete. In many of Kahn's buildings, he practiced his theory of silence and light. Kahn believed light was a tool or means of expression and silence was the drive for expression, and with the meeting of both, a work of art was formed. Kahn used light in many of his buildings, such as the Jonas Salk Institute for Biological Studies, the Kimbell Art Museum, and Erdman Hall Dormitories at Bryn Mawr College. Kahn also went abroad and designed the Indian Institute of Management in Ahmedabad, India, and the Capital Complex in Dhaka, Bangladesh (completed after his death). Even today, Kahn is still affecting architecture by the recent debate as to whether to construct his Roosevelt Island Memorial in New York City that he designed before his death.

During his lifetime, Kahn received many awards and honors. He joined the American Institute of Architects (AIA) in 1935, became a fellow in 1951, and served as the Philadelphia Chapter's director from 1950 to 1952. In 1962, he was named a fellow of the World Academy of Arts and Sciences. He was awarded the Arnold W. Brunner Memorial Prize in 1960, and in 1964 was made a member of the National Institute of Arts and Letters (NIAL). The NIAL also awarded Kahn the Gold Medal for Architecture in 1973. Another membership he was granted was in 1968 with the American Academy of Arts and Science. In 1970, he was named a fellow of the Royal Society of Arts in London. Shortly after, he was awarded a Gold Medal by the Royal Institute of British Arts in 1972. Along with awards and memberships, Kahn received many honorary degrees from higher institutions and was also a visiting professor at the Massachusetts Institute of Technology (M.I.T.) in 1962 and at Princeton University from 1961 to 1967.

Kahn was a well-respected and accomplished architect. However, at the time of his death, he was left with nothing financially and actually owed money. Kahn's death was rather sudden and unexpected. He died of a heart attack at Penn Station in New York City. He was on his way back to Philadelphia from India, where he had been working on the Indian Institute of Management project. Kahn died March 17, 1974.