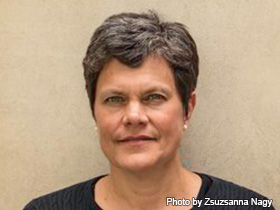 Kasdorf learned the value of words through her unique Mennonite upbringing and has utilized that knowledge in her poetry.

Julia Spicher Kasdorf was born in Lewistown, Pennsylvania, in 1962. She won the Agnes Lynch Starrett Poetry Prize in 1991 for Sleeping Preacher (1992). She later wrote other works of poetry and a biography of Joseph W. Yoder, an Amish American author and musician who had roots in Kasdorf's native Mifflin County. In her works, Kasdorf has written about her life's conversation between her Mennonite heritage and her other life experiences. At the time of this writing, Kasdorf resides in Bellefonte, Pennsylvania, while she works as a Professor of English and Women's, Gender and Sexuality Studies at The Pennsylvania State University.

Julia Spicher Kasdorf came from Big Valley, a small town near Lewistown, Pennsylvania. She was raised by John and Virginia Spicher, Mennonite parents who exchanged rural life for the city. Her Mennonite faith is characterized by values of simplicity and community and their stance against all violence. She grew up in a more progressive Mennonite community in Irwin, Pennsylvania, a suburb of Pittsburgh. Kasdorf went on to attend Goshen College in Indiana and New York University (NYU). At NYU, she received her bachelors, masters, and doctoral degrees.

Kasdorf lived in Brooklyn, New York, for nearly a decade. At NYU, she worked as a student, an instructor, and a poet. She reflects on the compromise between city life and Mennonite culture through her collection of poems in the book, Sleeping Preacher, which won the Agnes Lynch Starrett Poetry Prize (1991). An excerpt from the poem, "Mennonites," explains her culture in her own words: "We keep our quilts in closets and do not dance./We hoe thistles along fence rows for fear/we may not be perfect as our Heavenly Father./We clean up his disasters. No one has to call;/we just show up in the wake of tornadoes/with hammers, after floods with buckets."

Kasdorf left NYU to return to her Pennsylvania Dutch roots as an Assistant Professor of writing at Messiah College in Grantham, Pennsylvania. Messiah is a Christian college affiliated with the Brethren in Christ, a denomination which shares common Anabaptist and Mennonite roots. She stimulated literary life on campus from 1996 to 2000, except during a semester in 1998 when she worked as a visiting professor at the University of Pittsburgh. While teaching creative writing at Messiah College, Kasdorf hosted a number of poetry readings and lectures. With the help of the University of Pittsburgh, Kasdorf published her collection of poems, Eve's Striptease, in 1998.

In 2000, she moved to Pennsylvania State University where she became an Associate Professor in creative writing and was the director of the Masters of Fine Arts (MFA) program for a time. While working at Pennsylvania State University, Kasdorf produced two works: The Body and the Book: Writing from a Mennonite Life (2001), and Fixing Tradition: Joseph W. Yoder, Amish American (2003). The former is a semi-autobiographical collection of essays and poems in which she examines her heritage, her own experiences, and her poetry. The latter was granted the Book of the Year Award by The Conference on Christianity and Literature and recounts the life of Joseph Yoder, who was born into an Amish family in 1872 and lived in Kasdorf's native Mifflin County, where he was a talented musician and author.

In 2008, Kasdorf edited and wrote an introduction for the restored version of Joseph Yoder's most famous book, Rosanna of the Amish, which is well-known among the Amish culture. Like Yoder, Kasdorf emphasizes her cultural background through the arts and humanities.

Her poetry brings a voice to a faith and culture historically silent in America. The Mennonite culture has created much of the rural and small town landscape throughout Pennsylvania, and Kasdorf allows this voice to be heard through her skillful nonfiction writing and her elegant poetry. Her work has been published in The New Yorker, The Paris Review, and Poetry, and she is the recipient of a National Endowment for the Arts Fellowship (2009).

Her poem, Landscape with Desire, was selected for publication by the Public Poetry Project of the Pennsylvania Center for the Book in 2000-2001.

With Michael Tyrell, she co-edited the anthology, Broken Land (2007) - a collection of 132 poems and the first of its kind to focus exclusively on verse that celebrates Brooklyn, New York. In 2011, her collection, Poetry in America, was published, and it explores the social trials of everyday life in lyrical and narrative forms with rural and small towns serving as backdrop.

Wherever Kasdorf goes, she instills an interest in the arts and humanities in her students. Recently, she wrote the Introduction to Fred Lewis Pattee's book, The House of the Black Ring: A Romance of the Seven Mountains (2012), which was republished by the Pennsylvania State University Press. Kasdorf currently teaches at the Pennsylvania State University as an Associate Professor of English and Women's Studies, specializing in Poetry and Creative Nonfiction, and oversees the Writer in the Community project, which she established. She also serves as Poetry Editor for Christianity and Literature.

Julia Kasdorf's recent work-in-progress is a multi-genre project on the topic of sacrifice.