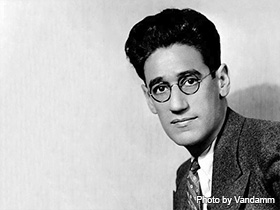 You Can't Take it With You (1936), the 1937 Pulitzer Prizewinner for Drama, was one of many collaborations between Kaufman and Moss Hart.

Born in Pittsburgh, Pennsylvania in 1889, George S. Kaufman won two Pulitzer Prizes for his collaborations in the theatre. He was best known for his sharp wit, his eye for social satire, and his ear for comic speech. He worked and befriended famous actors such as the Marx Brothers and authors such as John Steinbeck. Among Kaufman's literary accomplishments are: Pulitzer Prizes for co-authoring the musical Of Thee I Sing (1931) and the play You Can't Take It With You (1936), authoring the Broadway comedy The Butter and Egg Man (1925), and his collaboration with John Steinbeck on the adaptation for Of Mice and Men (1932).

George S. Kaufman was born in Pittsburgh, Pennsylvania, on November 16, 1889. His parents were Joseph Kaufman and Henrietta Myers, both from families successful in local business. On March 15, 1917, he and Beatrice Bakrow married. They moved into a farmhouse in Bucks County, Pennsylvania, in 1936 and had one daughter. In 1907, Kaufman enrolled to study law at Western University of Pennsylvania (later the University of Pittsburgh). Kaufman's career there was very short-lived, and he soon after moved to Paterson, New Jersey, with his family. His father, who had been employed with the Columbia Ribbon Manufacturing Company, was able to help find him employment as a wholesale ribbon salesman.

When Kaufman met Franklin P. Adams, to whose column in the New York Times he contributed humorous pieces, it marked the beginning of his literary career. Their relationship was responsible for Kaufman becoming a regular columnist and also working as a writer and editor for the Washington Times in 1912. Kaufman cultivated his wit and his eye for social satire in these early journalistic days. He later became famous as a playwright, Broadway producer, and screenwriter for his ability to bring these characteristics to his work.

By the time Kaufman moved to Bucks County, Pennsylvania, he was already a well-known playwright. Kaufman was among the first authors to move from New York City to Bucks County during the 1930s. The influx of artists into Bucks County, known as the "Genius Belt," was a result of weekly advertising by landowners in the New York Times, presenting the serene countryside as inexpensive real estate with an appealing proximity to New York City. Kaufman was among other Pulitzer Prize-winning authors, such asOscar Hammerstein II,James A. Michener, andPearl S. Buck, who all resided in Doylestown and New Hope in the 1930s and 1940s.

The majority of Kaufman's work was done in collaboration with other authors for the stage;Moss Hart, Edna Ferber, and Morrie Ryskind are among some of the more famous writers he worked with. His first solo hit as a playwright came in 1925 with TheButter and Egg Man (1925). This play was packed with 1920s slang, such as the title, which was the name for someone who is swindled into bankrolling a project. Kaufman also wrote musicals for the stage, which he did successfully many times for the Marx Brothers. He earned a Pulitzer Prize for Of Thee I Sing (1931), which was co-written with Morrie Ryskind and Ira Gershwin. He received a second Pulitzer Prize in 1937 for You Can't Take It With You (1936), which he co-wrote with Moss Hart. Kaufman also worked with author John Steinbeck on his farm in Bucks County, polishing the stage adaptation for Of Mice and Men (1932), which he directed for Broadway.

Kaufman passed away at the age of 72 in New York City on June 2, 1961, after a satisfying retirement on his farm in Bucks County.