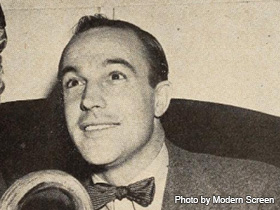 Gene Kelly gained fame in the 1940s for drama and dance. Also known as a choreographer, writer, and director, he is best known for his role in Singin' in the Rain (1952).

Born in Pittsburgh in 1912, Gene Kelly was one of the most skilled and innovative dancers in history. His style and vision revolutionized the Hollywood musical and also helped make dancing, especially among males, a much more popular activity. A graduate of the University of Pittsburgh, Kelly starred in many musicals during his lifetime. Kelly's career got off to a slow start but soon became wildly successful before slowing down in the 1950s. Kelly spent the last few years of his life in his home in Beverly Hills, battling a reoccurring stroke. He died on February 2, 1996.

Gene Kelly was born on August 23, 1912, in the Highland Park district of Pittsburgh. He was the third of five children born to Harriet Curran Kelly and James Kelly. Gene's father was a hardworking traveling salesman who was gone from the house five days a week. This left Gene and his siblings home with their mother, who was determined to have her children be well-versed in the arts.

Thanks to the encouragement of his mother, Gene found himself taking dance lessons from an early age. Although Gene was quite talented in dance right from the start, he always preferred athletics and hoped to play for the Pittsburgh Pirates one day. While he never did get to play for the Pirates, the athletic skills that Gene picked up as a child ended up being quite useful to him later on during his dancing career. Despite his preference for athletics, Gene's mother saw to it that he continued to practice his skills in dancing, and regularly entered Gene and his siblings in amateur vaudeville nights around Pittsburgh.

Even though it was clear that Gene was extremely talented at dance, his mother still felt that it was important that he get an education, and so Gene went off to Penn State University to study economics. Gene was only able to attend Penn State for a year before the depression hit, causing him to take a break from his studies in order to earn money. During this time Gene continued to dance in local theatres and clubs in Pittsburgh. He also worked as a soda jerk and a bricklayer. Despite his family's money problems, Gene was able to finish college at the University of Pittsburgh in 1933 with a degree in economics. After graduating, at the encouragement of his mother, Gene attended law school. Gene was only in law school for a short time before he realized that he just wasn't cut out for it. He quit law school and focused on his dancing career.

While attending law school, Gene taught at a dance studio that his mother helped to manage. After dropping out of law school, Gene dedicated all of his time to helping the school. The school was renamed the Gene Kelly School of Dance and opened for business with schools located in both Pittsburgh and Johnstown. Gene continued teaching for several years, all the while performing, directing, and choreographing for shows in the area. By 1938, Gene felt that he had done everything he could for his career through teaching. It was time to move on. So he packed his bags and went to Broadway.

After arriving at Broadway, it wasn't long before Kelly began to be successful. He had a few big hits, and these quickly got him noticed by Hollywood. He was offered a contract, and headed out to California, but not before marrying Betsy Blair, a woman he instructed while choreographing the show Diamond Horseshoe, in September of 1941. Gene starred in several minor pictures, but it wasn't until MGM studios lent him to Columbia for the picture Cover Girl in 1944 that his skills really became apparent. In Cover Girl, Gene revolutionized both the filming industry and the Hollywood musical with his famous Alter Ego dance. This dance required the combining together of two separate rolls of film so that Gene could be shown dancing alongside his reflection. For one of the first times, a dance number in a musical actually helped to move the story along, instead of just being thrown in the picture. Gene constantly sought to integrate the dance numbers with the plot, so that they could both work together to further the story.

After his performance in Cover Girl, MGM realized what a talent Gene had for musicals, and he was quickly placed in several others including Anchors Aweigh (1945), co-starring Frank Sinatra. Gene's career was unarguably at a new high, but he really wanted to serve his country in the war. So, in November of 1944, he enlisted in the Navy where he served in the photographic division until May of 1946 when he returned to Hollywood.

Kelly's career got off to a slow start when he returned from the war, but it wasn't long before he was back in the swing of things. After another breakthrough withOn the Town(1945) (which was the first musical to be shot outside a studio), Gene moved on to what could arguably be called his two best musicals: An American in Paris (1951), and Singin' in the Rain (1952). An American in Paris was a critically-acclaimed film that won the 1951 Academy Award for Best Picture and six other Oscars, including an Oscar for Gene himself. The fanfare over An American in Paris overshadowed Singin' in the Rain somewhat at the time, but since then, Singin' in the Rain has become one of the best-loved movies in America. In 1989 it was among the first 25 films chosen by the Library of Congress for its National Film Registry of significant motion pictures.

Although his career started to go downhill after Singin' in the Rain due to a loss of public interest in musicals, Kelly still managed to keep himself busy by starring in and helping to produce several shows, none of which really received much critical acclaim upon their release. 1957 proved to be a dismal year for him, as it marked his divorce with Betsy after having been married to her for 15 years. In 1960 however, he remarried with longtime dance assistant and former pupil Jeannie Coyne. During the 70s and 80s, he appeared on a number of retrospectives and awards shows, including a retrospective called That's Entertainment, which he hosted along with Fred Astaire. Unfortunately, in 1975, Jeannie died of cancer, and so Gene was left to raise their two children alone. Later in his life, Gene won several other awards, such as the Kennedy Centers Honors in 1982, and a lifetime achievement award from the American Film Institute in 1985. He is commemorated with a star on the Hollywood Walk of Fame at 6153 Hollywood Boulevard. The last years of his life were spent in his home in Beverly Hills, California along with his new wife Patricia Ward (whom he married in 1990) and his children. Gene had been working on an autobiography, but never got the chance to finish it. On February 2, 1996, Gene Kelly died in his home in Beverly Hills after fighting a series of strokes.