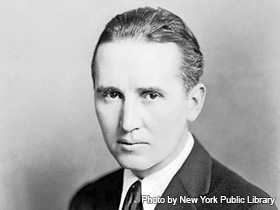 Born in Philadelphia, Pennsylvania, George Kelly quickly rose from a bored actor to become a popular playwright of the twentieth century. Kelly wrote many plays throughout his career that dramatized the American psyche and particularly the American female archetype. Kelly is best known for examining these feminine roles through the play Craig's Wife (1926), which won him a Pulitzer Prize for drama in 1926. In addition to being a playwright, Kelly was an accomplished draftsman, director, and actor. Kelly died in 1974.

George Kelly was born to the famed Kelly clan of Philadelphia, Pennsylvania, in 1887. One of ten children, little is known of Kelly's early life and childhood. Kelly most likely received his education from a combination of private tutoring, private school, and home schooling. During his early education, Kelly became an accomplished draftsman. He became such a prominent draftsman that many new bridges being built in Chile had to have their blueprints stamped, "O.K. George Kelly." However, Kelly was not physically able to keep the demanding job, compelling him to turn to acting for his career.

As a young actor he quickly became disillusioned with the acting material available, which is why he began writing screenplays. Before he could start his writing career, however, Kelly served a year-long active duty deployment to France during World War I. Upon his arrival back to the United States, he began writing his first plays. The first major plays he wrote were The Torch Bearers in 1922 and The Show Off in 1924, which is still popular today. Both plays highlighted Kelly's understanding of American drama and satire.

The success of The Show Off put Kelly in the running to receive the 1924 Pulitzer Prize for drama. Even though famed critic Heywood Brown dubbed The Show Off "the best comedy which has been written by an American," Hatcher Hughes's Hell-Bent for Heaven won the coveted award. A year later, Kelly responded with his best piece yet, Craig's Wife (1926), a dramatic portrayal of the American female domination. The story describes a terrorizing wife who henpecks her husband and the rest of the members of the household. The success of Craig's Wife finally won George Kelly the Pulitzer Prize in 1926.

The portrayal of women in Craig's Wife would follow Kelly throughout the rest of his life. "In nearly every play where they appear, Kelly portrays the female characteristics under his examination as controlling, overindulged, and destructive to anyone within their trajectory," wrote one critic.

Regardless of negative criticism, Kelly continued writing during the 1920s. He produced several more hits, including Daisy Mayme (1927), Behold the Bridegroom (1928), and Maggie the Magnificent (1929). In 1931, Kelly wrote Philip Owen Forth, which was met with strong criticisms and mixed reviews. Critics slammed the play by saying that Kelly's understanding of drama was slipping. Kelly was also criticized for his extreme use of feminine archetypes.

With this criticism, Kelly departed from screenwriting and made a career change to Hollywood, California, where he worked as a director and script consultant during the 1930s.

During the 1940s, several of his earlier plays returned to Broadway and were revitalized. Kelly even returned briefly to direct the newest edition of Craig's Wife in 1947. In 1956, Kelly's niece, Grace Kelly, married Prince Rainier of Morocco. One year later, Kelly retired to Sun City, California, where he resided the rest of his life. He remained there, working occasionally on small projects and continued to write short stories and scripts, none of which had any grandeur. He returned to Pennsylvania in 1974 while fighting an unknown sickness when eventually he died in Bryn Mawr. He was the last of his nine brothers and sisters to die.

It is unclear why Kelly chose to write and portray women in his work the way he did. He did not appear to suffer from any physical or mental abuse as a children growing up from his sisters or mother. Some critics have even attributed his femininity to being a homosexual. While there is no such documentation to prove that Kelly had a homosexual orientation, there is no documentation to suggest he didn't. George Kelly was never married. He died on June 18, 1974, in Bryn Mawr, Pennsylvania.