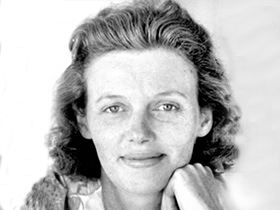 Scranton native, Kerr collaborated on many Broadway plays with her husband Walter, although she is most known for her book, Please Don'tEat the Daisies (1957), which was made into a film starring Doris Day.

Playwright and essayist Jean Kerr was born in Scranton, Pennsylvaniain 1923. After obtaining her education at Marywood College and Catholic University, she married drama professor Walter Kerr. Following a number of unsuccessful productions, she first achieved success with the musical review Touch and Go (1949). In 1957, Kerr achieved her greatest success with her collection of humorous essays on suburban life, Please Don't Eat the Daisies. She also wrote the long-running comedy Mary, Mary in the early 1960s. Jean Kerr died in 2003.

Jean Kerr was born Bridge Jean Collins on July 10, 1923, in Scranton, Pennsylvania. Her parents were Thomas and Kitty Collins. During her childhood, she determined her life's goal was "to be able to sleep until noon." She realized that her own temperament was unsuited to such habits. In the meantime, Jean Collins proceeded with her education, earning her BAat Marywood College (now University) in 1943 and an MFAfrom Catholic University in 1945. At Catholic University she met Professor Walter Kerr, a drama critic and future Pulitzer Prize winner. The couple married on August 9, 1943. They had one daughter, Katharine, and five sons: Christopher, Colin, John, Gilbert, and Gregory. After the burgeoning family moved to the New York suburbs, they became fodder for Jean Kerr's stories.

Jean Kerr began her writing during her MFAyears at Catholic University, in part because of requirements of the program, in part because of her nature, and in part out of necessity. She and husband found living on a teacher's salary difficult. Remembering a tirade from her father delivered years earlier—"the only damn thing you're good at is talk"—she decided to write plays. She collaborated with her husband for her first undertaking: an adaptation of Franz Werfel's famous novel The Song of Bernadette in 1946. While the play was a flop commercially, they were able to continue working in the field. Kerr's first comic play, 1948's Jenny Kissed Me, met a fate similar to Bernadette. By the mid 1950s, Kerr had begun to find her way and her voice, writing sketches and lyrics for 1949's Touch and Go, sketches for John Murray Anderson's Almanac in 1953, and teaming with Eleanor Brooke to write the play King of Hearts, which had a successful run on Broadway. Touch and Go earned a rave review from the New York Times' reviewer Brooks Atkinson, who appreciated the "breezy and informed wit" and called it the best new show of the season.

Jean Kerr's great break was a collection of humorous essays about suburban life called Please Don't Eat the Daisies (1957). This collection, and the works derived from it, became her signature piece. This accomplishment was mentioned in the first sentence of every obituary. Kerr's "wryly observant style" reminded Washington Post critic Richard L. Coe of James Thurber, E.B. White, and Cornelia Otis Skinner, which was high praise indeed. The pieces in Daisies dealt with the situations that a 1950s housewife encountered with her many children. Indeed, Kerr confessed that she wrote a great deal while locked in a parked car to find some solitude from her large family. Please Don't Eat the Daisies became a best seller and a very popular movie starring A-list actors David Niven and Doris Day. The book later became a television series on NBC from 1965 to 1967.

Kerr had one additional great success in the public eye: 1961's Mary, Mary. This play ran for 1,572 performances, an incredibly successful run in the era before the mega shows like Cats and Les Miserables. This comedy about a divorced couple who rediscover their love for each other was made into a film in 1963. Kerr wrote several additional plays before her retirement from the stage in 1980, as well as three additional collections of humorous essays and articles for a number of magazines.