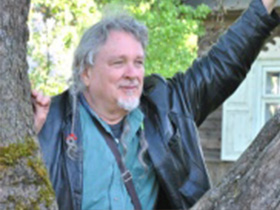 Kerry Shawn Keys was born in Harrisburg on June 25, 1946. He worked for the United States Peace Corps in South India, and afterwards received his Master of Arts degree from Indiana University. He has had various teaching jobs in colleges and started the company Pine Press of which he is an editor and publisher. His poems and works have been published in several countries all over the world and earned many awards.

Elmer Richard Keys, a plumber, and Helen (Kirk) Keys, a clerk and typist, celebrated the birth of their son, Kerry, on June 25, 1946, in Harrisburg, Pennsylvania. Throughout his life, Keys has been married twice and twice divorced. His first wife was Ann James Costello. After their divorce, Keys married Ziza Kearns, whom he also divorced. He now has a romantic partner in Janet Pellam, a poet, fiber artist, and musician.

In 1966, Kerry Keys quit college to join the United States Peace Corps as an agricultural assistant in South India. He continued this work for two years and then finished his Bachelor of Arts degree at the University of Pennsylvania in 1970. He then received his Master of Arts degree from Indiana University of Pennsylvania in 1973. After graduating that same year, Keys took up a teaching position at the Mont Alto Campus of Pennsylvania State University. In 1974, he took up another teaching position. This time he taught at a language laboratory in Rio de Janeiro, Brazil. He worked there for three years. It was in 1977 that Kerry Keys started working as editor and publisher for Pine Press, the company that he and his wife, Janet, now run. While working with Pine Press, he took up teaching once again at the Harrisburg Area Community College from 1979-1984. While there, Keys also worked as an instructor and associate fellow in English at Dickinson College, during which time he lived in New Bloomfield. He would begin working as an English-language escort for official visitors to the United States in 1986' a job he continues presently. In 1991 and 1993, Keys worked at the University of Iowa as an International Writing Program member. It was in 1998 that Kerry Keys moved to his new home in Vilnius, Lithuania, as a teacher of translation theory and creative composition.

"For me, India was so exotic, so different, that it broke down my already abnormal ways of seeing and hearing the world and, through the cracks and the edges, poetry took a stronger hold. I became a romantic poet of the moon, of strange goddesses, of saris and goats, and all that," Keys said of his inspiration and influences. Along with the exotic environments, the following other people and things proved as influences for Keys: Garcia Lorca, Neruda, Tagore, Thoreau, Jung, Italian and Latin American poets, and phenomenology (a philosophy that states that reality consists of human conscious perceptions and of nothing outside of the human consciousness). Keys' poems and works have become popular throughout the world, being published all around and in several languages, like Czech and Lithuanian. While living in Lithuania, he has been hosting a literary salon every two months and has been an active member of the Vilnius poetry community. He has also been the author of plays and a children's book and currently contributes to the periodicals Chiron Review, Milkweek Chronicle, Nation, Northwest Review, Ploughshares, and Prism International. He also writes under the names Zopi and Zopilote. Keys has performed research on Chuang-Tzu texts, East Coast Native American culture, and three books of poems currently in progress: Bones and Buzzards, Broken Circle, and Blues in Green.

Keys' passion for his work has led him to win several awards. He was announced a Senior Fulbright fellow in Salvador, Brazil from 1983-1984 and also a fellow of the Pennsylvania Council on the Arts in 1983 and 1989. Poetry Society of America gave him the Robert H. Winner Memorial Award in 1992 for Bones and Buzzards. Also, his translating skills were rewarded when he won the Neustadt International Prize for Literature in 1992 for his work with A Knife All Blade.

Kerry Keys currently lives in Vilnius, Lithuania, and continues to work as an English-language escort and with his company, Pine Press.