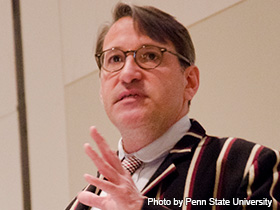 Graphic designer and author Chip Kidd was born in Reading, Pennsylvania, and received his degree in graphic design from Pennsylvania State University. He initially focused on graphic design and book cover design, but soon expanded to author and edit his own graphic novels, as well. Arguably his most recognizable work is the Jurassic Park (1990) logo, originally the cover for the book by Michael Crichton.

Charles “Chip” Iacone Kidd was born on September 12, 1964, to parents Thomas Iden Kidd and Cornelia Ann Iacone Kidd in Reading, Pennsylvania. He grew up in nearby Lincoln Park with his parents and his older brother Walter. His father worked as a chemical engineer for the Prestolite Battery Company, but he also had a creative side that would go on to spark his son’s early interest in art and design. This interest was fostered by the comic books of his childhood, especially those starring Batman. Some of his earliest memories involve watching Batman cartoons on television or dressing up as the hero for Halloween. Kidd is known widely as a Batman aficionado and collector.

In 1982, Kidd attended the Pennsylvania State University’s main campus, where he had his first formal exposure to the field of graphic design while working with designer and professor Lanny Sommese. This led to his study of graphic design, for which he received a BA in 1986. Kidd’s personal work archives are housed in the Penn State Libraries’ special collections at the time of this writing.

Shortly after graduating, Kidd moved to New York City and began his long career at Alfred A. Knopf publishing house, a subsidiary of Penguin Random House. Kidd started as a Junior Assistant to the company’s Art Director in 1986 and advanced to Associate Art Director by 2013. He has worked with thousands of authors, including such figures as David Sedaris, Neil Gaiman, Cormac McCarthy, Dean Koontz, John Updike, and Haruki Murakami to create thousands of book covers. His most recognizable piece, the cover of the Jurassic Park book by Michael Crichton, was created in 1990, and quickly became the face of the franchise. Kidd’s creative and often humorous pieces have been lauded as starting a “revolution” in book cover design. Kidd also spent time freelancing in 1996, creating a broad range of work from magazine covers to posters that continues to expand.

Kidd he has also published writing. In 2001, he released his first novel, The Cheese Monkeys, partly based on his time as a student at Penn State. He also published a book titled The Learners (2008), a sequel of sorts to The Cheese Monkeys. In conjunction with author Lisa Birnbach, he helped write and design True Prep (2010), a successor if not a sequel to The Official Preppy Handbook (1980). He released an introductory guide to graphic design for children, Go: A Kidd’s Guide to Graphic Design (2013). In addition, he has published two compilations of his graphic design work with annotations, Book One: Work: 1986-2006(2005) and Book Two: Work: 2007-2017(2017).

A particular focus of Kidd’s work has been in celebrating and uplifting comic and graphic novel authors, including Charles Schulz, the author of the Peanuts comic. Kidd has also significantly contributed to the archiving and cataloguing of comics and other depictions of Batman. As of this writing, he is also on the advisory board for the Comic Book Legal Defense Fund, a group that helps authors protect their rights to free speech.

Kidd has given TED Talks about his design philosophy that have been viewed millions of times over, and he is invited to speak about his profession at many schools and events every year. Kidd married professor, librettist, and fellow author Joseph Donald McClatchy on November 8, 2013, though his husband unfortunately passed away in 2018.

At the time of this writing, Kidd is editor at large for Pantheon Books, the graphic novel publishing imprint of the Alfred A. Knopf publishing house in New York City. His work has been accredited and rewarded by many design organizations, including the International Center of Photography and the American Institute of Graphic Arts. His Jurassic Park design continues to be the face of the franchise, and his graphic design work is expanding into international markets. He has been working with the company for several decades and continues to innovate and create inspiring pieces of art for his clients.