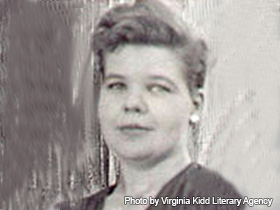 Philadelphia native, Kidd had tremendous influence in the literary world as an agent for numerous authors including Ursula Le Guin.

Virginia Kidd was born on June 2, 1921 in the Germantown district of Philadelphia, Pennsylvania. Her father, Charles Kidd, was a printer. She attended Berlitz School of Languages, developing fluency in several languages. Virginia Kidd later became a freelance writer, ghost writer, and proofreader. However, she preferred reading to writing and decided to become a literary agent. In 1965, she established the Virginia Kidd Literary Agency. After three decades in the profession, Kidd passed away on January 11, 2003.

Virginia Kidd was a literary agent who helped many authors build their reputations and careers in the science fiction genre. She was born on June 2, 1921 to Zetta Daisy Whorley, a Roanoke, Virginia native, and Charles Kidd, a printer from Decatur, Alabama. Kidd was born in the Germantown district of Philadelphia and remained in Pennsylvania throughout her life. At the age of nine, Kidd was first introduced to speculative fiction and would be involved in literary vocations related to that genre thereafter.

She attended the Berlitz School of Languages, where she developed fluency in Spanish, Latin, Italian, French and German. In Latin class, Kidd said that she was "deeply impressed by the fact that ago, agere meant do, drive, make, and about forty-five other possible actions." It is no surprise that her favorite game was Scrabble; she always received the highest score. Though the object of the game was to earn points by spelling out English words, Kidd insisted that words from other languages could be used as well.

Her interests later involved various literary vocations. Shifting focus from foreign languages to English, Kidd wrote poetry and science fiction novels. Her short stories include "Kangaroo Court," which was published in Damon Knight's 1966 collection of short stories called Orbit I, and "Ok, O Che," which was featured in Richard Blair's Aberrations (1995). "A King of King" is one of Kidd's poems that can be found in a collection of 102 poems that James Blish, Kidd's husband, published in With All of Love: Selected Poems (1995). In 1998, "Argument" was included in Weird Tales, a magazine run by George H. Scithers and Darrell Schweitzer that included American fantasy and horror fiction. Kidd also worked as a freelance writer, ghost writer, and proofreader. During her writing career, Kidd married in 1947 to James Blish, a famous science fiction writer, after her divorce from opera singer, Jack Emden. The marriage between the two writers lasted until 1963.

During her marriage to Blish, Kidd established a home-based literary agency in 1965 in Milford, which she dubbed the Virginia Kidd Literary Agency. She represented such renowned writers as Gene Wolfe (A Criminal Proceeding, 1980), Alan Dean Foster (Star Trek: The Animated Series, 1974-78), R.A. Lafferty (Past Master, 1968) and Ann McCaffrey (Weyr Search, 1968). Kidd also worked with Roger Elwood to co-edit her first anthology called Saving Worlds (1973), which is the first showcase of Ursula K. Le Guin's work. Two other anthologies, The Best of Judith Merril (1976), and Millennial Women (1978), came after.

Kidd had a great deal of talent at writing, but her drive and need to write was limited. As she explains in her essay "Agent First, Anthologist Sometimes" in the Denise DuPont collection Women of Vision, "...writing [fiction] is done out of clinical necessity...The fit came on me remarkably infrequently, but when it did happen it took me by the scruff of the neck and shook me, giving me no peace until whatever it was written." Kidd goes on to say, "I liked being a driven writer, but there is no way in the world that that clinical need could be faked or forced." As in the case of "Agent First, Anthologist Sometimes," Kidd realized her lack of motivation was problematic when she had put aside the essay to clear her mind and read a manuscript. "When I was a fair distance into the book and thinking I should put this work aside to do the essay, I suddenly realized that what I was doing is what I was born for: to be an agent and a good enough writer to search out those who can write better than I can—and to help some of them make careers, money, reputations."

After three decades in the literary agency profession, Kidd died of old age on January 11, 2003, in Milford, Pennsylvania. Client and friend, Ursula K. Le Guin (The Eye of the Heron, 1978), wrote admiringly about Kidd after her death. In Le Guin's reflections on Virginia Kidd, Le Guin gives an insight into Kidd's professional world by illustrating her respect for clients and her perseverance to sell their works. Le Guin's first personal experience of Kidd's professionalism and perseverance was when Le Guin wanted to turn her now-classic novel The Left Hand of Darkness into a hardcover. As the book had already been sold to Terry Carr as an Ace Special, it took many difficult steps to buy the rights to the book back and publish the book in hardcover. When the two formed their professional relationship, Le Guin soon realized that "Virginia had clear, strong views on responsibility and seemliness in her profession, and felt that an agent should never solicit a client." Her clients were not simply profitable objects, but writers whose career development and talent tuning were the driving forces behind her career as a literary agent. It was this trait that glued Kidd and Le Guin together, and their relationship flourished with much mutual respect. The two later became co-editors of the anthologies Interfaces (1980) and Edges (1980).