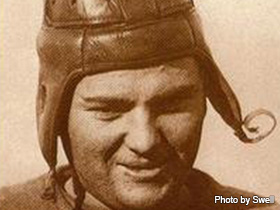 Long time Steelers assistant coach and some time head coach Walt Kiesling was elected to the NFL Hall of Fame.

Walt Kiesling was born May 27, 1903, in St. Paul, Minnesota. He attended St. Thomas College where he played the position of guard on the football team. He then went on to spend 34 years as a player/coach in the NFL, playing for the Duluth Eskimos, the Chicago Cardinals, the Chicago Bears, Green Bay Packers, and the Pittsburgh Steelers. He ended his career in Pittsburgh with an overall record of 30-55-5. He passed away on March 2, 1962, in Minnesota.

Walter Kiesling was born May 27, 1903, in St. Paul, Minnesota. He grew up in Minnesota and attended the College of St. Thomas (now University of Saint Thomas) as a guard for the football team. His debut in the NFL came with the Duluth Eskimos as a two way guard. At 6'2" and 245 pounds he was able to earn the nickname "Iron Man" for his one year, 20 game stay with the team from 1926 to 1927. Kiesling then moved on to play for the Pottsville Maroons in 1928, where he played ten games as a guard. Kiesling was only with the Maroons for one season before switching to the Chicago Cardinals, where he stayed for five seasons. In 1929, 1930, and 1932 he was named to the All Pro Team. By 1934, Kiesling was ready for another change, and so he moved to the Chicago Bears where he only stayed for one season. After 13 games with the Chicago Bears he moved again to join the Green Bay Packers for two seasons.

While playing for Green Bay, Kiesling was reunited with his long time friend Johnny "Bloody" McNally. McNally and Kiesling were teammates for Duluth and Pottsville. When McNally was offered a coaching/player position with Pittsburgh, he decided to capitalize on the opportunity, and also brought Kiesling with him as an assistant coach and part-time player. Kiesling played six games in the 1937 season, and six games in the 1938 season.

After the 1938 season, Kiesling retired as a player, and was named the head coach of the Pittsburgh team for the 1939 season, and stayed through the 1940 season. Kiesling was an unusual coach because he was known for his love of assistant coaching. He was never interested in the head coaching position, but was pushed into that position three times during his 34 years in the NFL. In 1941, Kiesling was with Pittsburgh again, but this time as an assistant coach. In 1942, Kiesling was again named head coach and led the team to a 7-4-0 record. As WWII began, the availability of players was short, and the two Pennsylvania teams, Pittsburgh and Philadelphia joined to form the Steagles, with Kiesling and "Greasy" Neale as co-coaches. This merger of two teams was one of the key points in the NFL. By joining the two teams, Kiesling became a part of an event that would ultimately save the NFL during WWII. The Steelers had another merger with the Chicago Cardinals in 1944 and Kiesling became the co-coach with Phil Hendler.

After 1944 Kiesling headed back to Green Bay for four seasons as an assistant coach, before he again returned to Pittsburgh as an assistant coach. In 1955 he was again named the head coach of the Steelers and remained as such until the end of the 1956 season when he retired because of poor health. His overall coaching record was 30-55-5.

He retired to Minnesota where he lived until his death on March 2, 1962. He was named into the Pro Football Hall of Fame and was known for his winning record with the Steelers.